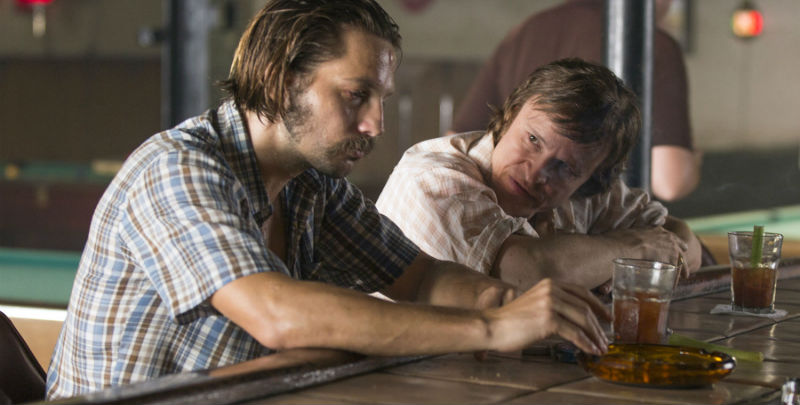 The aftermath of collective trauma tends to bring out the best in crime fiction. A reasonable crime reader might very well feel partial to the fiction that followed the Depression, WWII, the Korean War, Florida, or any number of anguishes experienced en masse here in the States and elsewhere. Personally, I’m drawn to stories about the period after the Vietnam War. Some fifty years on, the sins inflicted and suffered during those years feel most relevant to the nation we’ve become—our divisions, aspirations, and appetites, our restlessness and our consciences.

I’ve seldom seen the crime novels exploring that era grouped together, unless they happen to be lumped under the vast ‘70s’ umbrella. We’re still working out just what happened during those years, both in America and abroad, a quest that’s given rise to some of the finest crime novels in memory. Here, I’ve collected here a few favorites that look at the cultural landscape following the Vietnam War, whether through a contemporary or historical lens, directly or indirectly. Some of these books deal with the conflict, others are very particular manifestations of it, in the form of veteran PIs, lost children, shattered families, addiction, or just plain-old era-appropriate disenchantment. These are just a few selections, born of a desire to see James Crumley and Newton Thornburg side-by-side with Vu Tran and other contemporary authors.

Consider this a modest start toward a canon of post-Vietnam War crime fiction: an excuse to re-read some favorites and hopefully inspiration for other authors to tackle this important subject anew. 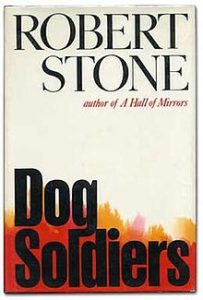 A fever dream of postwar America, a road trip novel through the burnt-out wreck of California as it moves into the 70s, when disenchantment, boredom, and hard drugs untethered swaths of the population and left them vulnerable to all manner of hustlers and false prophets. A jaded war journalist decides to turn to heroin smuggling and brings a shipment home on his friend’s account, linking up with his friend’s wife. That’s more or less where things go dramatically wrong. The pair leaves the city and starts driving west. The danger following them is real, but there’s also something much darker than pissed-off traffickers at the heel. Stone’s Dog Soldiers became a seminal text for disaffected youth across the country, but especially those returning home from war only to find themselves out of step, ostracized, or just wondering what the hell had happened—a generation of young men, drafted and armed, who came to recognize just how little anyone in power cared about the value or quality of their lives. 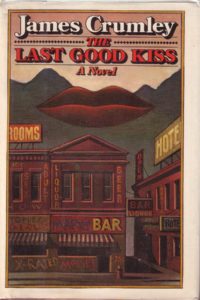 Among the finest crime novels ever written, The Last Good Kiss hardly mentions Vietnam yet managed to define an era and a life philosophy for a restless, snakebitten generation still clinging to some kind of illusions. CW Sughrue is a private investigator based in Montana. He claims to focus mostly on repossessions and divorce work (among the very few tasks he felt equipped to perform after washing out of the service), but really he’s a modern-day cowboy, always on the move, possessed of an archaic and nagging code of morality, and just about always intoxicated. Crumley’s speed-and-whiskey fueled jaunt through the 70s West stands up against any novel written in the latter half of the 20th century, with the search for Betty Sue Flowers standing in for a generation of runaways and worried, remorseful parents, a few of whom have $86 dollars to spare and a vague acquaintance with the reluctantly noble Sughrue. 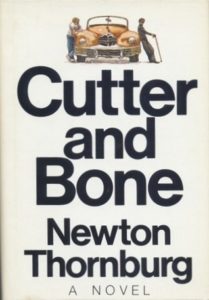 Another high-water mark for the genre, one that directly treats the stain the war left on American identity. Cutter, a disabled vet, and Bone, the Lennie to Cutter’s George, wander the California coast, burning up with resentments, boredom, and rage at their own helplessness. Eventually, the two split Santa Barbara for the Ozarks, after convincing themselves the perpetrator of a grave crime (one Bone is made to believe he witnessed) can be found there and brought to justice. Their quest distills all the anger of the era—against politicians, corporations, commanders, enemies real and imagined, and of course against the men’s own demons. Thornburg’s novel is now rarely mentioned among the greats of the second half of the 20th century, but anyone who reads Cutter and Bone will have little doubt of his place in the pantheon. 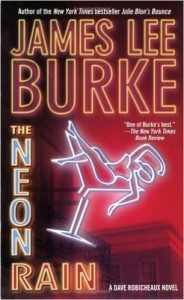 The war-brought-home is among the most important themes running through Burke’s Robicheaux series. Dave Robicheaux, first a detective with New Orleans PD, then later in the country with New Iberia, is a haunted man, back from the war plagued with nightmares and a sense of guilt he can never quite shake. The scourge of alcoholism chases after him, too, and Burke handles the subject as well as any novelist alive. But it’s the landscape—topographical and political—that most bedevils his hero. The bayous of Louisiana are a close cousin to those of Vietnam, and those murky waters seem designed to conjure up difficult memories for Robicheaux. In the first novel of the series, Neon Rain, the contras’ fight in Central America rears up, too, an unwelcome reminder that America is full of corruption and is doomed to repeat its sins again and again. 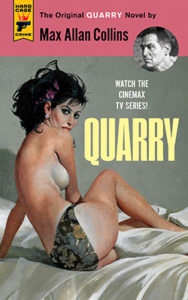 Max Allan Collins’ Quarry is a kind of American allegory and a profile of a lost generation. Quarry is a Marine sniper returned home from Vietnam to Memphis, emotionally and technically unequipped to do much of anything for employment. The culture has left him behind. He finds himself strong-armed into becoming an assassin for local organized crime figures. The series has strong pulp qualities, and there’s something mesmerizing about Quarry’s rituals as he goes about his “work.” But the social critique is also very real. The series began with 1976’s The Broker (or Quarry), when men and women very much like Quarry were themselves returning home from a mostly reviled or forgotten war. Hard Case Crime recently gave the early novels a facelift, and a short-lived, but utterly transfixing Cinemax series gave Max Allan Collins’s creation new life. 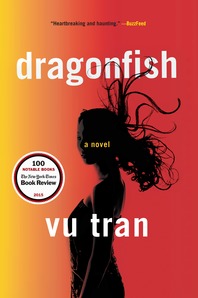 Dragonfish, on the surface a classic ‘cherchez la femme’ detective story, is also a sustained meditation on the persistence of trauma—across oceans, generations, time—and the inability to truly know all the ways in which we’re haunted by the past. When Suzy, a Vietnamese refugee settled in California, walks out on her husband and reappears in Vegas on the arm of a gangster, only to walk out on that man, too, three lives are thrown together in an uneasy alliance and in a grappling with Suzy’s complex past—from Vietnam, to the relocation camps, to her early days in the States. The war may have ended in 1975, but for many, that was only the beginning of an impossibly difficult journey, a life to be endured (and to occasionally flee), not enjoyed. 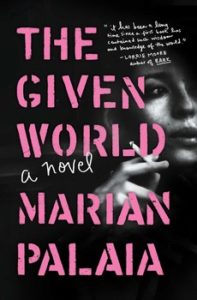 Marian Palaia, The Given World

Palaia’s 2015 debut begins in Saigon, where her heroine, Riley, has gone as part of a journey to discover what happened to her brother, a soldier presumed dead, lost in the Cu Chi tunnels. His unexplained death is a stand-in for a generation’s disenchantment—sent off to die in a foreign land, serving a quagmire rather than a cause. But in The Given World, the upheaval at home is even greater. Riley is born and raised in Montana, but like many her age, ran off to the Bay Area the first chance she got. Palaia’s evocative portrait of life on the fringes of the counterculture go beyond the timeworn cliches to something richer and much darker. Together, the many strands of The Given World make up an elegy for an interstitial generation—not the hippies and boomers who take every opportunity to celebrate their cultural achievements, but a vast mass of disoriented youth desperately searching for some form of meaning, and finding precious little. 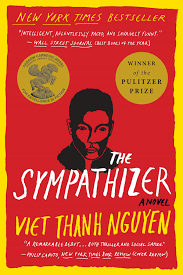 Viet Than Nguyen, The Sympathizer

Nguyen’s 2015 novel, which helped earn the author a Pulitzer and a MacArthur Fellowship, is an appropriate capstone to the sub-genre, offering up not so much revisionist or even alternative history, but an infinitely more nuanced and complex perspective on what was happening in Vietnam and the US during those turbulent decades. To call The Sympathizer a spy novel is no slight. Much has been made of it transcending the constraints of its genre, but better to think of it as the fulfillment of an august form, one that grapples with divided allegiances, the nature of language, and the uncanny manifestation of the self–and if it’s entertaining to read to boot, so be it. In The Sympathizer, our narrator, a mole in the American-supported South Vietnam forces, struggles between two masters and a half dozen identities. His work takes him from Vietnam to California, the (possibly rotting) epicenter of postwar American culture. He goes to work in Hollywood, of course, and in many ways, his story runs parallel to others on this list, except that accidents of history, geography, and imperialistic drive force his life into an even darker place. 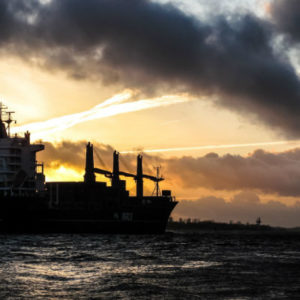 The world’s oceans cover seventy-one percent of the Earth’s surface. Every day, more than fifty thousand merchant cargo...
© LitHub
Back to top