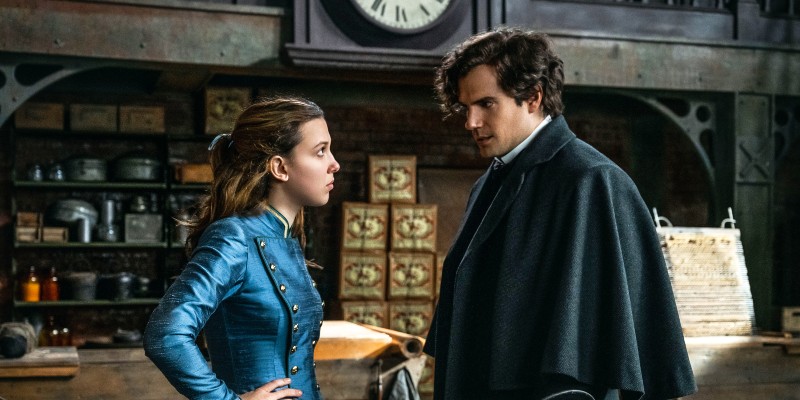 With a standout sequel, Sherlock's little sister now has one of the more entertaining franchises in mystery.

Netflix’s sequel to Enola Holmes, cleverly titled Enola Holmes 2, is a very elaborate presentation, with a great number of side elements and subplots attached to an excellent historical mystery, one that involves real-life characters and situations. I expect some will say that the romance, action, and comedy distract from the main story, while others will see those embellishments as helping to sell a whodunit based on a factual injustice. At a couple of places, I found myself wondering if the love story, the dance hall number, the rooftop chase scene, the ballroom gala, the prison break, the sword fight, and the many asides spoken directly to the audience were all necessary, but Millie Bobby Brown is so appealing as the protagonist and her costars are so in step with her that I found the whole thing hard to resist.

The production certainly looks impressive; Netflix didn’t scrimp on the first movie, and for all I can tell they upped the budget for the sequel. Street scenes, costumes, luxurious interior spaces, and all the rest look top-shelf, as do additional visuals, such as Enola’s deductions appearing as animated sketches, and a guide to Victorian mores and manners coming to life in defaced engravings. We enter this stunningly attractive world by arriving at the doorway of Enola’s newly-opened detective agency, which soon runs into problems; prospective clients can’t believe that the young woman behind the desk is anything but a secretary, and ask if her famous brother Sherlock (Henry Cavill) will be helping her out. As she’s closing up shop, unable to attract any clients, Enola is approached by Bessie (Serrana Su-Ling Bliss), an impoverished and orphaned girl who works in a match factory. Bessie’s sister-by-circumstance, Sarah Chapman, has vanished, and Bessie is willing to pay everything she has, which is hardly anything, for Enola to find what happened to her. Like Sherlock, Enola isn’t motivated by money to solve mysteries, and she dives into the case—which means posing as a girl in the matchstick factory.

Here is where Enola Holmes 2 makes a very strong claim for its right to exist; Enola experiences first-hand conditions in a sweatshop where Dickensian conditions would be an improvement. And she does this in a guise that even her brother could never pull off–how many detectives in fiction or otherwise could believably pass as matchstick girls? A typhus epidemic in London’s slums have caused factory owners to send away any girls with symptoms, and the girls who do get to work have to do so amid phosphorus and other noxious chemicals. If Enola is looking for the scene of a crime, it’s right there, and its victims number in the hundreds.

Prowling through the factory, Enola deduces that Sarah stole pages from the ledgers, accidentally leaving behind strands of her long red hair. She also runs into another girl in the factory, Mae (Abbie Hearn), who tells Enola in no uncertain terms to stop nosing around. Thinking that Mae is protecting Sarah, Enola follows her to a boisterous theater, where the stage show features Mae as a chorus girl and where Sarah had previously appeared as well, winning the attention of a wealthy admirer who slipped her a love note, which of course Enola finds.

While all of this is going on, other people in Enola’s life have kept active in their own crusades. Her mother Eudoria (Helena Bonham Carter) continues her activities as a radical activist, fighting for women’s suffrage and occasionally blowing things up. Sherlock hunts down criminals, though his latest case, involving widespread financial fraud, has him flummoxed. And Lord Tewkesbury (Louis Partridge) rallies in Parliament for progressive reform. As in the first film, Enola continues to carry a torch for Tewkesbury, though she’s far too proud to throw herself at his feet, and for his part Tewkesbury has no idea how to approach someone as unconventional as Enola. While mysteries abound in this movie, one thing that is clearly NOT a mystery is whether these adorable people will get together in the end.

As headstrong and independent as she is, Enola ends up needing everybody’s help when she is marched off to prison on a murder charge, arrested reluctantly by Lestrade (Adeel Akhtar) and more gleefully by Lestrade’s boss Superintendant Grail (David Thewlis, once again demonstrating his endless appetite for playing unsavory, villainous, or at least just suspicious characters). Her case and Sherlock’s case prove to be linked, but in addition to the societal forces who openly exploit labor, another villain has been hatching nefarious schemes, and Sherlock becomes aware of a sinister player named (dramatic pause) MORIARTY.

Conventional criminals aren’t as intriguing as those who operate with complete sanction of the law, and Enola Holmes 2 is at its best when the story returns to Bessie and the other girls in the match factory, toiling for pennies as the factory’s owners win government accolades at elegant receptions. Sarah Chapman, as it turns out, was a real activist who campaigned to improve working conditions in horrifying match factories of the time. Even though Enola can escape from such conditions, it’s not hard to draw parallels with her social strata, where women are told to behave correctly and support a social order that supposedly protects them but is more focused on punishing women who step out of line.

Enola and Sherlock investigate together, with friction at first but increasingly harmoniously, working their way toward the recovery of Sarah and the exposure of the treasury fraud thief. Enola also perceives that, like her, Sherlock is in need of an occasional shoulder to lean on, though a romantic partner is not in the cards since we all know how the great detective regards THAT business. After seeing Cavill do a fine job as Holmes in the first movie, but not do any real detectiving, it’s great to see him actually work as Holmes does, even getting physical for an extensive fight scene finale.

One minor spoiler is that this film ends with Sherlock Holmes taking a roommate, a doctor named Watson (Himesh Patel). For Holmes sticklers, it’s a slightly unwelcome jab; Holmes in the original Arthur Conan Doyle stories might possibly have had a younger sister, but it’s established in A Study in Scarlet that Holmes and Watson become roommates before Holmes is famous, or at least before Watson’s ever heard of him (it’s Watson’s stories of Holmes’ exploits that make him famous). This minor upending of the timeline won’t bother many, but it makes it more difficult for hardcore Holmes fans to place the story in the chronology of the sleuth’s cases.

Another bigger spoiler, and more of a personal peeve (and stop reading now if you want to avoid a major reveal at the end of the movie); Moriarty turns out to be a woman, which strikes me as a misstep. By making her case that she was driven to crime by a lack of opportunities and recognition, and that her thefts and murders are her ways of getting back a repressive society, Moriarty becomes a tad sympathetic. And if there’s one thing about this character that’s true in any story in which he/she appears, it’s that Moriarty is wholly unsympathetic, to the point of being almost inhuman. In the original stories and in the many that have followed, Moriarty is an unredeemable psychopath, a person with great gifts who has made a firm choice to use them for personal gain and the humiliation of everyone else. But I don’t begrudge the actress (a very good Sharon Duncan–Brewster), and it does open up dramatic opportunities. And maybe I’m the only one who wants to see Moriarty as 100% evil. If Enola needed a mastermind nemesis of her own, the series missed an opportunity by not making it Moriarty’s younger sister.

In any case, the first Enola Holmes promised good things, and the second film delivers, in developing its characters (though not really Eudoria, who’s perfect as she is) but especially in the romance department. Since their relationship won’t possibly be conventional, there are plenty more stories for Enola and Tewkesbury, and since she’s a Holmes, plenty more mysteries await her. And if Brown and her collaborators can incorporate more worthy but little-known episodes from history into their future films, then I will happily eat the spinach they have artfully tucked into my sundae.

The Probable and the Personal: How I Grapple With Writing Violent Fiction 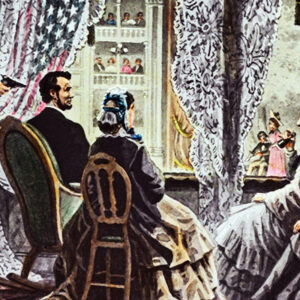 An assassination. A hanging. An axe murder. How much of the way I tackle these topics in YA true crime caters to teens...
© LitHub
Back to top