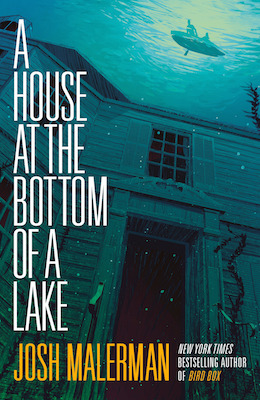 The following is an exclusive excerpt from A House at the Bottom of the Lake, by Josh Malerman. It's summer, and James and Amelia can feel themselves falling in love. Eager to find a place where they can be alone together, they are excited to discover an old, intact house on the floor of a lake, which they quickly decide to make their own. They swim inside. And then they discover they are not home alone.

The third lake felt inhabited. Or like it once was. Or maybe it was just that whoever used the service drive came here often enough to leave some energy behind.

“Deliverance,” Amelia said. But that was silly. They weren’t in the backwoods of Tennessee. And besides, that’s what everybody said when they were in a canoe and felt a little weird about their surroundings.

There shoreline was crowded with tall pines that rose from dark-green shrubs.

The water was murky, as if the mud from the lake floor had come up to see who had cleared the tunnel.

“I can’t believe my uncle never told me about this,” James said.

But Amelia thought she understood. Given the grandeur and beauty of the first two lakes, there was no reason to ever visit this third one. It was an afterthought. The clogged gut­ter of an otherwise beautiful home.

And there was a smell to it, too. Not quite garbage, but like personal belongings no longer needed. Amelia had smelled something like it at estate sales with her mom and dad.

“What’s it?” They were paddling again, going farther from the tunnel, getting closer to the middle of the new lake.

“It feels like we’re seeing something we shouldn’t be see­ing. Something private.”

James cocked his head to the sky.

“Do you smell that?” he asked.

“I think so,” she said. But she wondered what he thought it was. “What do you smell?”

“Old age!” He turned around and smiled at her.

Amelia smiled, too. She thought of the first lake. Should they go back to it?

“It’s not so bad,” she said, wanting to remain positive. “If this was the first lake we saw today, I don’t think it’d look so dismal.”

“Yes. It’s all about comparisons.”

“Even if we hadn’t seen the other two?”

“But we did see the other two.”

It wasn’t small, but it wasn’t huge, either; about half the size of the first lake and two-thirds that of the second. There were fewer trees at the shoreline, and they could see where the mountains slipped coldly into the water. They were pad­dling toward them.

The word seemed to float up and out of the water, slip wet into Amelia’s mind.

“Are you hungry still?” James asked. “We didn’t really finish our lunch.”

The question was jarring, Amelia thought. Out of place. But why?

Because you guys were eating lunch on the second lake. This is the third lake now. Things are different here.

She looked over the edge of the canoe. A fish floated on its side, a foot below the surface.

But it was more like the fish was looking up, looking at her.

“I’m okay,” she said, but the fish unnerved her. Was something wrong with the water? Dead fish in a lake was, of course, natural. But it was more about the look in the fish’s eye, like they’d made actual eye contact, fish and girl.

Amelia looked quick to James. She’d been thinking of the fish when he yelled. Was he yelling about the fish?

He lifted his paddle out of the water and Amelia did the same.

James was staring at the lake’s surface, wide-eyed, too wide-eyed.

They drifted past it, over it, a small bird in its sky, a tiny airplane for two.

It was true then; they’d both seen it. A house. Submerged. A rooftop beneath the surface. And yet, it was so dark down there . . .

James snapped back first, jammed his paddle into the water, and started paddling in the opposite direction, driv­ing the canoe in reverse. Amelia did the same.

Over the house again.

Without speaking, they gripped the edge of the canoe at the same time, their fingertips touching the chipped paint. Sunlight tap-danced across the surface, a glittering curtain, a welcoming, a reveal.

But not much of one.

It’s all she could think to say.

If the shingled roof was any indication, it was a big house.

They looked at each other at the same time and it was stated silently that they were going to check it out. They were going to go into the water. No self-respecting seventeen-year-olds on a first date could paddle away from this.


A House at the Bottom of the LakeDel ReyJosh Malerman 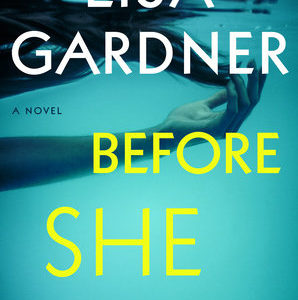 Before She Disappeared The Boston public school system is a mystery to me. I grew up in a small community. One elementary school, one middle school,...
© LitHub
Back to top