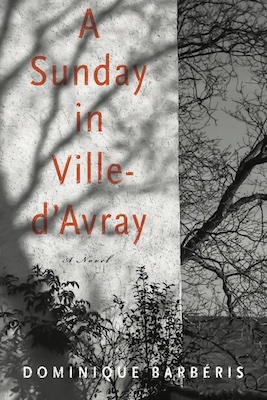 The following is an exclusive excerpt from A Sunday in the Ville D’Avray, by Dominique Barbéris and translated by John Cullen. One evening in a quiet Paris suburb, two sisters meet and talk about their childhood dreams and secret hopes. And Claire Marie, who is married, confesses to her sister that she has had an encounter with a mysterious man.

“In fact,” my sister murmured without looking my way, “it made me think of someone. I had an…encounter, years ago, didn’t I ever tell you? Something happened to me.”

The word sounded bizarre, what with all the shad­ows. I stopped singing at once. I remembered Mama’s frequent command: “Go see what your sister’s up to.”

Actually, in some respects, Claire Marie reminds me of the ducks you sometimes see, ducks that look as though they’re gliding on the water without making any movement at all themselves, but under the surface, their feet are paddling like mad. There’s something trompe-l’oeil about those ducks.

“A very curious story, it’s true,” my sister went on. “I didn’t understand what was happening to me. I’ve never understood myself.”

She shot me a glance and then turned toward the cedar in the middle of her yard. The evening darkness was growing thicker. The lines of the tree trunk still stood out against the background of vegetation, but you couldn’t see the details of the branches anymore.

“Bear in mind,” said Claire Marie, “in stories like this, there’s never anything to understand. And they’re not very interesting.”

I didn’t react at first. I told myself that if I insisted, Claire Marie would stop talking. I knew her; she’d make some trifling remark, get up, and go to turn on the exterior light, and then mosquitoes would begin to rise up dreamily in the luminous beam, as they used to do in the old days in Fromentine, because of the heat, the darkness, the freshly watered lawn. We’d sit there in silence and watch them; and once again, the chance would pass. The chance for me to figure out what was going on with my sister.

But she didn’t get up. She didn’t turn on the light. She seemed lost in her reverie, and her eyes stayed fixed on the tree.

I thought that our memories were like that cedar, that they had a solid trunk hidden in shadow. At night, when you lean out and look at the garden, you think everything’s pitch black, but that’s wrong. There, in the heart of the shadows, are those solid trunks. And if you walked in the dark without paying sufficient attention, you’d bang your forehead and give yourself a terrible bruise.

I asked, “Someone you still see?”

“Oh, no, certainly not! It’s been over for a long time. As I said, it simply came back to me. On Sundays— don’t you think?—certain things come back to you more than on other days.”

She raised her too-thin arms, her bony elbows; she pulled her hair back and tried to fix it; she said, “On Sundays, you think about life.”

And yet her story began in the most banal way. She’d filled in as a secretary in her husband’s medi­cal practice one afternoon. That day, she’d noticed a pa­tient in the waiting room. Was it because he appeared to be more silent than the others? Or because it was rare to see male patients at that hour? In the dead center of the afternoon, when a small, temporary community made up of elderly people, children, and mothers fills doctors’ offices, there he was in their midst.

As always, there was a kind of agitation in the wait­ing room. Women would come in, sit down, take off their children’s jackets or push back their hoods to ex­pose their faces, help them blow their noses, break out some cookies for them, speak to them softly, tell them stories. Or they’d page through magazines, as though at the hair salon, move around, ask the whereabouts of the rest room, and my sister would direct them with a dis­creet gesture and a smile.

The man didn’t move. There was something massive about him, something silent, almost austere. His dark hair was straight, fairly long, brushed back, and he sat perfectly still, with his hands resting on his knees. Only once did he get up and approach the desk to verify the time of his appointment.

“You won’t have long to wait,” said Claire Marie. “The doctor’s running just a little late.”

He simply nodded and sat back down. Every now and then (she noticed), he looked at her.

Christian opened the door. My sister checked the ap­pointment register and called out, “Monsieur Hermann?”

The man stood up, thanked her. After he went into the consultation room, she examined his entry in the register: Marc Hermann, 4:00.

When he came out to settle his bill, he lingered in front of her desk for a while, took out his cards, paid in cash, met her eyes again, and asked in an accent she couldn’t identify, “Are you the secretary?”

The evening was very mild when she left the med­ical office. Christian had gone ahead—he had a few house calls to make. A damp smell rose from the vege­tation in the gardens. It was in September, she tells me, more or less like now, just a little later.

Mélanie had brought several friends home with her. The living room was filled with little girls playing with their Barbies.

“They were at that age,” my sister said. “Five or six years old. It’s strange, I have a clear memory of that eve­ning; I can see myself returning to the house, and all those little girls are there, squatting down and manipu­lating their dolls; I went and sat in the kitchen; I could hear them playing ‘ladies.’ After that, they wanted to watch some cartoons; they adored a cat who had prob­lems with a bird or a mouse. You know the cat I mean,” she said. “I can’t remember its name . . . I think it was around even when we were kids. Didn’t we watch a cat too, one that hopped around on two legs, as elastic as a piece of chewing gum? It was always chasing after the same bird or the same mouse, and it would get tied up by its own tail or catch its paw in a door. Remember?”

I pointed out that most cartoons have cats in them.

I took a few sips of my juice; I too thought about the presence of little girls in a house, with their scratchy woolen leggings, their tangled hair, their way of kneel­ing on a chair next to a radiator, of staying there for hours, noses pressed against the windowpane, and what they’re waiting for, what they’re looking at, not readily apparent. They like cartoon cats, they make them laugh, because they naturally identify with the mice, which are weaker, but ten times smarter:

I’m too clever and you

My sister went on: “That night, after Christian came home and I was putting Mélanie to bed, she asked me to tell her the story of the Little Mermaid.

“It was very warm in the room, and I was in no mood for storytelling. I remember that Mélanie’s cheeks were damp. The piece of flannelette she was playing with, twisting it under her nose and over her chin, had a floral pattern; I recognized the fabric as what was left of one of my nightgowns.

“I recall that when I said, ‘In the end, the Little Mermaid returns to play with her sisters in the immense Kingdom of the Sea,’ when I pronounced the word ‘Kingdom,’ I saw an image of the sea in summer under the eight o’clock sun. I felt like leaving there and then.

“It lasted only a brief moment, because after I kissed Mélanie, as I was closing her bedroom door, I told my­self I was lying to her, because the Little Mermaid dies. What ideas, I thought, what ideas we put in their heads. They’re only children! Those wounds! Those knives! Even fairy tales are too hard. Everything’s too hard.”

Maybe a month later, as Claire Marie was walking home after running some errands, a car pulled up alongside her. The driver lowered the window, and when she bent down, she was surprised to discover the man she’d seen once at her husband’s office; she recog­nized his slight accent, which he corrected with very careful articulation. He smiled and said, “We’ve met be­fore, I think. Aren’t you the doctor’s wife? Can I drop you somewhere? You’ve got a heavy load.”

“What would you have done in my place?” my sis­ter asked.

I thought about it; I said, “I wasn’t in your place, but it sure was a funny coincidence. In any case, if you really were weighed down, it was very nice of him to offer you a ride, and very understandable too. Besides, he was one of your husband’s patients.”

“Exactly my reasoning,” said my sister. “I accepted.”

Congratulations to the Winners of the 2021 Edgar Awards 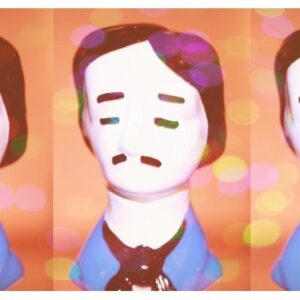