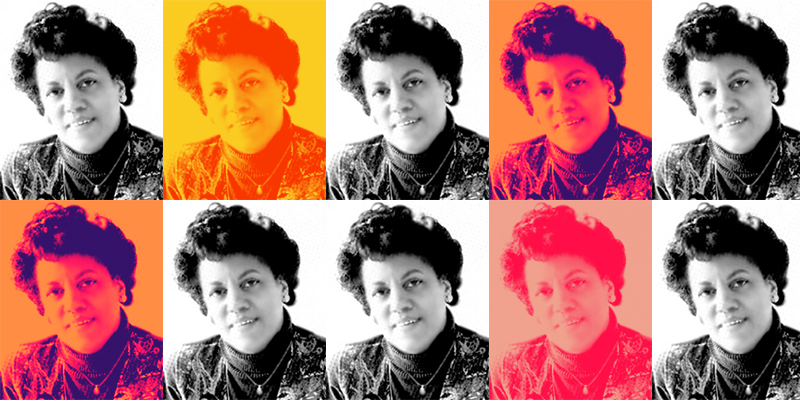 Judges and Winners of the Sisters in Crime's Eleanor Taylor Bland Award celebrate Black Women's History Month by discussing how best to honor Bland and her work.

Via Sisters in Crime

Nearly a decade ago, Sisters in Crime created the Eleanor Taylor Bland Award, a $2,000 grant that “is intended to help an emerging BIPOC writer with a novel-in-progress or early-career work of crime fiction. It also supports developmental opportunities, including workshops, online courses and research.” Submissions for the award remain open for submissions until May 15. Previously, we’ve interviewed the winners of the award, but this year, we did something different, asking the judges to reflect on Bland herself, and how crime writers and readers can continue to show her work the respect and love it deserves. Thanks so much to David Heska Wanbli Weiden, Mia P. Manansala, and Yasmin A. McClinton for contributing to the discussion.

David Heska Wanbli Weiden, an enrolled citizen of the Sicangu Lakota Nation, is the author of the novel Winter Counts (Ecco, 2020), nominated for the Edgar Award, the Barry Award, and the Hammett Prize. The book was the winner of the Lefty Award for Best Debut Mystery Novel and the Spur Award for Best Contemporary Novel. The novel was a New York Times Editors’ Choice, main selection of the Book of the Month Club, and named a Best Book of 2020 by NPR, Publishers Weekly, Library Journal, and other magazines. He lives in Denver, Colorado, with his family.

Mia P. Manansala is a writer from Chicago who loves books, baking, and badass women. She uses humor (and murder) to explore aspects of the Filipino diaspora, queerness, and her millennial love for pop culture.

She is the winner of the 2018 Hugh Holton Award, the 2018 Eleanor Taylor Bland Crime Fiction Writers of Color Award, the 2017 William F. Deeck-Malice Domestic Grant for Unpublished Writers, and the 2016 Mystery Writers of America/Helen McCloy scholarship. She’s also a 2017 Pitch Wars alum and 2018-2019 mentor. 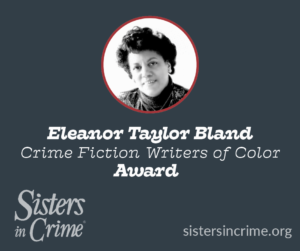 CrimeReads: Can you tell us a bit about Eleanor Taylor Bland and her influence on the genre?

Mia P. Manansala: Although I had never heard of Eleanor Taylor Bland before I first applied for the award, once I saw her bio, I immediately searched out her books. Her Marti MacAlister series featured one of the first—if not the first—Black female police detectives, and is set in a fictional town in the Chicagoland area (my hometown!).

When she died in 2010, she was one of the most prolific Black writers in our genre, writing over 14 novels, several short stories, and also editing an anthology. That anthology gathered Black mystery writers together for a collection titled Shades of Black: Crime and Mystery Stories by African-American Authors, and this is where I think her legacy truly lies.

When I was announced as the 2018 winner, numerous people reached out to not only congratulate me but to let me know what a wonderful woman she was. How she wrote and spoke with humor and frankness and grace. How she was a great friend, advocate, and mentor. And how she was the glue that held the Black mystery community together. Even though much of her work is out of print, I love that this award allows her legacy to live on, and that she gets to continue making an impact on up-and-coming BIPOC crime writers long after she’s gone.

Yasmin McClinton: Eleanor Taylor Bland was a Black female author who wrote crime novels about characters who looked and acted like the audience who read them. She was one of the first authors to write in a predominantly White, male led genre. I think, her influence was to amplify minority voices, especially the voices of Black women.

CrimeReads: What marked her work as trailblazing?

Yasmin McClinton: There was an article of an interview, Ms. Bland had in which she said something like, “she believed minorities were underrepresented in most things and that she wanted them to be center stage.” I thought that line was so unbelievably profound because it is absolutely true, still to this day. She didn’t want minority characters to be the sidekick or the help or the neighbor across the street whose only job in the story was to make the White character look better. She wanted to give voice to her characters of color and make them agents of their own stories. That’s what marks her work as trailblazing. That when she didn’t think the trail she was on served her or others like her, then she blazed a new one that we all now follow.

CrimeReads: As judges for the Eleanor Taylor Bland award, what do you look for in submissions?

David Heska Wanbli Weiden: I’m looking for an original voice, a unique concept, captivating characters, and compelling prose. In short, a great story! I really hope that emerging crime writers of color will submit their work for this award—it’s a great opportunity.

Yasmin A. McClinton: I’m looking for a story to that fully immerses me from the beginning. I can take a slow burn, but I have to know it’s all building up to something that’s going to make me feel like whoa. I like characters who are very voicey and feel so real that I find myself talking back to them.

CrimeReads: What do you consider to be Bland’s greatest legacy?

Yasmin A. McClinton: I think it’s the same answer as before. Her greatest legacy is to empower writers of color, women writers of color to go out there and make their work the new norm that makes the publishing industry, and the world, finally take notice and accept us as easily as they would accept White writers. Oh, and not accept us with the condition of only writing about specific spaces like “insert your underrepped group here” trauma.

CrimeReads: What work needs to be done still to carry on that legacy?

David Heska Wanbli Weiden: Writers need to continue to support organizations such as Sisters in Crime, Crime Writers of Color, Voices of Our Nations, and others. It’s also important for established writers to take on mentorship and support roles for emerging authors. I’ve been so fortunate to have been assisted by a number of generous authors, and now I try to pay that forward by supporting writers through the AWP mentorship program and other groups.

Yasmin A. McClinton: The work that needs to be done is that offers to highlight writers of color isn’t just subjected to and reaction to some trauma that the culture has just gone through. Gatekeepers often say they can’t connect with voice but the writing is great! I heard that so many times. But what does it mean when a White person says they cannot connect with the voice of a Black character or another character of color? Is it that there is a creative issue with how the author writes that character? Or is it because while everyone can lose themselves in a White character and never second guess what that character does, with a character of color, they cannot put themselves in that character’s world? I think more often than not, it is the latter that prevents so many writers of color from having the publishing world open to them. And lastly, gatekeepers need to stop using the excuse of “lack of originality” to reject a story from an author of color. Just because a story was written a million times by a White author doesn’t mean when a writer of color writes the same kind of story with a character of color is unoriginal. The very fact that the story, told a million times over, now has a character of color and written by a writer of color makes it original. So publish it with all the blessings, please.

CrimeReads: How has Eleanor Taylor Bland influenced your own work?

Yasmin A. McClinton: Me? Oh she’s gave me courage to really go for it with my work and put my underlapped characters in spaces where they aren’t usually seen doing things they aren’t usually thought to do, but in real life do all the time. She influenced me to make living while a Black woman the new normal for people who don’t look like me.

CrimeReads: April is Black Women’s History Month—beyond Eleanor Taylor Bland, who are some other folks from crime fiction history that you’d encourage crime readers to check out?

David Heska Wanbli Weiden: In terms of crime fiction history, I’ve been arguing for some time that the Native American crime writer Louis Owens should receive more credit for his contributions to the genre. He pioneered an indigenous style and form of crime fiction that was unique for its time. I’ve also been a fan of Chester Himes and Barbara Neely for many years and would encourage readers to check out those authors and their works.

A great place to find exciting new mystery and suspense writers is the Crime Writers of Color web site, https://www.crimewritersofcolor.com.

Mia P. Manansala: Barbara Neely and Valerie Wilson Wesley are definitely up there as predecessors (Valerie is still alive and recently released the first book in a new cozy series), but we’ve also got some amazing Black women crime writers publishing fun and exciting things now, like Kellye Garrett, Rachel Howzell Hall, Tracy Clark, Cheryl Head, Alexia Gordon, V.M. Burns, Alyssa Cole, and so many more. Names to watch out for are Yas A. McClinton (of course!), Nekesa Afia, and Wanda Morris, all of whom debut later this year.

Yasmin A. McClinton: Oh wow…history wise, Eleanor Taylor Bland is who I know in the crime fiction space as a female writer. But if you want others of color, Walter Mosley hands down is prolific with how he weaves a story around a character of color and makes you really care about that character as if they are real! There is the late Eric Jerome Dickey too. And David In non-crime spaces but more fantasy and horror, there is Tananarive Due, LA Banks, and Octavia Butler. Most recently, there is Kellye Garrett who as the best voice, in my opinion. I don’t know how she does it. My co-judges Tracy and David–Mia too are also authors readers will love along with Rachel Howzell Hall and Jennifer Hillier. Oh, and Stacy Abrams has her first legal thriller coming out soon so I look forward to reading it too. 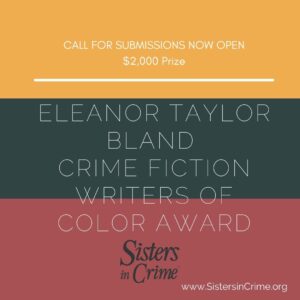 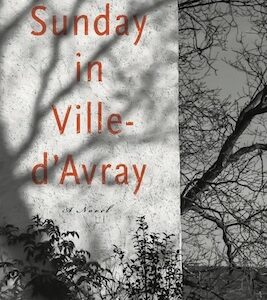 “In fact,” my sister murmured without looking my way, “it made me think of someone. I had an...encounter, years ago,...
© LitHub
Back to top