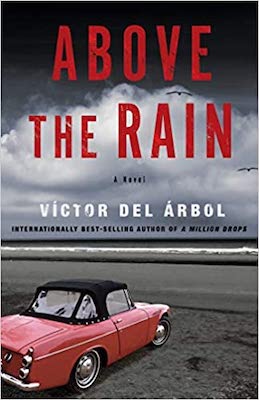 The following is an exclusive excerpt from Above the Rain, by Víctor del Árbol and translated by Lisa Dillman. When Miguel and Helena meet in a nursing home, they believe there lives have already been lived to the fullest. But when a rude awakening causes them to take a road trip, their lives will intertwine with Yasmina, a young Moroccan girl living in Sweden, who is being drawn into its criminal underworld.

It all came to a head in the most surprising way. One morning, Miguel heard the key in the lock and assumed that Natalia had forgotten something, since she’d only said goodbye five minutes earlier. But his daughter was not who appeared in the door with a triumphant smile.

“What are you doing here?” he asked, not even attempting to hide his hostility. He hated Gustavo as intensely as he’d once loved him, years ago.

Miguel had trouble finding his words, had to chew them up and let them out like mush.

“You are no longer part of this family.”

Gustavo shrugged. It was his most characteristic gesture. Basically, he didn’t care about anything not directly related to him.

“I think you’re wrong. Natalia hasn’t told you, has she?”

“Your daughter and I have decided to give it another chance. We’re seeing each other again.”

“That’s not true. Natalia can’t be back with you.”

Gustavo swung the handful of keys with which he’d just opened the door.

“That’s not your decision to make, Miguel. Your daughter and I still love each other.”

“You can’t even spell the word. You’re nothing but a trickster.”

“Really, can’t we just forget the past?”

“Well, it’s clear that you have. But I can’t forget what you did to my daughter.”

When Natalia first brought a polite, good-looking young man home, in her last year at university, Miguel and Águeda breathed a sigh of relief. Natalia had been through a lot of heartbreak and suffered bouts of depression; she took failure hard and was too fragile for this harsh world. And Gustavo seemed like a nice kid: he had a good head on his shoulders and a clean look about him. They both thought he’d make their daughter happy. But long before they could have suspected, it all turned into a nightmare. As newlyweds, Natalia and Gustavo moved to Barcelona and started coming back to Sevilla less and less. At first this seemed normal for a pair of newlyweds, and Águeda was forever making excuses for them: they needed to be alone, to live in their own bubble.

But slowly the explanations became less plausible, and a series of strange accidents began to occur. One day Natalia showed up with a swollen lip and said she’d tripped; weeks later, she had a black eye that she blamed on some kids who’d been playing ball and hit her. She had bruises on her forearms that she hid by wearing long sleeves even in summer, claiming she had very sensitive skin. Gustavo’s insolence started to come out at their rare family reunions; he’d make fun of her in public, treat her as if she were an idiot, and be condescending. And Natalia flinched, as though skittish. She quit work, stopped seeing the friends she’d known her whole life, and almost never picked up the phone. This went on until the day she was admitted to the hospital. She claimed it was an accident, that the car had run her down. But the witnesses’ testimony differed: Natalia and her husband were arguing in the street, he shook her violently, and actually grabbed her by the hair. She tried to wrench free, and he shoved her into the street. The car dragged her for several meters, breaking her humerus and causing multiple injuries. She could have died, but still refused to press charges against her husband.

It took two more years for her to be free of him, but it wasn’t Natalia who made the decision. It was her husband, who decided to move on to a younger victim. Since then, Natalia hadn’t had a stable relationship.

“If there were any justice in this world, you would be in jail.”

Gustavo scratched his beard. He had that phony carefree attitude that some artists tried to cultivate. He was over forty, but tried to appear under thirty, with his mop of hair, trendy clothes, and a stupid smirk that was always plastered on his face.

“We should just wipe the slate clean, Miguel. Kids change everything.”

Miguel blinked as though someone had flashed a red- hot knife before his eyes.

“What nonsense are you talking about?”

Gustavo regarded  his  ex-father-in-law  scornfully. He gave a little tut and then nodded.

“I suppose Natalia also forgot to tell you that you’re going to be a grandfather. Too much good news for one day?”

Miguel opened his mouth to get a breath of air. He felt an anvil pressing down on his chest.

“Ask her. Your daughter is pregnant, and believe me, it wasn’t the Holy Spirit who did it.”

Like a bull struck with a hammer, Miguel cocked his head with his mouth half-open and his eyes in a blank stare. Gustavo used his advantage to go in for the kill. He’d always hated the old fucker.

“I just hope you don’t dare try to meddle in our lives. Natalia told me about your illness. I’m sorry—really I am, it’s a bitch. But you have to think about her, Miguel. Your daughter is going to be a mother, and she doesn’t need you burdening her. It would be best for you to go, move into a home. I hear they’re like five-star hotels, and you’ve got plenty of cash.”

Miguel let his head drop heavily. If anyone pricked him with a pin, not a single drop of blood would have come from his veins at that moment.

“You will not be with my daughter as long as I’m alive.” Gustavo clenched his jaw. His eyes glinted in hatred; he could have snapped the old man in two like a straw. But that wouldn’t have served his plans.

That night, when Natalia walked in, Miguel was waiting for her on the sofa. She realized immediately what had happened: the smell of Gustavo’s cologne still lingered in the apartment.

“When were you planning on telling me?” Natalia set her purse and keys down on the table.

“I don’t know. I was waiting for the right moment.”

“Hard to explain? Have you lost your mind?”

Natalia flushed. The words had been festering inside her for some time, and when she let them out, it was like opening the floodgates, a torrent of blame, justification, and resentment for her father.

“Don’t you treat me like a child. I’m not a little girl, despite what you think. You never loved Gustavo, and you’re not willing to give him a second chance. You’re so harsh, and you judge other people, unable to accept their mistakes. But when it comes to judging yourself, there’s a different standard.”

“Mistakes? The man beat you every week. He put you in the hospital. You asked me to come get you in Barcelona, and I did.”

“But people change. And I love him.”

“You cannot love the man who almost destroyed you.”

“I do, I love him, and I don’t care what you think. He asked for my forgiveness, and we’re back to the beautiful things that made us fall in love to begin with. He stopped hanging around those old friends, the ones who got him into coke—the cocaine was what made him have those violent outbursts; he’s better now, for months he’s been seeing a psychiatrist who specializes in anger management …And now I’m pregnant.”

“How could you be so senseless?” Natalia glared angrily at her father.

“I plan to take care of my baby and have a good life and a good family. That’s my right, my decision, and no one is going to stop me. You can accept it or not, but I won’t let you decide what is or is not in my best interest.” Natalia would have kept going, but a knot of anguish caught in her throat and she burst into tears.

Miguel listened to her reprimands and sobs unmoved, stupefied.

“If that man comes back into your life, I’ll walk out of it. Forever.”

“Don’t threaten me, Papá. I’m not the girl who’d do anything to keep from disappointing you anymore.”

“You have to make a choice, here and now.”

Natalia stared at her father in shock. He held her gaze, unyielding. Then she nodded slowly. Her voice had turned cold.

“If you can’t accept me living my own life, then…”

Miguel felt a hand reach through his body and wrench out his insides.

From ABOVE THE RAIN by Victor del Árbol, translated by Lisa Dillman. Recently published by Other Press.

John Steinbeck wrote a werewolf murder mystery, but you can't read it. 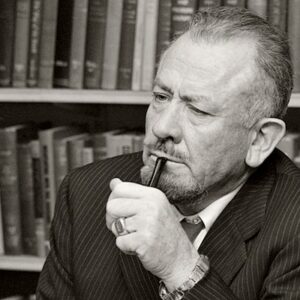 John Steinbeck wrote a werewolf murder mystery, but you can't read it. Before Nobel Laureate John Steinbeck became an essential part of the Western literary canon, he was an unpublished writer...
© LitHub
Back to top