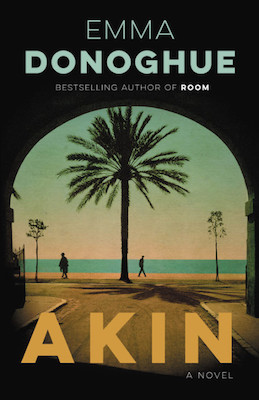 The following is an exclusive excerpt from Akin, the new novel from Emma Donoghue. Noah is a retired professor about to visit to the French hometown he has not seen since childhood, when he receives a sudden phone call informing him that he is the only guardian of an eleven-year-old boy. The two depart for France together, slowly forming a bond as they piece together their mysterious family history—one that has remained hidden to Noah for his whole life and which will change everything.

He followed the child’s call into the next room. “Is that your mom’s guy?” Michael asked.

“Where?” Horrified, Noah  stared  over  the  boy’s shoulder  at a group of Nazi officers giving the Sieg Heil salute in Place Garibaldi. “Shh, I don’t know for sure that she even-”

Michael cut in. “No, down here. With the stick.”

Yes, the suave man leaning on a cane had a familiar air to him. This could very well be the dandy shown in profile in Margot’s photograph.

Maurice Brener (alias “Zazou”) was known for sartorial grace, according to the note below the photo, and never seen without jacket and tie, although in constant pain from  childhood  polio. An old friend of Abadi’s (who was that, Noah  wondered?), Brener supplied false identity papers to the Marcel Network; he also secured funds from French and American Jewry  to support its work.

Hang on, who were these people? Noah stared up at the large letters: GROUPES DE LA RESISTANCE. He must have walked by this whole section the first time. So his mother had taken a photo of a natty Jewish hero? “It says Zazou was his nom de guerre-his code name in the war,” he murmured as he read. “Z, like MZ on the back of the hair picture!”

Could there possibly be a connection? Brener had a wife back in Paris, Noah discovered from the  next paragraph.  But could the MZ woman in the photo have been a comrade of his, passing as Madame Zazou in Nice?

Head whirling, Noah pulled out his envelope of small snaps. The MZ picture was clearly taken indoors, but from behind-and maybe without its subject’s knowledge? Whereas this Zazou guy had been standing in the street. Outdoor photography had been verboten, so had Margot crept up behind the  man, doing her best to record his face, but managing no more than a side perspective?

Noah was feeling sick. “I have to go talk to someone for a minute, Michael. Don’t get in any trouble.”

In a conference room, a small cluster of people were chatting over some open folders. They had the air of a study group rather than an organizational meeting, and after all the door was open, shifting slightly in the draft. So Noah steeled himself and tapped on it to apologize for disturbing them. He was visiting from America and he had these photographs…

They were very kind, and one of them found Monsieur Benoit in the archive for him.

He wasn’t the old Niçois Noah had been expecting but a middle-aged man wearing a yarmulke over short cornrows; an Ethiopian Jew, Noah guessed from his accent. Monsieur Benoit switched from French to English, in which he was even more fluent. Yes, he confirmed that the dandy picture could very well be Brener, aka Zazou. But the MZ photograph rang no bells for him. “And this I would say with a degree of certainty is Odette and Moussa themselves,” he added, plucking out Noah’s shot of the couple on the bench.

“Moussa Abadi and Odette Rosenstock, I should say. They founded, they effectively were, the Marcel Network. To hide the children?”

“Sorry, I never heard of any of this till today. My mother…  all I know is that she was in Nice during the war.” Noah  stared at the back of the bench in the photo. “You can’t even see the people’s faces in this shot.”

“True, but if you look at other images of Odette and Moussa… ” Benoit led him back to the room where Michael had spotted the photo of Brener with his cane.

Noah stared dully at Rosenstock and Abadi in close-up, then walking arm in arm down the Prom, as the archivist explained  that this extraordinary pair and the little knot of allies they’d enlisted had managed to save many hundreds of Jewish children. Yes, Noah could see the resemblance now; something about how they sat together, as well as their individual outlines. Such an ordinary-looking pair; angels in disguise.

He wished he’d never brought Margot’s strange pictures into this building. Was Monsieur Benoit too polite to wonder aloud why the photographer and her subjects weren’t looking one another in the eye?

“Perhaps your mother knew them?” Monsieur Benoit suggested. “Perhaps.” Noah writhed inside. He wished he’d never brought Margot’s strange pictures into this building. Was Monsieur Benoit too polite to wonder aloud why the photographer and her subjects weren’t looking one another in the eye? If she’d been anything to these Marcel people, Margot had been their Judas. “That one was probably  her  boyfriend.” Michael, popping  up at Noah’s elbow and pointing at Zazou like some glib ghost. “Don’t be silly.” Underneath  his  coat,  Noah’s  armpits were dripping. “I think my  young great-nephew’s got  the wrong end  of the stick.”

Monsieur Benoit shook the boy’s hand and said he was delighted to meet him.

Scowling, Michael pulled away and headed for the door. Noah knew he’d better follow him.

“Oh, and one more thing, about your photograph of the young child?”

“Yes?” Noah hung back, holding that one out.

Monsieur Benoit read the scrawled leters, Rf. “All I can speculate is that it was taken for an identity document.”

“There was no rule against smiling.” Its dimensions were rather unusual for an identity photograph, Monsieur Benoit agreed, but there was no compulsory shape or size, and after all, the same negative could have been printed for different purposes.

Noah’s nose was dripping; he had to go into the bathroom to wipe it with toilet paper.

Behind a stall door, a familiar beeping. “Michael?” he asked.

The boy emerged. “I was just playing my game and a woman told me off for making noise.”

But Michael was pushing out through the door already.

Noah thought he’d better use the toilet himself before the long bus ride back to the hotel.

Outside, the February breeze cut sharply and he couldn’t  see the boy at all. Panic flared. “Michael!”

He found him around the corner, slashing at  a flowerbed  with a stick.

“Stop that this instant.” Michael beheaded another.

“Those are for everyone to enjoy,” Noah told him. “I let you out of my sight for two minutes and you disgrace me-”

Michael’s eyes narrowed. “I disgrace you?”

Noah was already regretting the word. “Well, you’re my relation, and you’re behaving like-”

The kid cut him off with a contemptuous sound in his throat. “Just a few goddamn flowers, dude.” He dropped his flail and fell into line behind Noah, pushing his earbuds in. Music thumped from his hood.

After they’d walked for a few minutes, Noah turned and made  a gesture that meant “Take them out.”

“I can hear you fine,” Michael said, too loud.

“That’s not the point.” Noah spoke deliberately softly. Michael poked his screen to pause the music. “What?”

“I don’t want to have  to  guess  whether  you  can  make  me out over your music, so please be civil enough not to wear your earbuds when you’re talking to me.”

“Listen, I’m sorry I called you ‘silly.'” Noah heaved  a  breath. “I was embarrassed. Ashamed, actually.”

“Because she was running around on your dad ?”

He shook his head. “It’s me who got hold of the wrong end of the stick. The people in the photos-they were in the Resistance, rescuing kids from the Nazis, and my mom … I don ‘t think she was their friend at all.”

Noah’s voice dropped to a whisper, even though there was nobody else on the street. “My best guess is that she was surveil­ling them. Recruited, because she could take covert photos and print them.”

“Recruited by … the enemy.” 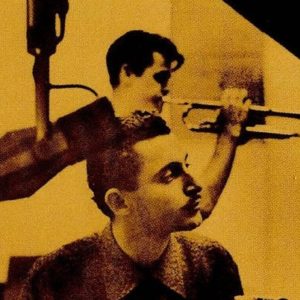 The Long, Proud Tradition of Jazz-Infused Crime Novels Jazz and noir go hand in hand, like two ingredients meant to be savored together—like chocolate and peanut butter. Jazz...
© LitHub
Back to top