“I was born with the devil in me” is a killer sentence, and not just metaphorically since Herman Webster Mudgett, the man often called “America’s first serial killer” and best known as H.H. Holmes, penned it in his 1895 jailhouse confession. It’s a line that’s so powerful, it inspired my entire Stalking Jack the Ripper series.

One blustery afternoon in January of 2013, I curled up with a piping hot cup of chai and dove into a story about brutal murders, as one does. This book was all about the notorious conman and his infamous crimes across America, and, most specifically, Chicago during the 1893 World’s Fair. It also happened to be written by the White City Devil himself.

Filled with mystery, murder and lots of mayhem, it was the kind of read that made me check the locks on all my doors. Inside the book, Holmes confessed to twenty-seven murders, though that might be one more fabrication to add to a lifetime full of them. Ultimately, only nine murders could be confirmed. Some confessions he made were proven false when the alleged murder victims were found alive and well, leading police and the public to speculate on what else he may have lied about. Conspiracies have cropped up over the years about him being Jack the Ripper, and that might be the most un-far-fetched tall tale yet.

One fact remains; we may never know the true scope of the White City Devil’s crimes, but like Jack the Ripper, the mystery surrounding this infamous villain has captured our attention for over a hundred years.

Article continues after advertisement
We may never know the true scope of the White City Devil’s crimes, but like Jack the Ripper, the mystery surrounding this infamous villain has captured our attention for over a hundred years.

It wasn’t just Holmes’ murders that were gruesomely fascinating, it was his account of how he’d gradually turned into the devil that kept me turning the pages well into the night. Born in Gilmanton New Hampshire in May of 1861 to an affluent family, he was still a child when his interest in death turned darkly obsessive. He claimed that a group of children—who bullied him in school—locked him in a room and forced him to touch a skeleton. This encounter with the dead transformed terror into something else entirely—instead of fearing death, he’d later create it. Other reports say he performed surgical procedures on animals both living and dead, but the evidence isn’t strong enough to confirm it one way or another.

When he was eighteen, Holmes enrolled in the University of Vermont to study medicine, but by 1882 he transferred to the University of Michigan to continue his medical studies. While there, he worked in an anatomy laboratory, honing his skills of dissection. It was this part of his past that sparked the idea to create a main character who was fascinated with carving the dead. Except I wanted my death-obsessed lead to be a young woman apprenticing under her uncle in London. In the Victorian Era, human dissection was a taboo subject for a man to study, and was even worse for a young, wealthy woman. Her background as a lord’s daughter was another nod to Holmes’ affluent childhood. But my brave, anatomy-focused heroine wasn’t the only character in my books to be given traits from this true life serial killer. Another rumor circulated about him calling himself “Holmes” as an homage to Sir Arthur Conan Doyle’s famous detective, Sherlock Holmes, which planted the kernel of an idea to give my main male lead Sherlockian deduction skills to track this predator.

Using him as loose source material for each of my books, I included facts from his life into each location for the murder investigations. Historical records show that Holmes actually traveled on the RMS Etruria, the setting I used for the third book in my series, before he began building his labyrinthine murder castle in Chicago.

In 1889 Holmes broke ground on what would be called his “Murder Castle,” a three-story hotel with a pharmacy and jewelry store located on the lower floors, and an upper “hotel” with false doors, chutes leading to a basement with an incinerator, gas chamber, and many other horrors. If ever there was an evil genius, it was H.H. Holmes. He hired construction crews and fired them as they built sections of his hotel, ensuring that no one knew the true layout of his devil’s playground. By 1891 his “Castle” was complete and he began luring prey by placing ads in newspapers. Many young women answered the call, excited for a chance at independence during a time that was still chokingly restrictive for them. It’s unknown how many walked away from the World’s Fair Hotel once they entered it, but some estimates put his death toll around two hundred. With a custom incinerator located in the basement, capable of burning bodies to mere ash, we’ll never know the true body count.

A theory I came across several times during my Holmes research was his possible Ripper connection. There are many arguments about who Jack the Ripper really was, but something about Holmes always made me wonder if he was indeed the infamous serial killer who terrorized London. So many puzzle pieces seemed to fit nicely with the “Holmes as the Ripper” theory—the personality, the medical background, the fact he was in London at the time of the murders, his handwriting closely resembled Ripper letters sent to police, an eye witness claimed an American was the last person seen with a Ripper victim, and more.

One of the more interesting things that emerged about Holmes being the Ripper came from his great-great-grandson—Jeff Mudgett—after he’d read two of Holmes’s private diaries. (Bloodstains, 2011) One theory claimed Holmes had trained an assistant to kill the women in London, and that his true mission was to harvest their organs so he could make a serum to increase his lifespan. That possible motive was where the idea of harvesting organs to cheat death came from in Stalking Jack the Ripper. Speaking of inspiration—one of the reasons I made Frankenstein a favorite novel was because Holmes’s most trusted associate—Benjamin Pitezel—had been called his “creature” in real life.

Now, I’m not fully convinced Holmes is the Ripper, but it certainly gave me lots to work with while crafting this series. One of the best parts about any unsolved mystery is researching and coming up with your own theories. Who do you believe Jack the Ripper was? Maybe one day we’ll finally have an answer to that question. Until then, I’d like to believe an unstoppable detective captured the devil back in 1894.

Kerri Maniscalco grew up in a semi-haunted house outside NYC where her fascination with gothic settings began. In her spare time she reads everything she can get her hands on, cooks all kinds of food with her family and friends, and drinks entirely too much tea while discussing life’s finer points with her cats. She is the #1 NYT and USA Today bestselling author of the Stalking Jack the Ripper series and can be found online (@KerriManiscalco) and her on website kerrimaniscalco.com. 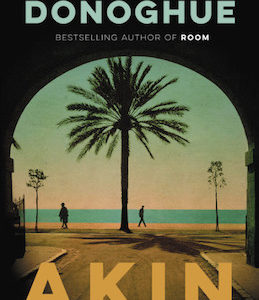 "Noah?" He followed the child's call into the next room. "Is that your mom's guy?" Michael asked. "Where?" Horrified,...
© LitHub
Back to top