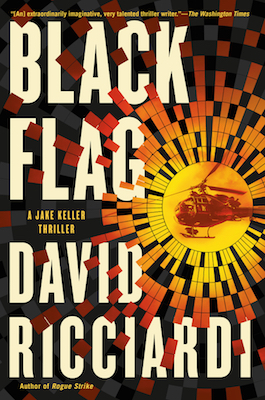 The following is an exclusive excerpt from Black Flag, by David Ricciardi. There is a new phenomenon of merciless, high-tech piracy on the high seas, but CIA officer Jake Keller has a plan to locate and capture the mastermind running the operation. But when CIA backup reveals an ulterior motive and Jake's involvement with the heiress to a Greek shipping fortune become known, he is plunged into a dangerous game, far more personal than he could have ever planned.

It was a bad week for peace on earth.

Born the scion of a Greek shipping dynasty, the young man was said to have seawater running through his veins, but he cared not for the wheeling and dealing of the industry or the megayachts and private jets that came with it. His relationship with his family was strong, but its enormous wealth brought him neither pride nor shame—it simply did not define his existence. When he graduated from high school and the time came for him to choose between col­lege and the family business, he decided instead—so he would for the rest of his life—to chart his own course.

The young man ventured 1,400 miles northwest, to the Dutch port city of Rotterdam, where he found work as an ordinary seaman at a competing line. He signed on under an alias—a wager to prove to himself that he had earned his position—and was soon scraping paint, cleaning heads, and scrubbing decks. He worked hard, learned quickly, and moved rapidly through the ranks on everything from 150-foot tramp freighters to 1,200-foot oil tankers. Soon there wasn’t a crewman’s job aboard any ship, anywhere, that he couldn’t handle.

So he left the industry.

But he wasn’t finished.

He was just getting started.

The young man moved to Belgium and attended maritime col­lege, where he spent four years studying navigation, load handling, and engineering before returning to the sea as a ship’s officer.

Strikingly handsome, with a square jaw and wavy dark hair, his resemblance to his father grew as he aged until, by his late twenties, even strangers would comment on the similarity. Once he’d attained the rank of ship’s master, he resumed using the family name. No one he’d served with would dispute that he knew his ships and the sea as well as anyone who’d ever commanded a merchant vessel.

In short order he was hired by the largest shipping company in the world to drive supertankers across the seas, taking 1,400-foot-long behemoths through storms that would frighten a statue and across oceans so vast that the crew would often go days without sighting another ship.

But as the years passed and the ships became more automated, the crews became smaller and satellite telemetry made him feel less like a master and commander and more like a bus driver. By the time he was in his late thirties, he’d moved back to his family’s shipping line, where he could once again manage the voyage and not simply optimize fuel consumption based on computer models and satellite predictions of weather and current.

With Asia to his north and Africa to his south, Captain Romanos was at the helm of the 860-foot M/ V Lindos as it steamed east through the turquoise waters of the Gulf of Aden.

“I’ve never seen that before,” he said, mostly to himself.

Sixty feet wide and with walls of glass, the oil tanker’s bridge offered a spectacular 360-degree view of the world as the sun fell through scattered clouds and disappeared below the horizon. The ship’s officers watched the sky and sea meld into blackness, inter­rupted only by the stars above and their reflections on the water below. Though they’d seen it happen a thousand times before, its mystical beauty never failed to reinforce their calling to the sea.

It was five past midnight when the captain prepared to retire to his stateroom and turn the bridge over to his second‑in‑command. Romanos was halfway to the door when the navigator spoke up.

“I’ve never seen that before,” he said, mostly to himself.

The navigator and most of the other officers had come with him from the larger shipping company where they’d worked together for nearly a decade. They’d become like brothers, spending more time with one another than they did with their own families, and they’d learned to trust one another’s judgment and anticipate one another’s thoughts. Together they’d survived typhoons, been boarded by un­friendly navies, and had more barroom fistfights than anyone could count.

As far as the captain was concerned, the navigator had seen ev­erything.

“All three radars are full of static,” said the navigator. “Lost the GPS too.”

“Radio?” said the captain, nodding toward the single- ideband.

The communications officer turned up the volume.

“Nothing but noise. Same with the VHF.”

The captain looked at the chief engineer. “It could be electrical interference, but—”

The doors on both sides of the bridge burst open.

Six men in black and gray uniforms stormed in, three on each side, with rifles snugged in tight against their shoulders.

For as long as anyone could remember, ships’ crews had been instructed to cooperate when boarded. They would be threatened, they might even be abused, but their value as hostages decreased by 100 percent if they were dead. It had been the same with the airlines. Pilots had been told to appease hijackers because most were looking only to make political statements or maybe catch a ride to a forbidden destination. More often than not, all of the hostages were released safe and sound.

Cooperate and live. It had worked for most of modern history.

But piracy was experiencing its 9/11 moment.

The captain faced the gunman closest to him. The tall man’s blue eyes locked on like a hawk tracking its prey, but the captain stared right back.

The pirate fired three rounds into his heart.

Captain Romanos was dead before he hit the ground.

Two days later and a thousand miles to the north, a security guard met three trucks covered in dust from their long journey through the desert. The guard escorted the small convoy through the seaport’s high-security gate to a darkened warehouse and parked outside by the door while the trucks drove inside.

A lieutenant colonel from Iran’s Revolutionary Guards stepped down from the lead vehicle and began issuing orders to the forklift operator who’d been collecting overtime for the past four hours, waiting for the trucks to arrive. The lift operator had just finished unloading a dozen crates of rifles and rocket-propelled grenades from the first truck and was on his way to the second truck when two soldiers grabbed the warehouse’s metal doors and slid them shut in the security guard’s face. 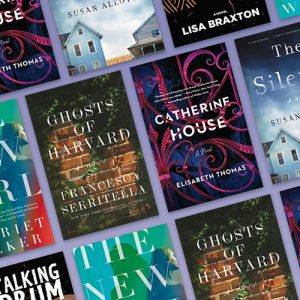 5 Debut Novels You Should Read This May Breaking into the crime game isn’t easy, but every month, a few brave and talented souls make a go of it. For readers,...
© LitHub
Back to top