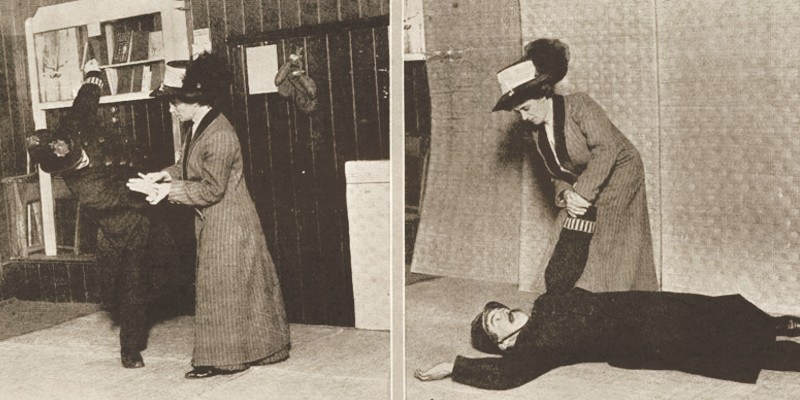 Or, how to incorporate late 19th century suffragette self-defense movements into a Sherlock Holmes pastiche series.

Ask any Sherlock Holmes fan why the great detective is famous, and they’ll most likely answer that the source of his fame lies in his intelligence and powers of deduction. But dealing with murderers and felons isn’t just an intellectual exercise; confrontations with London’s underworld can mean danger and violence. So Holmes’s creator, Sir Arthur Conan Doyle, wisely also endowed the great detective with great strength and physical prowess. Holmes’s fighting skills are mentioned in several adventures, including “The Adventure of Empty House,” where Holmes explains to Watson that it was his knowledge of “baritsu, the Japanese system of wrestling,” that enabled him to triumph over Moriarty in their famous confrontation at the Reichenbach Falls.

In our series, The Sherlock Holmes and Lucy James Mysteries, Sherlock has a hitherto-unknown daughter, Lucy. We first meet Lucy when she is twenty-one, and she has most definitely inherited her father’s intellect and passion for crime-solving. But in developing her character, we ran into a problem: could Lucy face the physical danger inherent in grappling with murderers and capturing thieves and yet emerge as triumphant as her father? After all, we thought, Victorian ladies didn’t train in martial arts and boxing.

As we dug into historical sources on the subject, we were surprised to find that there was a tradition of female prize-fighters going back all the way to the 1700’s. In 1900, a circus strong woman from Lancashire named Polly Burns was named the Women’s World Boxing Champion. In the early days of the sport, female boxers were very much seen as oddities, unusual enough to draw crowds to watch what was considered more a circus show than an athletic feat. But the turn of the century also saw the rise of the women’s self-defense movement, which helped to bring female athleticism far more into the mainstream culture.

The latter half of the 19th century was a time of great social change, when industrialization and urbanization encouraged more and more women to venture out into a world that had been largely the domain of men. Whether to attend school, commute to work, or even to attend the new entertainment venues like music halls and moving picture shows, respectable women began to ride street cars and walk the city streets of London and elsewhere. But their increased freedoms came at a cost. Men known by the slang turn of “mashers” harassed them or made unwanted sexual advances, and violent attacks began to escalate. Laws were soon enacted against harassment and assault, both only hazily defined terms until that point. But laws require effective enforcement, and, just as in our day, too many Victorian women found that they could not rely on the legal system or the police for protection. Many began to take steps to protect themselves.

A woman’s chief weapon, as the female self-defense movement began to gain traction, was the hat pin. These long (up to 6 inches), frequently jeweled pins were used to secure the elaborate hats of the day to a woman’s hair, but they could also be wielded with dangerous purpose in the event that a woman was attacked or threatened by a “masher.” In 1912, a hatpin was even used to foil an attempted robbery. Elizabeth Foley, an 18-year-old bank employee, was walking home with a male colleague who carried the entire payroll for the bank staff. They were attacked by a robber who knocked the male colleague down. But Elizabeth, undaunted, reached for her hatpin and jabbed at the robber’s face. The attacker ran away.

Around this time, the women’s suffrage movement was also gaining momentum, and confrontations with police and male hecklers who attended the suffragette’s rallies were becoming increasingly violent. Frustrated that years of more ladylike campaigning had failed to gain them the right to vote, the WSPU, or Women’s Social and Political Union, began a campaign of civil disobedience, using sticks and dog-whips against the police, and hammers against the glass windows of their opponents. Not surprisingly, these tactics in turn led to increasing police brutality. Women who assembled at rallies or marches were arrested, beaten, and imprisoned, where they faced more beatings. If they went on hunger strikes, they were held down by guards and force-fed through rubber tubes. Sylvia Pankhurst, daughter of the WSPU leader Emmeline Pankhurst, advised her followers not to come to meetings without sticks, and to “learn jiu jitsu.”

One of the suffragettes, named Edith Margaret Garrud, rose to meet the need for self-defense instruction. Though only 4 feet 11 inches in height, she formed the “Suffragettes Self-Defense Club” in 1908 to train members in a combination of jiu jitsu, cane fighting, and French kickboxing that she had learned from its inventor, Edward William Barton-Wright (who named it ‘Bartitsu’ after himself and which Doyle unaccountably misspelled as ‘baritsu’).

Edith popularized self-defense for women through demonstrations all around London. She taught classes in her studio and even made a short film to show how martial arts could be used to fend off an attacker. She trained the Bodyguard, a group of some thirty women who served as protectors for Mrs. Pankhurst. Famous for hiding wooden clubs in their dresses, the Bodyguard fought a number of battles with police officers who were trying to arrest their leader, and also resorted to tricks like employing decoys who distracted the police and enabled Mrs. Pankhurst to escape. Other suffragettes fleeing the police frequently took shelter in Edith’s Piccadilly studio, where investigating officers would find them innocently taking part in group exercise classes.

In 1965, Godfrey Winn of Woman magazine interviewed Edith for her 94th birthday. In the interview, she recalled a confrontation she’d had with one policeman during a demonstration outside of Parliament.

“Now then, move on, you can’t start causing an obstruction here,” the policeman said.

“Excuse me, it is you who are making an obstruction,” Edith answered.

Then she flung the man over her shoulder.

We are certain that Lucy James would have approved.

For those wishing to learn more about the women’s self- defense movement and the woman’s suffrage movement, we can recommend: Femininity, Crime and Self-Defense in Victorian Literature and Society, by Emelyne Godfrey; and Her Own Hero: The Origins of the Women’s Self-Defense Movement, by Wendy L. Rouse.

For those wishing to learn more about Lucy James, the authors happily recommend:  https://SherlockandLucy.com

CHARLES VELEY has loved Sherlock Holmes since boyhood. As a father, he read the entire canon to his then-ten-year-old daughter at evening story time. Now this very same daughter, grown up to become acclaimed historical novelist ANNA ELLIOTT (the Twilight of Avalon trilogy; The Pride & Prejudice Chronicles), has worked with him to develop critically acclaimed adventures in The Sherlock Holmes and Lucy James Mystery Series! Following the release of The Last Moriarty (2015) and The Wilhelm Conspiracy (2016) – books #1 and #2 in the Sherlock & Lucy series, penned solely by Veley – Veley and Elliott’s collaboration has since brought readers seven full-length novels, three novellas, as well as seven short stories. In May 2020, the series expands to include a new short story, Kidnapped at the Tower (Book #18). 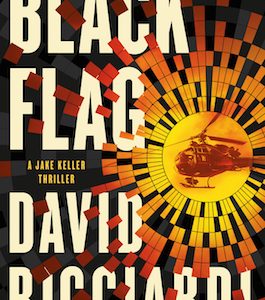 It was a bad week for peace on earth. Born the scion of a Greek shipping dynasty, the young man was said to have seawater...
© LitHub
Back to top