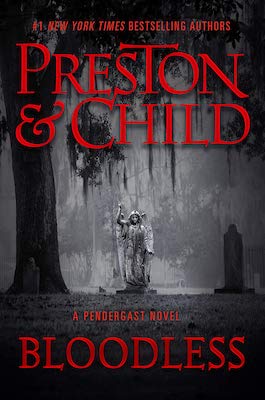 The following is an exclusive excerpt from Bloodless, by Lincoln Child and Douglas Preston. Agent Pendergast is back, and this time, he's headed to Savannah, Georgia, where, on the anniversary of the D.B. Cooper heist, bodies are found scattered around the city, without any blood left in their bodies.

They landed about forty-five minutes later at a remote section of Hunter Army Airfield. No sooner had Coldmoon angrily yanked his backpack out of the rear of the helicopter’s cabin than he heard the sound of a second chopper, approaching quickly. A minute later,  it appeared in the  sky.  It was a Bell 429,  government  issue  by  the look of its tail markings, and it in fact appeared identical to the one their superior, ADC Pickett, had arrived at their  private island in earlier in the day. Coldmoon scoffed. Why should he be surprised?

At almost the same time, as if choreographed, an Escalade with windows tinted almost as black as its body pulled up nearby, stopped, and then waited, idling, engine on.

Coldmoon looked at Pendergast, who was removing his and Constance’s luggage from the rear compartment of the chopper. Earlier, Pendergast had  made  it  clear  that  he  was  eager—to  put it mildly—to get back to New York.  But he seemed to be taking this development in  stride. More  than  that—he  wasn’t  objecting at all.

Coldmoon turned to him. “You knew about this, didn’t you?”

“I assure you I did not,” Pendergast replied over the prop wash.

“Then why the hell are you acting like we’re stopping for a picnic? I thought you wanted to get home.”

“I very much wish to return to New York.” He began walking with the bags toward the waiting SUV.

Coldmoon followed him. “Then what the—?”

“My dear Armstrong.” Coldmoon hated it when Pendergast began one of his little pronouncements like that. “I fail to see what this display of agitation will accomplish. Pickett knew our wishes. There must be a good reason for him to have  ignored them. Perhaps it    has something to do with that Georgian senator who carries a lot of weight with the FBI. Yes . . . I suspect we’ve been diverted because of a case offering potential bad publicity.”

Coldmoon looked at him. “If I didn’t know better, I’d say you sound intrigued.”

“I am intrigued.” Pendergast looked around the airfield, silver-blue eyes glinting in the open air. “Savannah  is  lovely.  Have  you  ever been there?”

“No, and I have no interest in going.”

“It’s a charming city, full of beautiful old mansions, cruel histories, and numerous ghosts. A true gem of the South. It rather reminds me of our old family plantation house, Penumbra—as it once was.”

Even as Pendergast was speaking, Coldmoon turned away, muttering a long and anatomically specific Lakota curse. He honestly couldn’t decide who was worse—Pickett or Pendergast. It figured the guy once had a plantation.

Now the passenger door of the Bell slid open and the trim figure of Pickett came striding toward them. “I’m very sorry about this little detour,” he said before Coldmoon could object. He waved in the direction of the SUV. “If you  would all please get in, I’ll explain as  we drive.”

“Drive where?” asked Coldmoon. But Pickett was already talking to the driver. There was one furious whine from behind, then another; turning, Coldmoon saw their helicopter and Pickett’s taking off in sequence, backwash blowing over them. The choppers rose, noses drooping like ungainly buzzards. He was half tempted to run toward them and cling to the skids before they were completely out of reach. In a silent fury,  he tossed his backpack in the rear of the SUV and  got in, sitting in the rearmost seat. Constance slipped in next to him. Pendergast took a seat in the middle along with Pickett. The driver put the Escalade in gear and stepped hard on the accelerator. Military hangars and warehouses swept past, and then they were on I-516, heading north.

Pickett closed all the windows and asked the driver to turn up the A/C, then cleared his throat.

“I want to assure you this was a last-minute development,” he said. “I didn’t know in advance, and I promise my visit wasn’t an attempt to waylay you. The fact is, a problem has developed here that demands immediate attention. It’s a cooperative investigation between the Bureau and the local authorities.”

“Surely you have abundant resources here in Georgia already,” Pendergast said, “that are capable of supplying that attention.”

Pickett winced. “Let’s just say this case is particularly suited to your strengths. It’s a fast-breaking situation and we need to get on top of it and show progress right away.”

“I understand. And how is Senator Drayton these days?” Pendergast asked.

“I’m going to pretend I didn’t hear that,” said Pickett.

“But he is an acquaintance of yours, is he not?”

“You have no idea,” Pickett replied with a wintry smile. There was a brief but nevertheless uncomfortable pause. “I’m asking you to take a look, that’s all.”

“By all means,” said Pendergast. “Although I believe those were the precise words you used a few weeks ago, when you asked me to fly  to Sanibel.”

Coldmoon saw his chance to jump in. “And what does this have to do with me? I’m due to report to the Denver office.”

“But, sir, my arrival has been delayed once already. If you say this is Pendergast’s forte, great, but I really need to get—”

“Agent Coldmoon?” Pickett said. His voice was unnaturally quiet, but the subzero tone of it shut Coldmoon up. “This is the Federal Bureau of Investigation, not a country club where you get to dictate your tee times.”

In the silence that followed, the SUV took the interchange onto I-16 toward downtown Savannah. Pickett opened his briefcase and removed a slim folder.

“Three days ago,” he said, “the body of a local hotel manager was found washed up on the bank of the Wilmington River. His body was completely drained of blood.”

Pickett looked up at her with an expression of surprise. “A mortician couldn’t have done a better job. Initially, the local authorities thought it to be the work of a madman or a cult—or possibly a vengeance killing by a gang. But just this morning, another body was found in a courtyard of a house on Abercorn Street. It, too, was drained of every last drop of blood.” He glanced at his watch. “The reason for the rush is they’ve been holding the new crime scene for us to examine.”

Coldmoon glanced over at Pendergast. As usual, the man’s face gave nothing away—except, possibly, an unnatural sparkle in his eyes. The SUV had left the freeway, and they were now driving down a narrow lane named Gaston Street. Creepy brick houses lined both sides, and the road was so bumpy it felt cobbled—perhaps it was cobbled. They passed a park on the right, dense with massive old trees draped so heavily with Spanish moss they appeared to be dripping. It was like something out of a horror movie. Coldmoon had grown heartily sick of Florida: the heat, the humidity, the crowds, the southernness of it all. But this—this spooky city with its gnarled trees and crooked houses— this was even worse.

Why wasn’t Pendergast objecting? After all, he was the senior agent. A saying his Lakota grandfather was fond of came into his mind: Beware the dog that does not bark, and the man who does not talk.

“Unci Maka, Grandmother Earth, give me strength,” he murmured to himself as the Escalade drove farther and farther into the heart of what seemed to him a malign and alien town. 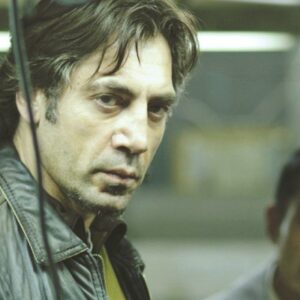 A Better Life: 10 Crime Films About Unauthorized Immigrants I’m going to warn you right now. If you’re Stephen Miller or someone who agrees with that kind of hardline, nativist...
© LitHub
Back to top