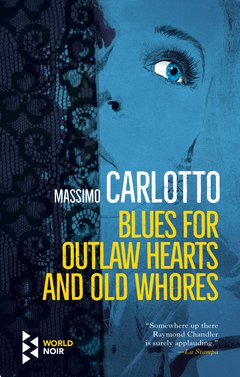 The following is an exclusive excerpt from Blues for Outlaw Hearts and Old Whores, by Massimo Carlotto. Originally published in Italy in 2017, and translated by Will Schutt, this new installment of the “Alligator” series begins when ex-con and PI Marco “the Alligator” Buratti falls into a trap laid by his nemesis. He and his partners, Max the Memory and Beniamino Rossini, are blackmailed and framed as they begin to investigate what is afoot—and they don’t have long to untangle the knots fettering them before they are ensnared for good.

Max reappeared a half hour later wearing a sponge robe  and cradling a fruit-and-veggie smoothie. He took the first sip like a kid being spoon-fed cod liver oil.

Rossini and I looked at each other and burst out laughing. “How about a quick drink in the square then fish at Punta

A look of sheer relief materialized on Max’s face. “I’ll go get changed.”

The following morning I woke up early. After a smoke and coffee I calmly prepared my shaving cream. I needed to collect my thoughts one last time before meeting Dottoressa Marino. It was snowing in Central and Southern Italy, and under the snow the earth was rumbling. As usual, an emergency brought out the best and worst of Italy. Fortunately the sun shone on Padua, despite the freezing temperatures. On the street I stopped into a store advertising unbeatable discounts to buy

something heavier than my old jacket.

“Eskimos are back in style,” confided the young clerk, as if she were sharing a secret. After sizing me up and tallying my age, she figured I was a remnant of the counterculture era.

I shook my head. I wasn’t all that nostalgic. I eyeballed a simple blue parka with particularly thick lining. “I’ll take that one,” I said, and headed for the register.

I parked a block from the café. On my way over I passed a black sedan, fresh from the car wash. The man in the driver’s seat was talking on his cell phone. He was Marino’s driver, clearly. I’d find the others waiting for me in the warmth of the café.

The moment I walked in, the owner nodded toward a table in the back where the Dottoressa was sitting with Inspector Campagna and another cop, younger, who stood up and walked over to me. Wholesome-looking, except for his weasely eyes.

“You know the drill,” he whispered in his thick Calabrian accent.

I raised my arms and spread my legs.

“Everybody in the neighborhood’s already pegged you for cops.”

“Don’t be cute,” grumbled the agent, discreetly patting my sides. “No need to put on a show.”

“Everybody in the neighborhood’s already pegged you for cops.”

Angela Marino sighed. “Leave him be, Sergeant Marmorato. Buratti doesn’t pack a firearm in public. He doesn’t have the balls.”

She kept her eyes on me as I sat down. “Unlike Beniamino Rossini, who wears a bracelet for every man he’s killed,” she went on. “It’ll never be too late to lock him up for life.”

She had a pleasant voice, which made it all the more difficult to swallow her bullshit. I looked at Campagna, who was inconspicuously shaking his head, warning me not to react. I didn’t intend to, not in the slightest. It was my second time meeting that hyena, and I knew she was doing everything in her power to provoke me in order to remind me who was in charge.

She took a sip of water. “Nice of you to show up. We were beginning to run out of patience,” she said. “I’ve earmarked three kilos of coke for you and your friends. For me to plant where I want, when I want. You know how many years you get for that? At least fifteen with my recommendation.”

“We were looking for Pellegrini,” I interrupted.

“I know. He told me. He thinks your objective is to elimi- nate him.”

Well look at that, I thought, pretty Angela has a direct line to Handsome Giorgio.

I feigned indignation. “Pellegrini’s wrong. All we want is to find out who could have it out for him so bad as to mur- der Martina and Gemma so brutally. Because there’s a long list of people who have a score to settle with the guy you’re protecting.”

“Bullshit. You wanted to eliminate him and slink off.”

I tried changing the subject. “Did Pellegrini inform you he killed Lotte Schlegel, his hostess in Bern?”

“Giorgio had nothing to do with that. It was probably the people who took out the wife and friend.”

“Maybe it was you,” she shot back.

I put up my arms. “What? Threatening to throw us in jail for trafficking isn’t enough for you?”

The woman smiled. “I can top that.”

I pretended to surrender. “What do we have to do?” “Investigate the death of Martina and Gemma.” “Why us? Isn’t that Homicide’s job?”

“With your connections, I’m sure you and your friends have a better shot at uncovering the killers.”

What she’d said was half true. I pressed on. “You didn’t answer my first question.”

The cop stood up, and Marmorato mimicked her. “From now on we won’t tolerate anymore funny stuff,” she said. There was venom in her voice. “Inspector Campagna will provide you with the pertinent information.” She began walking away but turned around after a few steps. “I tapped my people at Interpol to get a clearer picture of your criminal contacts in Slovenia and Croatia. The local authorities cooperated. In the future, it won’t be so easy to rely on your cohorts and hide- outs,” she added smugly. “Running isn’t a viable option anymore, Buratti. You should think about turning on Rossini, once the case is closed, in exchange for immunity. For you and that derelict Max the Memory.”

“Three kilos of coke are more than enough to get what you want. You don’t need me.”

“You’re capable of nailing Rossini for every bracelet on his wrist.”

“Oh, sure,” she replied. “You all act tough at  first.  But when you’re facing life in jail, you’ll turn on anybody.”

“That’s your goal is it, nail Rossini?”

“Not my main goal, obviously. But why not take advantage of the situation? Giorgio testifies to the few murders he wit- nessed, and you testify to the rest.”

Suddenly I got it. “Sending Beniamino to jail is Pellegrini’s idea, am I right?”

“He put it out there during negotiations. Involving you gives us the added opportunity to shut your gang down for good.”

“We’re not a gang,” I answered, indignant.

“An opinion that’ll definitely pique the interest of the High Court,” she trilled, exchanging a playful look with Sergeant Marmorato.

“There’s one thing I don’t get, Dottoressa.”

“You’re presuming we’ll accept being blackmailed for some bogus crime. I mean, in the end you’ll do everything in your power to screw us over no matter what. Tell me, what’s in it for us?”

“Wake up, Buratti. This is a contest to see who’s most willing to peddle his ass,” she snapped, fed up, as if she was talk- ing to an idiot. “Prove you’re willing to sacrifice everything in the name of justice and there’s a chance you can save yourself.”

She turned heel, and Marmorato followed. The Dottoressa had made herself clear.

I snatched Campagna’s wrist. “What, none of your usual repartee to lighten the mood while that bitch measures our coffins?” I asked. I was livid. 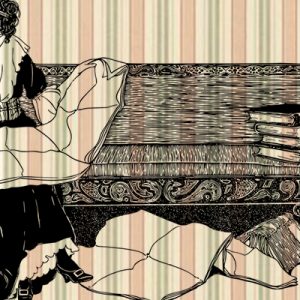 A Crime Reader's Antidote to Valentine's Day Like most Hallmark holidays, Valentine’s Day is, on the surface, a holiday for selling goods, and just below the surface,...
© LitHub
Back to top