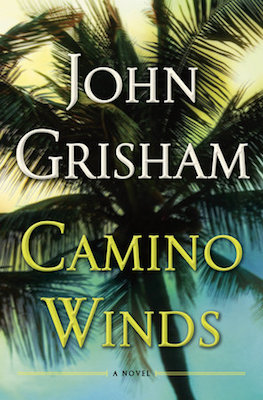 The following is an exclusive excerpt from Camino Winds, by John Grisham. When thriller author Nelson Kerr is found dead on Camino Island after a devastating hurricane, local bookstore owner Bruce Cable is suspicious of foul play more than foul weather. Especially when Bruce realizes that the stories in Nelson's bestsellers might not be so fictional, after all...

Leo spun to life in late July in the restless waters of the far eastern Atlantic, about two hundred miles west of Cape Verde. He was soon spotted from space, properly named, and classified as a mere tropical depression. Within hours he had been upgraded to a tropical storm.

For a month, strong dry winds had swept across the Sahara and collided with the moist fronts along the equator, creating swirling masses that moved westward as if searching for land. When Leo began his journey, there were three named storms ahead of him, all in a menacing row that threatened the Caribbean. All three would eventually follow their expected routes and bring heavy rains to the islands but nothing more.

From the beginning, though, it was apparent that Leo would go where no one predicted. He was far more erratic, and deadly. When he finally petered out from exhaustion over the Midwest, he was blamed for five billion in property damages and thirty-five deaths.

But before that he wasted no time with his classifications, advancing swiftly from tropical depression to tropical storm to a full-blown hurricane. At Category 3, with winds of 120 miles per hour, he hit the Turks and Caicos head-on and blew away several hundred homes, killing ten. He skirted low beneath Crooked Island, took a slight left, and aimed for Cuba before stalling south of Andros. His eye weakened as he lost steam and limped across Cuba, once again as a lowly depression with plenty of rain but unimpressive winds. He turned south in time to flood Jamaica and the Caymans, then, in a startling twelve-hour period, he reorganized with a perfect eye and turned north toward the warm and inviting waters of the Gulf of Mexico. His trackers drew a line straight at Biloxi, the usual target, but by then they knew better than to make predictions. Leo seemed to have a mind of his own and no use for their models.

Once again he rapidly grew in size and speed, and in less than two days had his own news special on cable, and Vegas was posting odds on the landing site. Dozens of giddy camera crews raced into harm’s way. Warnings were posted from Galveston to Pensacola. Oil companies scurried to extract ten thousand rig workers from the Gulf, and, as always, jacked up their prices just for the hell of it. Evacuation plans in five states were activated. Governors held press conferences. Fleets of boats and airplanes scrambled to reposition inland. As a Category 4, and veering east and west along a steady northbound trek, Leo seemed destined for a historic and ugly landfall.

And then he stalled again. Three hundred miles south of Mobile, he faked to his left, began a slow turn to the east, and weakened considerably. For two days he chugged along with Tampa in his sights, then suddenly came to life again as a Category 1. For a change he maintained a straight course and his eye passed over St. Petersburg with winds at a hundred miles per hour. Flooding was heavy, electricity was knocked out, flimsier buildings were flattened, but there were no fatalities. He then followed Interstate 4 and dumped ten inches of rain on Orlando and eight on Daytona Beach before leaving land as yet another tropical depression.

The weary forecasters said farewell as he limped into the Atlantic. Their models ran him out to sea where he would do little more than frighten some cargo ships.

However, Leo had other plans. Two hundred miles due east of St. Augustine, he turned north and picked up steam as his center spun together tightly for the third time. The models were reshuffled and new warnings were issued. For forty-eight hours he moved steadily along, gaining strength as he eyed the coast as if selecting his next target.

At Bay Books in the town of Santa Rosa on Camino Island, the chatter among the clerks and customers was of nothing but the storm. Indeed, across the island, as well as from Jacksonville to the south and Savannah to the north, everyone was watching Leo and talking about him nonstop. By now most folks were well informed and could say with authority that no Florida beach north of Daytona had taken a direct hit in decades. There had been plenty of glancing blows as the hurricanes hurried north toward the Carolinas. One theory was that the Gulf Stream sixty miles out acted as a barrier to protect the Florida beaches and it would do so again with pesky Leo.

Another theory was that the luck had run out and it was time for the Big One. The models were a hot topic. The hurricane center in Miami was now plotting a trajectory that sent Leo farther out to sea without landfall. But the Europeans had him coming ashore south of Savannah as a Category 4, with massive flooding in the low country. If Leo had proved anything, though, it was that he cared nothing for the models.

There wasn’t a cloud in the sky, and Bruce bought into the legend that Camino Island was immune to dangerous hurricanes.

Bruce Cable, the owner of Bay Books, kept one eye on the Weather Channel while he hustled customers and chided his staff to get about their business. There wasn’t a cloud in the sky, and Bruce bought into the legend that Camino Island was immune to dangerous hurricanes. He’d been there for twenty-four years and had not seen a destructive storm. His store hosted at least four readings a week, and a major appearance was on for tomorrow night. Surely Leo would not disrupt the pleasant homecoming Bruce had planned for one of his favorite authors.

Mercer Mann was ending a two-month summer tour that had been wildly successful. Her second novel, Tessa, was the talk of the trade and currently in the top ten on all the best-seller lists. Its reviews were glowing and it was selling faster than anyone had expected. Labeled literary fiction, as opposed to one of the more popular genres, it had seemed destined for the lower rungs of the lists, if it made it at all. Its publisher, along with its author, had dreamed of selling thirty thousand in hardcover and e-book combined, but the novel was already beyond that.

Mercer had deep roots on the island, having summered there as a girl with her grandmother, Tessa, the inspiration for the novel. Three years earlier she had spent a month on the beach in the family cottage and managed to entangle herself in some local mischief. She had also had a quick fling with Bruce, just another in his long line of trysts.

But Bruce wasn’t thinking about another fling, or at least he was trying to convince himself he wasn’t. He was busy running the store and drumming up a crowd for Mercer’s big event. Bay Books was a powerhouse on the national bookstore circuit because Bruce could always pull in a crowd and move the inventory. The New York publishers clamored to get their writers to the island, and many of them were young ladies on the road and looking for a good time. Bruce loved writers and he wined and dined them, promoted their books, and partied with them.

Mercer had been down that road and wasn’t going back, primarily because she was being escorted on her summer tour by a new boyfriend. Bruce didn’t care. He was just delighted she was on the island and riding high with a superb new novel. He had read the galleys six months earlier and had been promoting it ever since. As usual, when he loved a book, he had sent dozens of handwritten notes to friends and customers touting Tessa. He had called booksellers across the country and encouraged them to stock up. He had chatted with Mercer for hours on the phone and advised her on where to tour, what stores to avoid, which reviewers to ignore, and which journalists to spend time with. He had even passed along some unsolicited editorial comments, some of which she appreciated, some she ignored.

Tessa was her breakout novel, her golden moment to establish a career that Bruce had believed in since her first book, which had been largely neglected. She had never stopped adoring him, their little fling aside, along with a rather serious breach of confidence that surrounded it, for which he had forgiven her. Bruce was a lovable though roguish character and an undeniable force in the brutal world of bookselling.

As a bonus, you can watch John Grisham read Chapter 1 of Camino Winds right here.

From the book CAMINO WINDS by John Grisham

Published by arrangement with Doubleday, an imprint of The Knopf Doubleday Publishing Group, a division of Penguin Random House LLC

Tokyo Crime Novels: The Storms Beneath the Calm Surface 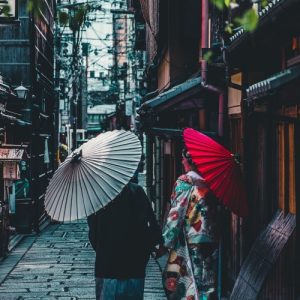 Tokyo Crime Novels: The Storms Beneath the Calm Surface Tokyo’s a big city that has a long and fantastic tradition of crime writing, so this Crime and the City is a little longer...
© LitHub
Back to top