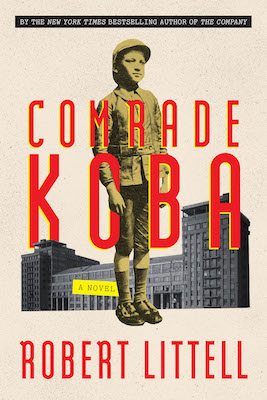 The following is an exclusive excerpt from Comrade Koba, by Robert Littell. After his father dies suddenly and his mother is arrested in Stalin's persecution of Jewish doctors, Leon Rozental is hiding from the NKVD when he meets Koba, an elderly, high-ranking apparatchik with a connection to Stalin, himself.

Here goes nothing: It’s me, Leon. The Leon who got to be friends with this old man in the last weeks of his life before he met his Maker (assuming his Maker, given the old man’s awful iodine breath, was willing to meet him). The Leon who was on the listening end of confabulations with the old man, my questions fish-hooking his answers, which I scribbled on the pages of a lined notebook as soon as I got back home. The Leon who hung out with him in his apartment when nobody else could get to within shouting distance except for the comrades he called kittens, them and the household, who skimmed the marble floors of the palace in bedroom slippers so as not to wake him because it was supposed, at his age—not to mention what he might have had on his conscience being that he helped run the country—he didn’t sleep all that much, which turned out to be more or less factual.

I suppose I need to start at the start, the only problem being I’m not sure I can identify the start. Maybe, hey, maybe it was my dad dying of radiation poisoning. You’ll probably recognize his name—David Rozental?—he was famous, here in Russia at least. He was the nuclear physicist who came up with the quantum field model of the weak nuclear force (being my father’s son, I actually understand it), he was the one who convinced the general secretary it was theoretically possible to make an atomic bomb (I think that’s when they gave him the Pobeda with the golf-club gear shift), later he was in charge of the super-secret Lab- oratory No. 2 in the Academy of Sciences and organized Russia’s first chain reaction. It wasn’t cooled by heavy water because Russia didn’t have heavy water—they used graphite to slow down the chain. Naturally it didn’t slow down and overheated. Everyone bolted except for my dad, who tried to save the precious uranium in the rods because Russia didn’t have all that much uranium neither. When my dad didn’t come home from work that day my mother, thinking he might have been arrested—hoping he had been arrested because the alternative was too awful—made frantic phone calls until she fell on someone at the Laboratory who told her what happened and made her swear not to say who told her. I heard my mom utter a swear word as she hung down the phone and break into hysterical sobs. Seeing her cry, naturally I cried too, though at the time I wasn’t sure what I was crying about. That was four years ago, in 1949; I was six going on six and a half. David Rozental was awarded the Order of Lenin for his work on “First Lightning,” which was the code name of our first Soviet atomic bomb. My mom took me with her to a secret ceremony in a stuffy hotel room filled with papier-mâché funeral flowers and stone-faced men who looked as if they were suffering from terminal heartburn. They gave me American chewing gum and a real NKVD badge. One of them, a little guy with thick heels on his shoes to make him taller and a monocle glued to his left eye, stepped up to my mother and planted a noisy kiss on both of her ashy cheeks, then permitted the back of his right hand to graze her left breast as he pinned this medal on her dress. (Hey, at six and a half I already knew about the birds and the bees.) It was in this hotel room I learned the word posthumously. Okay, let’s say, for argument’s sake, that was the start.

Or maybe . . . on second thought, maybe it started with my mother’s arrest. Now that I think of it, that seems like a smarter place to start if for no other reason than it’s fresher in my brain.

So I’ll start with this major event in my life: my mom’s arrest.

Thanks to my father being this important nuclear physicist, thanks to my mother being this important heart doctor in the Kremlin hospital, we’d been assigned an apartment in the House on the Embankment, on the third floor no less, where the politburo and CheKist bigwigs lived. The hero who led the storming of the Winter Palace in the glorious Bolshevik Revolution, Nikolai something or other, lived in apartment 280. I never actually saw him, my friend Isabeau did and said he had a long white beard. There was also this famous explorer, Ilya something or other, who walked the penguin he brought back from the Arctic on a leash. Him I’ve seen with my own eyes. The penguin was cute, the less said about Ilya something or other the better. The esteemed general secretary’s cousins, the Svanidzes and the Redens, lived down the hall. I went to school with their kids—most of them were pills. The esteemed general secretary’s own daughter, Svetlana, lived next to the elevator in apartment 179 with her newest husband. My chum Zinaida babysat their baby girl, which is how we heard about Svetlana having one or two husbands before the one she lived with now. The one she lived with now was named Yuri. Some of the kids whispered he was the son of A. Zhdanov, esteemed Comrade Stalin’s minister in charge of weeding out root- less cosmopolitans, which us kids took to be some kind of contaminated city shrub. Once I rode down in the elevator with this Yuri guy, he stared off into space even after I said hello. I figured, like, he must have had a lot on his mind if he couldn’t say hello back to a kid who wasn’t supposed to know who he was.

If I climbed onto a chair, from my bedroom window of our apartment I could see the Kremlin walls, behind which the general secretary himself lived, reflected in the Moscow River flowing between the Kremlin and me on my chair looking out the window. The House on the Embankment, which was this gigantic building built long before I was born, had an awful lot of empty apartments, the doors of which were sealed with duct tape with the initials NKVD on them. I don’t know why so many apartments were empty, or why even if they were empty the doors needed to be sealed with duct tape. My father, when he was still alive, would mutter something about not getting in the way of the stampede of history when I asked him to explain the duct tape. My mother would look away and scold me for asking foolish questions, the answers to which I was too young to under- stand. What I was too young to understand was why they didn’t answer my question. I understand now. But that’s a whole other story.

Weekdays I went to School No. 175, which is where all the kids living in the House went, which is how come I got to ride in a shiny American Packard driven by an actual chauffeur. There were always three or four Packards parked outside in the morning with their motors running, and the Soviet admiral moonlighting as a doorman waved me and the other kids to the one that would leave next. The House had a cinema in the minus-one basement. My best friend Isabeau said they showed American films captured by our glorious Red Army during the Great Patriotic War. I don’t know how she could know that, being as us kids weren’t allowed into the basement cinema. On the floor below the cinema there’s a gym, a heated swimming pool, a basketball court, a laundry, and best of all a grocery store where you can buy things like Italian pasta and Cuban cigars and Scottish whisky, which was something my father especially liked. For some reason the doors to the gym and the swimming pool and the basketball court were always padlocked. There’s also a cafeteria that us kids were allowed into even without parents. When my parents worked late, then after my dad died when my mom had the night shift at the Kremlin hospital, I would pick up a tin tray and point to what I wanted in the glass case, and the cook, an Uzbek with a ski-slope nose and slanty eyes, would add vegetables even if I didn’t point to them and I would count out the fifteen rubles fifty to the cash register lady with the glass eye that stared off in one direction while her good eye looked disapprovingly at me. If Isabeau was there—both of her parents had been arrested, her dad executed for being a British spy even though he didn’t speak British, her mother taken off to some jail or other, their apartment sealed with NKVD duct tape, but Isabeau, like me after my mother’s arrest, was hiding out in our secret rooms and using the secret passageways between apartments that had been built so the House’s original tenants could circulate without being seen—we would always sit at the same table, Isabeau next to me, close. She was seven and a half months older than me but she didn’t have breasts yet, otherwise I would have asked if I could touch one. The people who ran the basement cafeteria never seemed to have gotten word who was and who wasn’t arrested—so as long as we could pay for the food they let us eat there.

My parents didn’t subscribe to Pravda. Like, my guess is that they were so important they didn’t need to, but there was always a copy of today’s paper spread-eagled in the glass case next to the admiral’s pew inside the House’s main door, and us kids would read the headlines while we waited for the next Packard. Which is how I found out about this doctor’s plot in the Kremlin hospital. 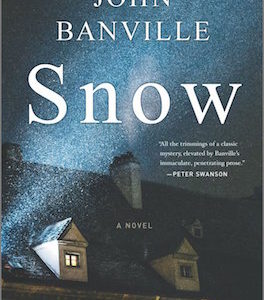 Snow "The body is in the library," Colonel Osborne said. “Come this way.” Detective Inspector Strafford was accustomed...
© LitHub
Back to top