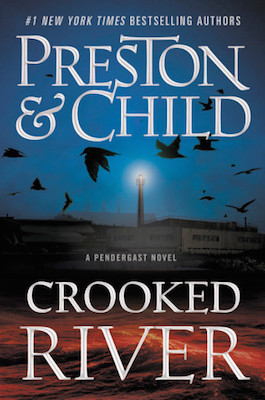 The following is an exclusive excerpt from Crooked River, by Douglas Preston and Lincoln Child. When dozens of shoes wash ashore off the coast of Florida, each containing a severed foot, Agent Pendergast arrives to his most perplexing crime scene yet. Nothing is certain—not even if the victims are still alive.

The tide was coming in, the wind had picked up, and the surf was beating against the shore with a little more energy. A wave broke across Ward’s feet, sending a spiral-shaped pink shell rolling and bouncing over his toes. As he picked it up, another sheller hustled up behind him—bright colors in the shallow water drew them like flies—and peered over Ward’s shoulder, breathing heavily.

“Rose petal?” the man asked excitedly. Ward turned to look at him—maybe fifty, overweight, with a Ron Jon sun visor, cheap sun glasses, and arms sunburned from the elbows down. A tourist, of course, like everyone else around. The locals knew the best times for beachcombing, and Ward rarely saw them.

“No,” said Ward. “Just a cone. Alphabet cone.” His sister, instinctively alerted to a possible Find, came skipping over, and he tossed it to her. She gave it a quick glance, made as if to fling it into the water, then on second thought dropped it into her pail.

The man in the sun visor fell back and Ward walked on, trailing Amanda, the bones of ancient sea creatures crunching beneath his flip- flops. Thoughts of packing up reminded him they’d be home the day after next, which meant resuming his life—finishing his junior year, then starting the grind of tests, essays, and college applications that would inevitably follow. Recently, he’d begun worrying about ending up like his father—working like a dog but somehow never getting ahead, overtaken by younger people with shinier degrees and more marketable skill sets. He didn’t think he could stand that.

Another wave broke over his feet, and he automatically corrected course, veering inland. Fresh shells went tumbling back with the undertow: an auger, a conch, another auger, yet another. He’d already collected enough damn augers to last a lifetime.

Another wave, heavier still, and he looked out to sea. The water was definitely getting rougher. That was probably a good thing: to- morrow was their last full day, and maybe they’d get another storm that would bring in a bonanza like when they’d first arrived.

Just then, his eye caught a flash of green directly ahead. It was a lighter shade than the turquoise water, and it was rolling end over end, receding with the surf. And it was big. A fighting conch? No, the color was wrong. It wasn’t a whelk, either.

In a moment, his jaded attitude evaporated, replaced by a collector’s lust for rarity. He glanced furtively up and down the beach. Neither his sister nor the man in the visor had noticed it. He casually increased his pace. It would be back again on the next wave, or maybe the next.

Then he saw it again, half-submerged, about six feet out from the shore. And this time he realized it was not a shell at all, but a sneaker. A brand-new, light green sneaker. Not quite like any he’d seen before. Even if he couldn’t afford them, he knew from high school that certain sneakers were super collectible. Balenciaga Triple S or Yeezys often sold for three or four hundred dollars, when you could find them in stock. And if you were really lucky, and scored a rare pair like the Air Jordan 11 Blackouts, you could sell them used on eBay for four figures, easy.

For all Amanda’s shelling, the best specimen she found all week might get ten bucks, tops.

One sneaker, just one, and a uniform green. What the hell brand was this? It was rolling in to shore again and he’d know in a moment. The surf swarmed around his ankles with a muted hiss. Deftly, he snagged the shoe from the water. Shit, it was heavy—no doubt waterlogged. Still, it was in great shape. Automatically he turned it over to check the sole, but there was no logo or brand on the rubberized surface.

He sensed more than saw Amanda and the fat guy in the visor approaching him again. He ignored them as he stared at the sole. Maybe it was a prototype. They probably tested them out down here on the beach. People would pay even more for a prototype. Instinctively, his eye traveled back to the line of surf. If the mate was floating nearby, this single discovery just might turn a so-so vacation into something special, even…

Suddenly, his sister screamed. Ward looked at her, frowning. She screamed again, even louder. For some reason, she was staring at the shoe in his hand. Curiously, he glanced down, twisting his wrist to get a better look.

He could now see inside the sneaker. It was filled with something, a pulpy red-pink with a shard of pure white projecting up from the middle. Ward froze, his mind not quite able to process what he was staring at. His father was on his feet and running toward them. From what seemed very far away, Ward could hear the man in the visor cursing, and his sister squealing and backing up, then vomiting into the sand. Abruptly released from his paralysis, Ward dropped the shoe with a convulsive jerk and staggered backward, losing his balance and falling to his knees. But even as he did so, his gaze turned instinctively out to sea, where he could now make out—rolling among the creamy swells—more sneakers, dozens and dozens of them, bobbing lazily, inexorably, toward shore. 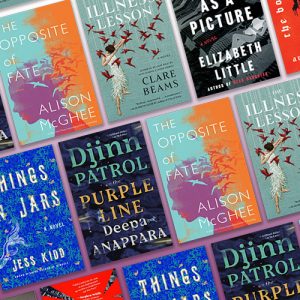 9 Novels You Should Read In February As winter continues (for many—let's not pretend that everyone in this country has a full four seasons), it's time to burrow...
© LitHub
Back to top