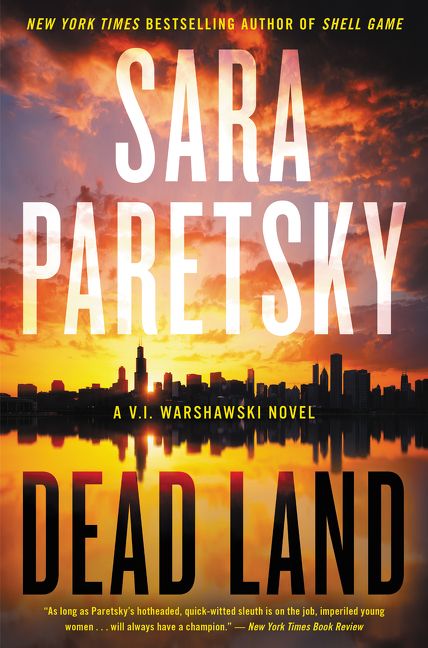 The following is an exclusive excerpt from Dead Land, by Sara Paretsky. Sara Paretsky’s legendary detective returns in her twentieth installment. This time, she’s pulled into a mystery involving sinister land developers when her impulsive goddaughter tries to help a destitute celebrity. But thankfully, Chicago’s toughest PI is on the case.

Someone took the phone from Bernie before I could ask where she was, but from the background sounds before the phone went dead, I guessed she was with police at the crime scene. Peter settled the drinks bill and drove me to Forty-seventh Street.

The Burnham Wildlife Corridor was narrow, but it stretched about two miles, from the parking lot at McCormick Place—Chicago’s big convention center—to the 47th Street viaduct. As we approached the northern edge, we could see bright circles of police flashlights bobbing among the shrubbery. Gapers slowed the exit to a maddening creep. When we finally left the drive, Peter let me out near the parking lot.

The sidewalk was even thicker with gawkers than the drive, but I’d learned the art of breaking through a crowd on the streets of South Chicago. I quickly made it to the front, not bothering to apologize to anyone cursing me after colliding with my elbows.

The entrance to the parking lot was barricaded. I told the officer on duty that I was Bernie Fouchard’s attorney and asked to be taken to her.

The man looked at my credentials with painstaking—and painsgiving—care before grudgingly deciding I was actually an attorney and might be allowed in to see my client. He called someone for permission and pulled the sawhorses apart to let me pass.

Beth Blacksin, from Global’s cable news channel, recognized me and hollered for the name of my client.

All the local TV stations had cameras set up, aimed at the entrance to the lot. The sight of a new body entering the enclosure caused major excitement: three people rushed up with their mikes, wanting my identity. Beth Blacksin, from Global’s cable news channel, recognized me and hollered for the name of my client. When I kept on walking, the other reporters converged on Beth, demanding my name.

Once I was in the main part of the lot, the strobes and arc lights from the police blinded me. I squinted through the glare and finally saw a knot of uniforms at the north end of the lot, where they’d herded some twelve or fifteen people into a makeshift holding pen.

Most of the detainees were older, worn-out people, mostly men, in thread-bare shirts and baggy trousers, some in their winter parkas, since they had no safe place to store them in summertime. A handful of women was segregated from the men onto a couple of benches where they were watched by a trio of women cops. On one bench, wedged between a massive woman in a halter top and long skirt and a younger woman, pencil-thin, whose twitches and rolling eyes betrayed an urgent need for medication, I saw Bernie. She was hunched over, her hands clutching the edge of the bench.

I ran to her, calling her name and she hurled herself into my arms, breaking down into sobs.

One of the women officers put a hand on Bernie’s shoulder, as if to pull her back to the bench.

I gave a shark smile. “I’m her attorney. We’re going to confer in private.”

“I need a lawyer, too!” The large woman next to Bernie surged to her feet, hands on hips. “Why does the white girl get a lawyer and I don’t?”

One of the male detainees staggered over. “You can be my lawyer any time, Sugar.”

“It’s been a long time since I got an acquittal,” I said. “Best find someone with a better track record.”

“Sweet thing like you can’t blind talk a jury?” the man scoffed.

The woman was more belligerent. “Little white girl gets a lawyer and I don’t? What does that say about justice in America?”

“Probably everything,” I agreed.

I started to hand out cards when a female officer jogged over. “What’s going on – oh. You. And your trouble-making niece.”

“Sergeant Pizzello. Yes, it’s me. What happened here and what does it have to do with Bernadine Fouchard? Who is my goddaughter, not my niece.”

The sergeant frowned at us. “We’re still sorting that out. Ernestine,” she added, turning to the angry woman. “I know this lawyer.  You’d be better off with the public defender, but even if you weren’t, you’re not facing any charges. We’re only getting statements and then you’ll be free to go. Unless, of course, someone saw you bending over the victim and removing his wallet or his phone or something.”

Ernestine and the drunk man retreated, both muttering phrases like ‘bitches with too much power.’

“We’ll start with your client, Sugar,” Pizzello flashed her own shark smile. The strobes turned her teeth a ghastly purple-gray. ”Or is she your niece?”

“Goddaughter. But she’s my client all the same. Are the dead man’s wallet and phone missing?”

Pizzello nodded, but looked at Bernie. “Bernadine Fouchard, this is the second time you’ve been involved in an incident in this park. It had better be the last, because even if your lawyer is the hottest investigator in town—meaning, even if she’s better than me, which I doubt—nothing is going to keep your little behind out of my holding cell. So you tell me, and your lawyer-like godmother what the sweet fuck you were doing here tonight?”

Bernie looked at me. “They searched me in a nasty way. Even my breasts.”

“You what?” I shouted at Pizzello.

She bit her lip but said stolidly, “The victim’s phone and wallet were gone. We searched everyone.”

“Out here in the parking lot? Where God and every leering passerby could see you? Even the South Side’s sorriest addict has a right to privacy. I’m going to mention this. Not to the Police Review Board, but to the TV reporters who are hovering around the entrance like crows searching for carrion.”

She didn’t respond, but at least she didn’t try to bluster.

I pulled Bernie away. “Talk directly into my ear. She’s probably recording you. What were you doing here?” 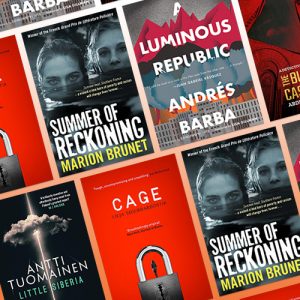 5 International Crime Novels You Should Read This April As we all continue to shelter-in-place, its time to let your mind wander to the far corners of the globe with these new crime...
© LitHub
Back to top