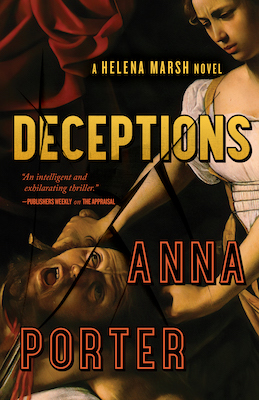 The following is an exclusive excerpt from Deceptions, by Anna Porter. Former Budapest cop Attila Feher only has romance on his mind when he contacts his colleague, art expert Helena Marsh, to ask her help appraising an Artemisia Gentileschi painting, which is either an expert forgery or the masterpiece itself. But when Eastern European gangsters express interest, they decide they should figure out where the painting came from... and why everyone wants it.

The Place de la Cathédrale was packed with tourists. They stood shoulder to shoulder, studying the gargoyles as their guides droned on about history, the quality of the stones, and the mastery of the craftsmen. Helena skirted the periphery, stepping around tables and chairs, children with ice cream cones, waiters with trays, and a range of well-behaved dogs. She continued to the south side of the cathedral, past the lineup for the public toilets, past the cathedral’s museum where there was no lineup, and down Rue de Rohan to the quay where the tour boats waited. She bought her ticket for the Batorama boat scheduled to depart at noon.

Passengers were already waiting, four across and forty deep, chattering in a variety of languages, the children excited about a boat trip, the adults taking photographs of themselves. She took her place behind a group of noisy Swedes.

No one approached her, and no one looked like a lawyer. On the other hand, colourful jackets and T-shirts with ads for Adidas or Nike or with large Chinese lettering could be a clever disguise. But why would he bother?

The ticket-takers made their multilingual announcements, then ushered everyone onto the boat. Helena walked down the aisle between the rows of wooden seats, looking for a man with a briefcase. Instead, he wore a brown fedora, check shirt, chinos, and sandals, and carried a camera. He stood as she approached, indicating the seat next to his own, where he had placed a raincoat. He was shorter than Helena but sturdy, his back curved slightly — perhaps he lifted weights. He motioned to let her pass, but Helena demurred.

“I prefer the outside,” she told him in French.

The man shrugged, moved over, and offered a welcoming smile. “You’re younger than we thought,” he told her under the noise of the loudspeaker advising passengers to stay in their seats during the trip, to turn to their own language on the headphones, to keep their hands inside. “You should wear the headset,” he suggested. “We can talk after the engines start.” He was tanned, fashionably shaved to an even ﬁve o’clock shadow, deep lines down from the mouth, maybe ﬁfty years old, hard to tell in the shadow of his fedora. And that slurry accent. Czech? Thin overlay on local dialect?

She adjusted the headset to cover her ears.

As soon as the boat pulled away from the dock, she heard him tell her to keep looking ahead. “This will take only an hour,” he added. “Please do not draw attention. Observe the buildings on either side. They are very beautiful. Please don’t look at me.”

“Why in hell not?” Helena asked.

“We are on a tour boat. Take the tour. Could you use a scarf or a handkerchief to disguise that you are talking? I am using my hand,” he said, quite unnecessarily because she could see he was shading his mouth with his right hand. Two rings, a gold band on his ring ﬁnger and a larger chunky one with a green stone on his middle ﬁnger. Way too much jewellery for a lawyer.

She took a tissue from her backpack and started to wipe her nose.

“Thank you,” he said. “We think it’s best if it is not noticed that we are together. The painting is likely genuine, but there are a few strange aspects. It could be an early work. Apparently, she didn’t do this sort of painting late in life. But we need to be sure.” His English was very precise.

“Have you already had an expert opinion, or is this your own observation?”

They were passing under a covered bridge, grey stocky buildings on one side. “An expert has looked at it, but he was hired by the husband. He said it was a copy made in the eighteenth century, and since it is such a ﬁne copy, it could be worth two or three thousand euros. We think it’s the real thing and could be worth millions.”

“He said it was a copy of an early work?”

“Yes, he seemed sure of that.”

“Isn’t that the same thing?”

“No.” Her father had commissioned forgeries, never copies. Copies are a mug’s game, he had told her, but to produce a new work that could have been made by the artist himself was phenomenal; to do it with the same paints, the same canvas as the original was genius. He had taken her to the Louvre to see two Monets and a Rubens he had sold them. Their experts had studied the paintings and asked no questions. Monet, Simon had told her, would have been proud to have painted these two. “A copy is made by copying something. A forgery is an original work, painted in the style of the artist, but done by someone else. It’s really a tribute from one artist to another.”

“Has Madame Vaszary researched its history? Is there a record of who had owned it previously? A reason you think it’s a genuine Gentileschi?”

“Monsieur Vaszary bought it from someone who needed the money quickly. We don’t know how much he paid, but we think it was more than he would pay for a simple copy.”

“Where did he say the original is?”

“In the Hermitage. The basement.”

Helena had spent a couple of years in that basement, studying Renaissance art that the Soviet army had collected to celebrate its World War II victories. It had been challenging work, authenticating Titians, a Rembrandt, a Raphael, a Caravaggio, and ﬁfty or more Impressionists. She had reported that several of them were forgeries, but the museum had not concurred with her ﬁndings. She had long suspected that one of the more thuggish Russian oligarchs, Piotr Grigoriev, had been behind the museum’s reluctance. He, after all, had sold them one of the paintings she had failed to authenticate.

“I assume your client wants me to see it?” She had meant to be ironic, but what with the handkerchief, the noise from the engine, and the insistent loudspeaker, her tone would have been lost on the lawyer.

“Today. We checked your credentials. You have a reputation for being tough. And fast,” he said. “You don’t look like your photograph in the journals,” he added.

“Since you invited me here to see a painting, why are we taking this boat tour?”

“. . . passing the old Douane building on the right. It’s where in past centuries you had to deliver your goods for inspection.

. . . Look for the thirteenth-century slaughterhouse bridge coming up . . .”

“Excuse this extra caution, but we wanted you to understand that your visit here has to be absolutely conﬁdential. The husband . . .” He coughed as the Musée Alsacien slipped by on the left. “Details of your appointment are in your hotel.”

She saw a man standing at the railing of the bridge above, looking down at the tour boat, waiting. Then he pulled his grey hat low over his face, tucked something that looked very much like a longbow down the inside of his beige coat, and began to walk toward the French Quarter. Helena jumped over the lawyer and the next two passengers to get to the railing. Using it to steady herself, she leapt off the boat and landed on the embankment. She ran toward the ﬁgure retreating to the other side of the bridge… 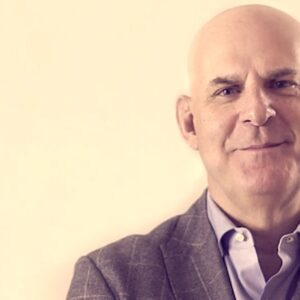 My First Thriller: Harlan Coben Don’t you just want to hate a successful novelist who never took a creative writing class? None. Not one. Not even an English...
© LitHub
Back to top