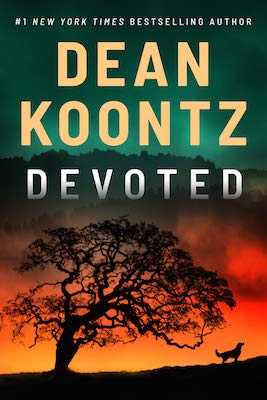 The following is an exclusive excerpt from Devoted, by Dean Koontz. Woody is an eleven-year-old boy who has never spoken a word. But he knows that his father's death in a freak accident was actually the result of an evil force. Kipp the dog knows it too, and he knows he has to find Woody. Because something dark and terrible is brewing, and they have to be able to stop it.

Lake Tahoe was among the deepest and purest lakes in the world, and drinking from the streams that fed it involved no serious risks.

The water was cool and clean.

He paused in his drinking to watch torsional fish, their fins wimpling as they swam through the sun-pierced pools in which the descending stream periodically gathered itself.

As a canine, he was a hunter by nature. But he’d never actually hunted.

Except when Dorothy had played hide the ball and he’d been tasked with finding it. He’d found the ball a thousand times, but he’d never eaten it.

The meadows were full of rabbits nibbling grass in the sun. When they spotted Kipp, most of them either tensed and froze and pretended invisibility or raced away in terror.

A few rabbits regarded him warily, then continued eating as though they perceived his weakness.

Kipp was physically strong, seventy pounds of muscle and bone. He was mentally strong, too.

But emotionally . . . compassion remained at odds with instinct.

Nature’s way was for the sharp of teeth to feed on those whose teeth were blunt, for the strong to rule the weak.

But he was a dog with the high-order intelligence of a human being, neither canine nor human.

Although he was in the form of a dog, he was in spirit both a dog and a human being. This had been done to him before his birth.

Although he was in the form of a dog, he was in spirit both a dog and a human being. This had been done to him before his birth.

He had been as a child to Dorothy. His culture and ethics were hers, were human.

Some human beings could kill their own kind in anger, for gain, and even just for the thrill of it.

Neither Dorothy nor Kipp were that decadent.

Most human beings could kill in self-defense, and so could Kipp, child of Dorothy.

But rabbits were no threat to him. Neither were squirrels or field mice.

He passed through meadows and woodlets alive with lunch and dinner, and his hunger grew.

It would seem that, starving, he could kill anything blunt of teeth to save himself. After all, rabbits and squirrels were neither canine nor human.

They were not his kind. Nature meant for him to have them as he needed. They were prey.

This was where, in his present circumstances, the blessing of human-level intelligence became almost a curse. He knew compassion.

Those are burdensome qualities.

At moments like this, smell became a philosophical issue.

The sense of smell was central to a dog’s life, as much as twenty thousand times greater than that of a human being. His nose had forty-four muscles, as compared to four in the human nose.

His sense of smell alone brought him more information than all five human senses combined. In this case, too much information.

Among the lower animals, every creature found joy in the fact of living. Kipp could smell their abiding joy as pungently as he could detect the odor of their droppings, musk, breath, and warm blood.

Compassion and mercy and pity versus the survival instinct.

Human beings resolved the problem-sort of-by putting distance between themselves and the source of some of their life-sustaining fare by establishing slaughterhouses and the profession of butcher.

Kipp had no credit card to pay a butcher.

This moment in which he found himself was called a “crisis of conscience.”

Being entirely in the form of a dog, and half a dog in spirit, he didn’t drive forward relentlessly toward the boy whom he’d set out to find or toward the satisfaction of his appetite.

He was distracted by a dog’s need to frolic.

A small swarm of butterflies captured his imagination. He didn’t try to bite them, but capered after those bright wonders, marveling at their effortless air dance.

Perhaps a half mile later, a foil balloon, partly deflated but still buoy¬ant with helium, floated over a field he was crossing.

The word HAPPY was clearly printed on it in red.

The second line of letters, crinkled in and out of the deep creases in the material, seemed to spell BIRTHDAY.

He had seen such balloons before. Nevertheless, this one struck him as irresistibly strange because of its dislocation.

The bright, mirrored Mylar drifting across this isolated meadow enchanted him. It seemed to mean something.

Kipp pursued it, leaping to bite at the long red ribbon that trailed from it. His teeth closed on empty air, and in frustration he leaped higher the next time, higher still.

Just as he chastised himself for succumbing too completely to his inner puppy, the balloon proved to have meaning, after all.

He came upon a fluttering bird lying on bare ground. One wing was broken.

In fright, the creature rolled its eyes and worked its beak without making a sound. Terror and pain robbed it of song.

Nothing could be done for the bird. Its fate was to be taken by a hawk or a fox or something else, and eaten alive.

Kipp considered it for a minute.

He thought, I’m sorry, little one.

With one forepaw, he stepped on it, bore down with all his weight, and broke its neck.

When humans went to a theater to see a tragedy, it was a play in which some great person fell from a height, destroyed by fate or a character flaw.

Kipp had watched comedies and tragedies on TV with Dorothy.

A bird could have no character flaw. And yet birds, like all the little animals, had their roles in tragedies every day.

In this beautiful but hard world, fate spared no species.

This bird was plump. There was a satisfaction of flesh under the feathers.

Kipp turned away, leaving the bird untouched. He had no taste for tragedy.

Less than a mile later, an aroma came to him that was familiar and delicious. Hamburgers on a grill.

And not just hamburgers. Also frankfurters.

Drawn by the smells, he raced toward a wall of trees, through an evergreen woods, and out into a campground with a mix of tents and small motor homes.

He had a thousand wiles and stratagems by which to charm them. He would be fed.

In his hunger, he forgot for the moment that not all people were good. If even a hundred of them were kind, there would be one whose every intention was wicked.

Excerpted from Devoted by Dean Koontz with permission from the publisher, Thomas & Mercer. Copyright © 2020 by The Koontz Living Trust. All rights reserved. 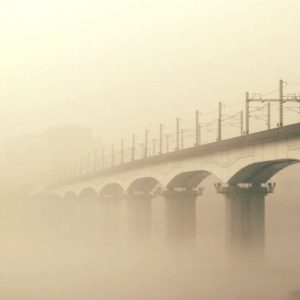 8 Great Novels Where Things Disappear The missing person is a classic mystery trope for a good reason. It immediately sets a story in motion while providing for a variety...
© LitHub
Back to top