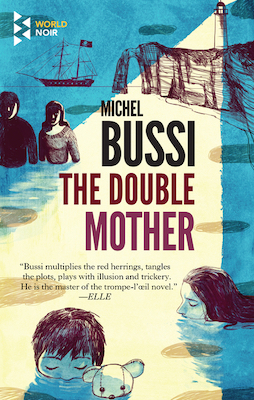 The following is an exclusive excerpt from The Double Mother, by Michael Bussi. Four-year-old Malone Moulin can remember a moment in his life when he was handed over from one woman to another. Even though countless experts assure him that his mother is his real mother, he is not so sure, and begins an investigation of his own.

The telephone rang, waking Captain Marianne Augresse with a start. For a brief instant, her eyes remained fixed on her cold, naked skin, then she removed her arm from the bath where she had been dozing for the past hour and picked up the phone. Her forearm knocked the little tray of toys balanced on the laundry basket and plastic boats, wind-up dolphins and small fluorescent fish scattered over the surface of the water.

She had been hoping it was one of her lieutenants: JB, Papy, or one of the other duty cops at Le Havre police station. She had been waiting for a call since the previous day, when Timo Soler was spotted in the Saint-François quarter, near the pharmacy. She had stationed four men between the Bassin du Commerce and the Bassin du Roi. They had been searching for Timo Soler for nearly a year: nine months and twenty-seven days, to be exact. The hunt had begun on Tuesday 6 January 2015, during the armed robbery in Deauville. The surveillance camera had immortalised the face of Timo Soler just before he vanished on a Münch Mammut 2000, taking with him the 9 mm Luger bullet, lodged, according to the ballistics experts, somewhere between his lung and his shoulder. Marianne had known she wouldn’t get a wink of sleep until the following morning and so had planned only to doze in the bath, then on the sofa, then in bed hoping to jump up in the middle of the night, grabbing her leather jacket and abandoning her crumpled sheets, her Tupperware box of food and her glass of Quézac mineral water in front of the dormant television, pausing only to throw a handful of biscuits to Mogwai, her cat.

Her index finger slid across the wet glass. She gently patted the iPhone with a towel that was hanging close by, desperately hoping that this would not end the call.

Angie . . . For fuck’s sake, thought Marianne. She was going to tear a strip off that little slut, with her lacy bras and loose tongue.

“Is this a professional matter, Mr. Dragonman? I’m expecting an important call on this number at any moment.”

“Don’t worry, it won’t take long.” He had a soft voice. The voice of a young priest, a hypnotist, or a telepathic magician from the East. A smooth and confident talker, with just a hint of a Slavic accent.

“You’re going to find what I have to say slightly disconcerting. I’m a school psychologist. I cover the whole region north of the Havre estuary. For a few weeks now, I’ve been looking after a strange child.”

Marianne’s free hand played with the water between her half-submerged legs. There were worse things than being woken in your bath by a man, even if he wasn’t calling to invite you to dinner.

The captain’s fingers slid over her damp thigh.

An over-zealous shrink! Angie must have been completely taken in by his smooth psychobabble.

“He expresses himself as if he were a year older than that,” the psychologist continued. “He’s not particularly gifted, but he is precocious. According to the tests that . . . ”

“And his parents really are his parents?” Marianne cut in. “Have you checked with his teachers? He’s not adopted, or in foster care, or anything like that?”

“There’s no doubt whatsoever. He really is their child. The parents say the kid has an over-active imagination. The headmistress is meeting them tomorrow.”

Marianne suddenly felt guilty about the curt way she had replied to the soft-voiced shrink. Just below the surface of the water, the fin of a mechanical dolphin tickled her legs. It had been at least six months since Grégoire, her nephew, had last stayed over; and, given that he would turn eleven next month, it was far from certain that he would ever return to binge on pizza and DVDs at his aunt’s house. She ought to throw these toys away, along with the Pixar films and the Playmobil boxes, throw them all in a bin bag like so many regrets, instead of allowing them taunt her.

“No,” the psychologist insisted. “It’s not being dealt with. Because, as odd as this may sound, I have a feeling the child might be telling the truth.”

“What about the mother?” the captain asked.

“You don’t say! Please get to the point, Mr. Dragonman. What do you expect me to do about it?”

Marianne used her knee to push away the dolphin. She felt flustered by the voice of this stranger, particularly as he almost certainly had no idea that she was naked as she spoke to him, her thighs in the air and her feet resting on the edge of the bathtub.

The psychologist left a long silence, allowing the captain to sink a little deeper into her hot, damp thoughts. Although realistically, the idea of sharing a bath with a man didn’t get her that excited. She had too many hang-ups, perhaps. And there wouldn’t be enough space to cram her body between the cold wall of the bathtub and the muscles of an ephemeral but wellbuilt lover. Her real dream, though she could never admit it to anyone, was to share her bath with a baby. To spend hours splashing around with a little mite who was as chubby as she was, the water gone cold, surrounded by plastic toys.

“You want me to open an investigation, is that it?”

“Not necessarily. But you could at least do some digging. Angie told me that’s what you do. Just check out what the boy is saying. I have hours of recorded interviews, notes, drawings . . . ”

The dolphin was back. It was obsessed.

The longer the conversation went on, the more convinced the captain became that the simplest thing to do would be to meet this Vasily Dragonman. Especially as it was Angie who had sent him. Angie knew what she was looking for. Not a man; Marianne couldn’t care less about men. At thirty-nine, she had at least another twenty years in which she could sleep with all the men in the world. No, Marianne had hammered the message home to Angie during their girls’ nights out: in the coming months, the captain would be going in search of a single, mythical creature: a FATHER. So, in sending this guy her way, Angie was perhaps thinking . . . After all, a school psychologist would make the perfect father. A man with a professional understanding of early childhood, quoting Freinet, Piaget and Montessori while other blokes were content to read magazines such as L’Equipe, Interview or Detective.

“Mr. Dragonman, the usual procedure for a child in danger is to call one of the child protection organisations. But I must admit that this case you have described seems . . . well, unusual. Do you really want to notify the authorities on the basis of the child’s declarations? Does he strike you as mistreated? Do the parents appear dangerous? Is there anything that might give us a reason to separate them?”

“No. On the face of it, the parents seem completely normal.”

“OK. So there’s no emergency. We’ll make some enquiries. We wouldn’t want to put the parents in prison just because their son has an over-active imagination . . . .”

A shiver ran through the captain’s body. The bathwater was now cold and faintly pink, as if the mixture of lavender, eucalyptus and violet essential oils she had poured in had gone stagnant. Marianne’s breasts emerged from the pale surface, large in comparison to the little yellow plastic boat that floated over her belly. A vision of the end of the world, thought Marianne. Two virgin islands polluted by a liner dumping its toxic waste.

The psychologist’s voice snapped the policewoman out of her reverie.

“I’m sorry, Captain, please don’t take this personally, but you’re wrong. That is why I was so insistent with Angie, and why I felt compelled to call you this evening. This is an emergency. It’s urgent for this child. Absolutely urgent. Irreversible, even.”

Marianne’s voice rose. “Irreversible? For God’s sake, you told me the kid wasn’t in any danger!”

“Please understand, Captain. This child isn’t even four years old yet. All those things he remembers today, he could easily forget tomorrow. Or the day after tomorrow. Or in a month or two.”

“What are you trying to say, exactly?”

“That this child is clinging to fragments of memory in order to convince me that his mother is not his real mother. He talks about a castle, a pirate ship, a forest of ogres . . . other things. But in a few days, or maybe a few weeks, as surely as this child will get older, he will learn new things—the names of animals and flowers and letters and the rest of this infinite world that surrounds him—and then his older memories will be erased. And that other mother, whom he remembers today, that previous life that he tells me about each time I see him, will simply cease to exist!” 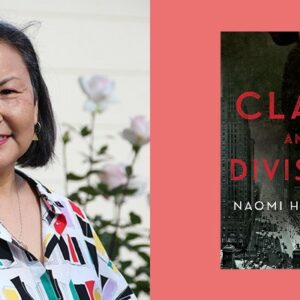 Naomi Hirahara on Writing a New Historical Mystery About Post-Internment Life for Japanese-Americans Recently Naomi Hirahara and I, fully vaccinated, met up at a local soda fountain. In between discussion of pandemic tragedies...
© LitHub
Back to top