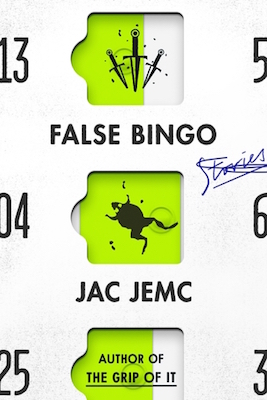 The following is an exclusive excerpt from the story "Strange Loop," from False Bingo, the new collection by Jac Jemc.

John slit the squirrel down the belly. He pulled out the stuffed sausage of inner flesh. It was rare he saw blood leak onto the ­table, so precise ­were his shushing slides of the blade. When he was working like this the time went powdery. He rejoiced in the distracted exactitude.

John was a frame of madly hung trouble, but he had found a hobby that suited him. Hypnotized by the ziplocking of animal skins around wood wool forms, he created cradles for everlasting souls. He tendered their permutations with abandon. He doubled the undone.

He cringed at the idea of fauna allowed to empty by time and science. He filled the dark corners of ­these dancing beasts. His hands remembered the weight of each animal as he lifted it onto the ­table for the first time. He could lock in to that perfect moment of communion. More than the death boarded up within each creature’s skin, he felt a vacated life.

John walked to the chapel alone in the mornings to pray and give thanks. He loved the moment the sunrise tipped through the windows onto his face, like an answer. He looked forward to this private stretch of time, to this unbroken focus.

John was thankful for having been restored to usefulness in the open world, free­ of the sparse room he’d inhabited for the past eight years, free­ of the aggression of the other in-mates, free­ to season his food to his liking. It was true he could feel eyes on him when he visited the grocery store or

bank, which made him wonder if people­ knew. But he did his best to soldier on. He made ­children invisible to him and pretended ­women ­didn’t exist. Even despite the lining of sorrowful repentance, the liberty washed over him regularly, reminding him of relief and regret at once.

John enjoyed hollowing snakes the most. He understood the symbolism: temptation, evil, baseness. But cramping the snakes’ bodies into tight coils allowed him to imagine potential. He ­imagined the poison and then imagined­ it being sucked out of him. He ­imagined his body rushing blood to the swollen site, the skin pulsing with rejection. He ­imagined the comforting constriction as the snake pushed out all of his stale air, making him pure and still. In his mind, serpents could compose a braille of salvation on his body. He felt a solidarity with the reptiles. He felt compassion for their status.

John had found a clubbed rattler along the wooded high-way one morning and decided to make it his own. He stored it in the freezer for a couple­ weeks while he finished the squirrel. His fingers stuck to the skin when he pulled the snake out of the freezer, and he let it thaw in the vegetable crisper.

He made his own molds now. When he’d started, he’d ordered them from a taxidermy supply company, but after­ looking at the shoddy construction, he decided he could very well make them himself by carving thick foam bricks from the hobby shop in town.

He pulled the fangs and the teeth from the mouth of the snake carefully with the Vise-­Grip. He knew, from his reading, that the venom that burst from these­ wounds could remain lethal for years ­after the snake had died. ­There ­were times when he felt light-­headed from holding his breath with concentration, and instinct told him to worry it was the snake’s toxins acting in revenge, to tread lightly, to be aware.

John selected the manicure scissors from his tray and cut an even split from the vent at the base of the tail, working up to the neck. A snake was ­either mostly neck, mostly tail, or all abdomen. He couldn’t­ help but fixate on how it didn’t­ ­matter. He worked his fingers around, peeling the meat from the skin. Occasionally he turned his head away, forcing him-self to forget the trembling urges he kept in check.

He trusted in himself and clipped carefully around the mouth, nose, and eyes, a silky slowness to the work. His mind erased the world above the basement, full of bells and smiling ladies, stinging secrets, last rites, sleeping pills. He pushed out names rude with distance, buckling rage, tolerance. He focused only on separating lips from jaw, scraping excess flesh from rind.

He pinned the hide to a board, careful not to stretch it. He waited. He applied oil. He waited. He spun the skin onto its back, applied oil, and waited again. He covered the skin in paper, and placed a board on top, and waited. This went on for days. And while he was waiting, John knit protein powder into blended fruit as he thought about how he didn’t­ want to return to the version of himself who preferred the way the world looked with a scrim of alcohol over it. He checked his shop online and carefully packaged purchased pieces. He wrapped them in the expired ­free weeklies he retrieved from the library, sealed the boxes precisely with clear tape, labeled them neatly, and walked to the post office, where he greeted Armando by name, and Armando avoided eye contact.

John told himself silently that it ­wasn’t ­because Armando knew anything of his past, but just because­ Armando was shy or had too many customers to remember or was interested in maintaining an appearance of strength that ­didn’t allow for small talk. Armando stamped the word fragile onto each box with a willful violence, and John took his receipt and walked home, where he’d look in the mirror as he washed his hands and pause trying to strike a noble pose, like a historical portrait. He googled “shadow ­people” again but ­there was only so much to learn. He checked his inbox. He looked for ­free porn to watch that showed heavy breasts being clutched firmly by fingers with long nails, watching the claws dig into the soft flesh without breaking it, knowing limits, allowing his imagination to bridge the gap, and then he cleared his browser history.

When all of the waiting was through, he brushed the skin lightly, and watched as the scale covers flaked off. This was his dream, to do the same to himself. To lie flat and feel the locked-up shell of him come loose. To pull warmth from the earth when he ­couldn’t make his own. To bundle up his ugliness and allow the world to thieve it from him naturally.

He rinsed the skin delicately in relaxer to keep it moist, and laid it down. He unspooled thick wire the length of the snake and snipped, securing the foam with glue. With a prayer, he slowly fit the skin over the mold of the head, placing tiny balls of clay into the eye sockets, and securing the glass eyes. He packed insulation into the body cavity, sewing it shut as he went along, with confident yet careful pulls of the needle. Just like that, he closed the same body he had opened.

Thinking of this cycle, he decided to make one more change and fit the tail of the finished snake into its own open mouth. He applied glue where the rattle fit into the throat and let his eyes run around and around the circle, singing to himself silently, I am a problem without a solution. I am a question without an answer. I am a poison without an antidote. I will­ never know what it is I’ve done.

From False Bingo by Jac Jemc. Used with the permission of the publisher, FSG x MCD Originals. Copyright © 2019 by Jac Jemc. 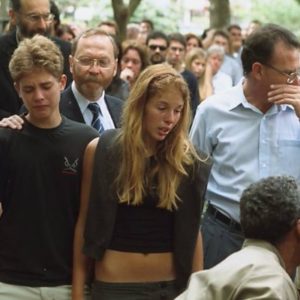