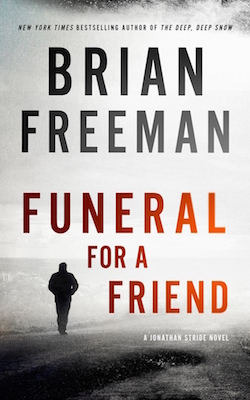 The following is an exclusive excerpt from Funeral for a Friend, by Brian Freeman. On his deathbed, Jonathan Stride's best friend, Steve Garske, tells him that he once protected him by covering up a murder he thought Stride had committed. Now Stride must clear his own name, and solve a mystery that has been shrouded in secrecy for years.

Jonathan Stride lay in bed, his dark eyes wide open, his body stretched atop the sheets. His bare leg brushed the bare leg of his wife, their skin damp with a sheen of sweat. Summer heat through the open window made the bedroom a sauna of wet, scorching air. He couldn’t sleep.

Outside the old house, nothing moved on the lazy Duluth night. Nothing in the world made a sound Not the pond frogs. Not the crickets. Not the spruces towering over the roof Even Lake Superior, on the other side of the dunes, couldn’t muster the energy to throw waves against the sand, and so the beach was silent.

When Stride listened, the only thing he heard was the slow drumbeat of water, driving him crazy.

His touch failed to stir her from  sleep.  She didn’t move at all. She was like a wax figure, not even real.

And still the drip, drip, drip of water filled his mind. He needed to make it stop.

Stride went to the window and listened. There had been a torrent of rain for days, but it had stopped hours ago, and there was no longer a trickle from the gutters. He crossed to the bathroom and checked the faucet and shower, but both were dry. He returned to the bedroom, where he stood beside the closed door and held his breath.

The dripping of water came from the other side. A place where water shouldn’t be. It was as if someone were standing there, soaking wet, each drop from their clothes making a splash on the wooden floor. He wasn’t alone. He could feel the presence of an intruder in the house, and whoever it was must have heard Stride’s footsteps walk right up to the bedroom door and stop.

The two of them faced each other from opposite sides of the door. Invisible antagonists.

His gaze shot to the chair in the corner of the bedroom, where he’d slung his holster and gun, as he always did. He was too far away to get to it. Instead, he reached slowly for the metal door knob and closed his fingers around it. In one smooth motion, he threw open the bedroom door. The knob rattled. The hinges squealed

No one was there. The drip, drip, drip of water vanished, as if he had never heard it at all. His intruder was somehow a ghost.

Stride didn’t understand He’d been so sure of his instincts, but the living room was hot, dark, and empty, and there had been no time for anyone to escape. At first, he assumed it was his imagination playing tricks on him. Then he knelt down and put his fingers on the floor, and they came away wet.

He glanced over his head. A leak from the unfinished attic? No. The ceiling was dry.

He shut the bedroom door behind him as quietly as he could. When he turned on the living room lights, there they were. Footprints. Wet footprints, making a trail away from the bedroom door past the red leather furniture, beckoning him. He followed. The footprints led him to the dining room, glistening on the hardwood floor. Then to the kitchen. Then to the screened rear porch, where the air was damp and thick.

Stride heard someone’s voice, but it wasn’t a voice he recognized. Or did he? There was something familiar about it.

A voice from a long time ago. “This way, ” the man said again.

Stride went through the screen door  and  let  it  bang  shut  behind  him. The door led into the small backyard that scraped along the slope of the sand dunes behind which, hidden from view like a vast beast, was Lake Superior. Nearly every day of his life, he went through that  door,  climbed  the sandy trail, and hiked to the ribbon of beach where the waves lapped at his boots. He would stand there, soaking in the view of the huge blue lake, which constantly changed its moods like a beautiful woman. The skyline of Duluth clung to the steep hillside three miles away.

And yet that wasn’t where he was now.

He went through the door and found himself in a completely different place. Looking back, he saw that his house was gone.

Instead, he now stood on a cliff of black granite, sixty feet over a raging river. The fullness of the summer forest surrounded him. He knew this place well,· it was called the Deeps, where Amity Creek stampeded along Seven Bridges Road like a wild mustang, swirling in whirlpools and  sucking  tree limbs into its current before spitting  them  out in  the cold  water  of Lake  Supe­ rior. From this cliff,you could take a running leap into the  water and swim in the black pool below. He’d done it himself dozens of times as a teenager. He and his best friend, Steve Garske, would shout, jump, fly through the air, crash into the water, and fight the undertow back to the surface. Over and over.

But sometimes, when the rains were heavy, the Deeps caught a body and didn’t give it back.

Sometimes the flooded river held a body down and fed it to the lake.

Stride stared into the rapids, which boomed like deep rolls of thunder and erupted in silver waterfalls. He was right on the cliff’s edge, where the spray made the stone slippery.

A man stood behind him. He was short, no more than five foot six, with a skinny build He had thinning black hair and wide, staring eyes that looked like the mask of a raccoon. His skin was pale. His hair and clothes were soak­ ing wet. He’d been diving into the swollen creek.

Stride heard the noise in his head again, somehow louder than the violence of the river below him. But it wasn’t water he heard. The man on the cliff had a bullet hole in the middle of his high forehead, a perfectly circular black-ringed wound that seeped a ribbon of blood down the man’s nose, around his pale lips, and onto his chin, where it dripped onto the stone like chamber music.

Blood. That was what he’d heard all along. Blood

Stride’s right hand felt heavy. He lifted it and saw that a gun was in his hand, a wisp of smoke trailing from the barrel, a burnt smell in the air. He’d shot this man in the head. The wound was right there in his forehead, but the man still had his eyes open, still had a strange smile on his lips.

The smile on the man’s face widened and turned into a mocking, cruel laugh that went on and on.

But the man raised his arm and extended a bony, brittle finger at Stride’s chest.

His own shirt was soaked in blood. Fresh, cherry-red blood, growing and spreading into a misshapen stain. A mass of blood, the kind of loss no one should survive. And there was a bullet hole in his own chest, ripped through the fabric, right where his heart was.

Let's Talk About Sex in Crime Fiction: A Roundtable Discussion