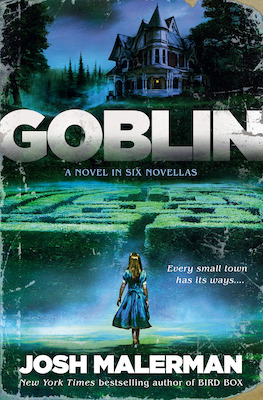 The following is an exclusive excerpt from Goblin, by Josh Malerman, a novel which contains six, terrifying intertwined novellas.

If Tom hadn’t left his sweater in his locker, if he hadn’t gone back to get it, and if he hadn’t passed the main office on the way, the whole dark night might’ve been avoided.

“Hold up a minute, Tommy. Got one more run for you.”

Dammit. Tom had a fun night planned ahead. A great one. Pizza, beer, old movies, feet on the table, and the open prairie of the living room to himself.

Before his boss even said the city name, Tom knew he’d scratch his evening plans. He never said no to Jerry.

To Goblin might’ve been an hour’s drive, but there and back would make it two.

“I know it,” Jerry said, making his most sympathetic face. Cigar smoke rose from the ashtray on his desk and curled about his big belly. “And I’m gonna give you triple for the run. The re­cipient gave us some extra. Wants it done his way. Very specific.”

Jerry shrugged and looked to a stack of papers.

“It’s a pain in the ass is what it is. Obsessive instructions. And he wants it delivered at midnight. No kidding. Maybe there’s a party going on or who knows . . . but I’d send you with a carload of uncuffed prisoners for this kind of money. There’s a whole list of demands attached to the crate.”

Tom removed his yellow ball cap and ran greasy fingers through his greasy hair. Triple. That added up to $1.20 a mile. What with Goblin hanging at least seventy miles north (and maybe even more, Tom would certainly check), not to mention the seventy back, he stood to make a cool hundred sixty-eight dollars on a last-minute run. Tom could drop the box off at mid­night and be in front of his TV by two in the morning. Hell, he could drink all day from there.

“Just follow the directions to a T, Tommy. The fella already made good on his money. Now it’s just up to us not to mess it up.”

The union had the drivers going at eighteen an hour or taking forty cents on the mile. Most of the guys opted for the hourly because most of the guys factored in the dreaded long wait upon delivery. But Tom had been driving for sixteen years and he knew this guy there and that guy here and by the time the option was granted he’d had his routes down pat. And if there was an unex­pected delay? Well, that was okay, too. Tom loved to count the miles. He wasn’t about to give that small distraction up.

“You know, Jerry,” Tom said, smiling, “I kissed my first girl up in Goblin. Alice Pratt. She bit clean through my lower lip.”

Tom pulled his lip out for Jerry to see.

“Jeez. That’s something, Tommy. Maybe you could look her up.”

Tommy once knew Goblin. His mother had taken him there three summers in a row. His eleventh, his twelfth, and his thir­teenth birthdays. Three summers spent swimming in Goblin’s deep lakes, not to mention the ice-cold Blackwater River, on whose banks Tom’s mouth was ambushed by Alice after she fooled him into thinking he was getting a kiss without a bite. He’d played games in the West Fields, walked through Perish Park. Still stand­ing in Jerry’s office, he had detailed memories of passing The Hedges on the east side and driving between the two giant topi­aries framing the highway coming in from the south. He recalled the savage tour of the slaughterhouse and the pleasant one of the Hardy Carroll Goblin Zoo. He recalled the owls, too; postcards and photos of the owls, keepsakes his mother had purchased downtown.

Tom smiled. A hundred sixty-eight dollars was a lot of money to revisit his youth. A place he remembered enjoying, if he re­membered it right.

“Thank you, Tommy. I was planning on making the run myself before you showed up.” He took a long pull on the cigar, then pointed at Tom with it. “The box is already on the lift. You’re gonna need that. It’s heavy as hell. And remember”—he held up his hands like it’s my job to say it more than once— “make sure you fol­low those directions.”

The box was easy to see from across the warehouse. It was tall, taller than Tom. When he climbed the lift and tried to move it, the resistance told him he didn’t have much of a chance without some help.

“Delivering lead?” He removed his cap again and wiped his hairline dry.

He wasn’t even sure how Jerry got the thing where it was.

Crossing the warehouse again, he started the smaller truck and backed it up. Then he got out and started the lift.

It made a nasty squawking sound Tom had never heard it make before.

By the time the machine got it level with the truck, it looked to Tom like the gears were going to fold in on themselves. He climbed up into the truck, took the power dolly, and rolled its lip under the box.

Before trying to move it, Tom spotted the instructions, nailed to the wood.

“You’re more than a hundred and ten pounds, buddy.”

SPECIAL: DO NOT DELIVER BEFORE MIDNIGHT (12 AM)—

RECIPIENT WILL NOT BE HOME TO RECEIVE BEFORE MIDNIGHT—

DO NOT DELIVER PAST 12:30 AM—RECIPIENT WILL NOT BE HOME TO RECEIVE AFTER 12:30 AM. IF RECIPIENT IS NOT HOME (OR DOES NOT ANSWER THE DOOR) BETWEEN 12 AND 12:30 OR IF DRIVER MISSES THIS WINDOW OF TIME, DESTROY CONTENTS OF BOX.

Customer is real serious about this . . . no typo. Destroy box if you can’t reach him.

Tom shook his head. Triple the money or not, this was a weird gig.

DELIVER BOX ALONE—DO NOT LOAD ON TRUCK WITH OTHER ITEMS—MAKE SURE BOX IS ALONE IN TRUCK—DO NOT GET IN THE REAR OF TRUCK WITH BOX AND TRUCK DOOR CLOSED.

DO NOT STOP TO CHECK ON BOX—ONCE BACK DOOR IS SECURE DO NOT OPEN UNTIL YOU HAVE ARRIVED AT 726 ROLLING HILLS DR., ROLLING HILLS, GOBLIN, MI.

IF BOX SHOULD FALL OR ANY NOISE THAT INDICATES AS MUCH SHOULD OCCUR, DO NOT ATTEMPT TO CHECK ON BOX—KEEP DRIVING TO DESTINATION.

There was one more instruction, followed by another note from Jerry in pen:

DO NOT COMMUNICATE TO OTHER DRIVERS WHERE YOU ARE DELIVERING BOX TO—RECIPIENT WANTS STRICT ANONYMITY AND INSISTS ON DISCRETION.

So don’t go yapping on the CB!

Tom let out a long dull whistle. He’d been given some pretty far-out orders before but never—not once—had he been in­structed to destroy a package if no one was there to get it. He’d had to bring a few back, of course, and sometimes they had you drop it off somewhere else, but never this.

He tried to move the box by way of the dolly, but it simply wouldn’t budge.

“One hundred and ten pounds, my ass.”

He found that if he sort of knelt and put his shoulder into it, if he put all his weight into the middle and lower part . . . the box slid. And he was sweating when he finally got it against the wall. He had to take a second before wrapping the straps around the box and securing them to the truck wall. Then he secured the power dolly to the opposite wall.

“I won’t be seeing you until Goblin. And we’re both better for it!”

He got down from the truck and pulled the rope, slamming the door closed. After locking it, he walked to the cabin and stopped at the driver’s-side mirror.

He looked at himself.

“You haven’t been to Goblin in thirty years.” Then he smiled. “Think you’ll recognize the city? Think the city will recognize you?”

He heard a sound like a hammer falling a short distance to the ground. He looked over his shoulder, deep into the warehouse, then climbed into the cabin at last.

“Don’t let mysterious boxes freak you out, Tommy,” he told himself. “And don’t follow directions from people who don’t know any better than you do.”

The Art of Writing About Psychopaths: A Roundtable 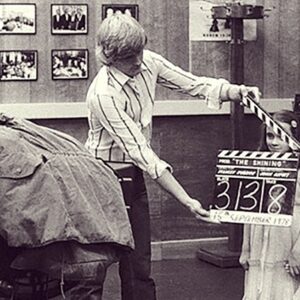 The Art of Writing About Psychopaths: A Roundtable This roundtable was inspired by You Love Me, Caroline Kepnes’s majestic continuation of the adventures of everyone’s...
© LitHub
Back to top