Spain's Costa del Sol was once the go-to destination for Brits on holiday—and a safe haven for the UK's most notorious criminals.

By the late 1970s Spain had become the most popular foreign destination for UK holidaymakers and, increasingly, the residency of choice for expatriates looking to tan their bodies and knock back cheap booze. Discount flights, guaranteed sun and locals with a warm welcome (and a willingness to speak English) combined with an increasing UK subculture of traditional pubs, Sunday roast dinner, fish and chips and warm ale made Spain a magnet for Brits—and especially the Costa del Sol. The region became to many in the UK what the Caribbean became to some in the US—a bolthole that was close enough to endure the flight but far enough away to add that exotic magic fairy dust to a break.

But with that boom came a less welcome element.

In 1978, a century-old extradition treaty between the UK and Spain expired, and there was suddenly little or no chance of fleeing British criminals being sent home to face trial. The Spanish coast was seen as a safe haven, so the crooks took to the sky and then to the sun. British gangsters, stick-up artists, grifters, hitmen, thieves and pimps increasingly saw the Costa del Sol in the southeast of Spain as a means of escaping the grey skies of Britain—and more importantly, the grey walls of the prison yard.

The Costa del Crime was born.

Prior to 1978, the Costa del Sol was the place to be if you were rich or famous or just wanted to be seen. Movie stars such as Stewart Granger and Sean Connery, society hostess Gunilla von Bismarck and wealthy arms dealer Adnan Khashoggi all flocked there. It was a sun-scorched playground for celebrities, wannabes and those with a hefty bank balance. When the treaty lapsed, this changed. As David Baird, the man who coined the term ‘Costa del Crime’, said:

‘Brits on the run began buying property in the late 1970s and early 80s, flaunting their ill-gotten gains and frequenting the top night spots. Hitmen, conmen and bank robbers rubbed shoulders with bullfighters and aristocrats.’

Although only a relatively brief period in Anglo-Spanish relations (the extradition loophole was plugged in 1985 and a new treaty signed in 2001), the ‘Costa del Crime’ became synonymous with some of the UK’s most notorious criminals as they publicly thumbed their noses at the British authorities. Safe in what Rob Hogan, then of the Olive Press, Spain’s leading expat newspaper, called ‘a gangster’s paradise’, the list of criminals who took refuge in Spain was long. Among them were:

– London gangster and nightclub owner Ronnie Knight, who spent eleven years hiding out on the Costa del Sol. So cocky was he about evading the law, that when he married his third wife in Spain in 1987, the wedding cake was in the shape of a prison. He was finally arrested and jailed for his role in a multi-million-pound armed robbery in 1994.

– Brown Bread Fred (real name Frederick Foreman), a henchman of two of the UK’s most notorious gangsters, the Kray Twins, fled to Spain in the 1980s. He’d disposed of Jack ‘The Hat’ McVitie’s body after he was killed by Reggie Kray.

– John ‘Goldfinger’ Palmer, who was at one time arrested but subsequently cleared of being involved in the Brink’s-Mat robbery—during which £25 million in bullion, diamonds and cash was stolen from a warehouse at Heathrow airport in 1983— had property in Spain. He was killed by a Spanish hitman in 2015.

By the early 1980s over 100,000 Brits had a first or second home there, and, as Duncan Campbell of the Guardian points out: ‘By the time the extradition loophole was closed in 1985, the area was established as “the bit of Europe that fell off the back of a lorry”.’

But 1985 didn’t signal the end of the Costa del Crime. The Spanish constitution prohibits retrospective laws, and, as such, the treaty did not immediately affect any UK suspects living it up in Spain. They knew they could easily fight any attempt to force them back home. The only downside was that they also knew if they left Spain, even for a single day, they could, on return, face immediate extradition.

When the new treaty was signed in 2001, it signaled the end of an era, but the specter of the Costa del Crime still haunts the country. The preferred crime is now drug smuggling, and the southeast coast of Spain has become a key step on the well-worn drug trail from West Africa to Europe. But this involves a very different type of criminal to the ones of the late 1970s and early 1980s. As Jason Coghlan, a former armed robber and now the boss of a business which helps those facing legal difficulties abroad, said: ‘Young firms are very different to my generation. For example, instead of using baseball bats they’re more likely to use a machete. It’s a scary weapon.’

In 2018, the Spanish Government listed 113 organized criminal gangs operating in the Malaga area (which includes the Costa del Sol). Fourteen of those gangs were UK-led (fourth only after the Spanish, Moroccans and Colombians). In the last few years, a joint Irish–Spanish operation forced many criminals out of the country. The resultant power vacuum led to inter-gang rivalry and an uptick in violence. In April 2018, the Haven beach club in Estepona was burned down by Colombians as a warning to the owner, who was subsequently shot outside a church in front of his family. This triggered a series of events whose consequences are still resonating along the coast.

Even in and around the normally peaceful setting of Javea, a town on the Costa Blanca where I am lucky enough to own a small apartment, drugs raise their nasty heads now and again. A couple of years ago, only a twenty-minute drive from our apartment, the largest synthetic drug factory ever found in Spain was uncovered, and, in the summer of 2020, the crew of a pleasure boat spotted 17kg of cocaine lying on the seabed of the bay in which Javea nestles.

Perhaps unsurprisingly, the Costa del Crime has made its mark on popular culture, inspiring films, novels, and TV series alike. Sexy Beast (2000), starring Ray Winstone as a retired gangster in Spain, and The Hit (1984), with John Hurt and Terence Stamp, have graced the silver screen; J. G. Ballard described the criminal tendencies that hide under the sun-bleached belly of the retired expats’ Spanish hideaway in his novel, Cocaine Nights (1996); more recently, the UK’s obsession with Spain and crime has been reflected in the 2019 TV series, The Mallorca Files, in which a German and a British detective fight over how best to police the island; and the 2019 Netflix series, Drug Squad: Costa del Sol dramatises the activities of a 1970s narcotics unit.

When I decided to write a new crime series under the pen name of Morgan Cry, I was similarly inspired by Javea. The town is an eclectic mix of locals and expats. With the idea of the ‘Costa del Crime’ ringing in my head, I decided to base the first book, Thirty-One Bones, in the town of El Descaro (Spanish for ‘the nerve’—as in ‘the nerve of it’). El Descaro is a fictional town loosely based on Javea and the action centres on a group of expats called the ExPatriots who populate a local watering hole that goes by the name of Se Busca (Spanish for ‘wanted’). When the ExPatriots’ matriarch in crime dies suddenly, her estranged daughter flies out for the funeral only to discover that her mother has stolen over a million euros from a property scam the ExPatriots were involved in. The daughter is quickly on the hook for the money—and possibly even the death of her mother.

Expats, fraud, murder, seedy individuals, intrigue, evading the law . . . As you can probably tell from the above, all the core elements of the Costa del Crime have influenced my work. And it’s probably prudent, at this point, to answer the question I’m most often asked. Are any of your characters based on anyone you have met in Spain? The answer is no—and I’m sticking to that line.

This isn’t to say that the Spanish coasts are dangerous, Wild West enclaves. Far from it. We law-abiding Brits love the place. According to the UK’s Office for National Statistics some 300,000 Brits live happily in Spain and we took over 18 million vacations there in 2019. The combination of sun, sea and sangria is an alluring attraction. Spain is a wonderful place with stunning scenery and warm, welcoming people. Most of the expats who live there are not rooted in the criminal world—at least none of the ones I’ve met have ever confessed such to me. But, then again, would they? For the sake of completeness, I was recently approached and asked if I was interested in ghostwriting a Russian mob story (I declined the offer).

Javea and the Costa del Crime legacy provides a fertile canvas and a ready-made backdrop for a crime novel and, with that in mind, my second book, Six Wounds, is now with my publishers.

To conclude, it may be valid to ask the question: will there be a time when the Costa del Crime tag will fade? Well, I’ll leave the last word on that to a senior Spanish cop who, when asked the same question, replied:

‘When is the Costa del Sol going to become a place of rain and grey skies . . .?’ 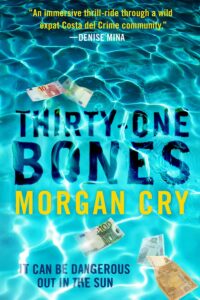 Morgan Cry is the alias of Gordon Brown, who has written eight Tartan Noir crime novels and thrillers, including the Craig McIntyre series. He is a founding director of the Bloody Scotland festival that celebrates crime fiction every fall. Thirty-one Bones is his first novel as Morgan Cry. He is married with two children and lives in Glasgow. 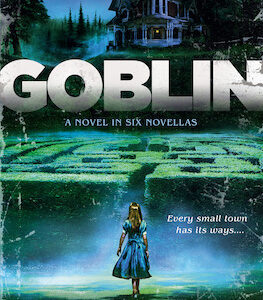 Prologue: Welcome 1. If Tom hadn’t left his sweater in his locker, if he hadn’t gone back to get it, and if he hadn’t...
© LitHub
Back to top