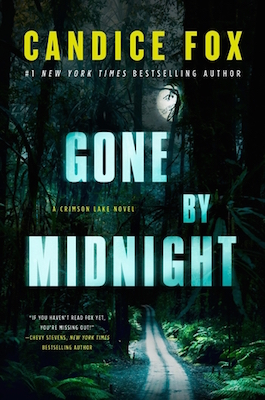 The following is an exclusive excerpt from Gone by Midnight, by Candice Fox. Sara Farrow is distraught when she discovers her son has vanished from a locked hotel room. But she can't turn to the police, and so seeks help from two of the unlikeliest places: disgraced police officer Ted Conkaffey and convicted murderer Amanda Pharrell.

I was marched through a foyer packed with police officers standing in groups, looking at maps and talking on phones, the seating area and a huddle of tall tables completely swamped by blue uniforms. There was a queue of worried-looking people who appeared to be checking out of the hotel, but instead of doing so at the reception counter they were being taken one by one into rooms and having their suitcases opened on a large table. Every face in range turned toward me. I walked straight and tall between the cowboys as we turned left off the foyer and down a hallway into a large boardroom stuffed with the older, harder faces of non-uniformed cops. The only face I recognized was that of a visibly stressed Damien Clark, the chief superintendent of the Crimson Lake police.

“Chief, we’ve brought you Ted Conkaffey, as requested.” Chief Clark looked at me, his mouth slightly parted in shock. I stared back, my jaw set. “I want my lawyer,” I said.

“Would you . . .” Chief Clark glanced around the men and women he’d been meeting with, the mass of papers and maps on the board- room table before him. “Would you all excuse me for just a minute?” Chief Clark marched past me, bumping Gamble on the shoulder.

The two cops looked at each other. We followed Clark down an- other hall into a smaller boardroom, this one crammed with chairs stacked against one wall.

“What the fuck is this?” Clark snapped at Frisp.

“We . . .” He looked at Gamble for support. “You asked us to bring you Ted Conkaffey. You said, ‘Get Conkaffey. Bring him in.’” “Yes, I said, ‘Bring him in!’ Not ‘Bring him in.’” Chief Clark squeezed his brow, making the skin above his eyebrows pucker. “I literally meant bring him here, to this place. Not arrest him and march him in handcuffs past a hundred officers. Holy fuck. Did any press

The cowboys looked at each other, then at the chief. Then all three men looked at me.

I was uncuffed. I sat in the small boardroom and listened as Chief Clark roared at the two officers on the other side of the door. I winced as he slammed the wall between us with his palm to emphasize his words.

“Did you honestly believe that if I thought Conkaffey was a person of interest I’d have sent two fuck-knuckles in a squad car to pick him up?”

“You didn’t even have an arrest warrant!”

I rapped my fingers on the boardroom table and fantasized about poking my head out the door and requesting a coffee. When Chief Clark came back into the room he had my phone, which he set on the table between us as he sat down, taking a moment to rub his face hard with both hands. His stubble made a rustling sound against his rough palms.

“There has been a terrible mistake,” he began. “You reckon?”

“All I can do is offer you my apologies. I didn’t bring you here because I believed you were a person of interest in the case I’m dealing with.”

“Well, that’s just dandy.” I smiled, taking my phone from the table between us. “Have a nice day, Chief.” I stood and turned to leave the room.

I paused, my hand on the polished chrome doorknob. The phone was vibrating as messages, no doubt from my lawyer, came through. I waited.

Article continues after advertisement
“He went missing from a room upstairs that had three other boys in it,” the chief continued.

“He went missing from a room upstairs that had three other boys in it,” the chief continued. “Last night, around midnight, we think. The boys were all sleeping. Their parents were downstairs in the restaurant. We’re approaching seven hours, and there’s no sign.”

I let my hand fall from the door.

“Oh, I get it,” I said. “Child goes missing. Those shithead officers assumed you’d pick up the local pedophiles, give them a shake, see what falls out.”

“We’ve looked at you already.” Clark sat back in his chair, folded his arms, shrugged.

“You had no legal cause to do that,” I snapped. “I’m no longer a person of interest in the Bingley case. To you I should be just a regular, law-abiding citizen.”

“Someone at your address was using the internet to stream a movie until about eleven thirty p.m.,” he said. “And someone used your phone at that location to play a game called Candy Crush until about eleven forty-five p.m. The phone was idle then until three a.m., when it was transported to a veterinarian’s office. Your credit card was used there.”

“Sorry to hear it,” Clark said, the sentiment totally devoid of warmth. “At the end of the day, the timeline doesn’t fit. You didn’t have enough time to get to the hotel to abduct the boy.”

“Unless I had someone use the phone and internet at my place as an alibi,” I said, for some reason.

“Look, I’m satisfied it’s not you,” Clark said. “We don’t have your car on CCTV in Cairns. We don’t have you on the hotel cameras. And your former accusation, however unproven, involved a teenage girl. I’m sure you know most pedophiles tend to stick to a certain type.”

I felt my back teeth lock together.

“You haven’t been my concern,” Clark continued. “Crimson Lake is where bad people come to disappear. I’ve got every kind of scum- bag you could imagine on my beat. There are runaway rapists, drug dealers, wife killers, and retired hit men in my jurisdiction. The place is a fucking jungle. A quiet accused pedophile who lives on the edge of the lake fifty k’s from the nearest kid doesn’t interest me.”

“The boy’s mother has requested you.”

I pulled out the chair I had just been sitting in and sat down. We both knew I wasn’t going anywhere yet. “Seven hours. She’s calling in backup already?”

“Why does she want me? Are you going to allow it?” I asked.

“I don’t know why she wants you. She didn’t tell me. It could be all the press you got over the last case. Maybe she’s one of your . . . fans.” He looked me up and down, his lip curled. He meant the league of supporters I’d accrued over the time since my arrest, a group assembled around a podcast that professed my innocence.

“If you agree to take on the case,” Clark continued, “I’ll allow it on the proviso that you report anything and everything of interest you uncover to me. You’ll be the closest person to her in the investigation, and you’re not police. She may let something slip to you that she doesn’t want us to know.”

I put my elbows on the table and held my head. I needed sleep. Coffee. A minute’s reprieve from the screaming fight-or-flight panic still thumping through my brain that hadn’t quieted since my ride in the squad car. A thought pushed through the chaos, that today was the day my daughter was arriving from Sydney. If I took the job I’d be trying to find a missing child while I was supposed to be spending time with my own. The selfishness of the thought didn’t escape me. My phone was still going mad in my hand. I slipped it into my pocket. “Why are you in charge of this case?” I asked Clark. “You’re Crimson Lake. This is Cairns jurisdiction.”

“Robert Griswald, the Cairns chief, was in Sydney on holiday when the call came through. I was the first ranking officer to respond, so I’ve bought it.”

“So I’d be working alongside your team?”

“Every team in the region is on this,” Clark said. “And we’ve got specialists in Sydney on standby. They’ll get approval to head here at the twelve-hour mark.”

“Aren’t we getting ahead of ourselves?” I asked. “It’s seven hours.

The kid could have gone for a walk.”

“He’s not on CCTV leaving the hotel from any of its four entrances.”

“He could still be here. Hiding in a cupboard somewhere.”

“We’ve done a top-to-bottom search of the hotel. We’re about to do a second one.”

There was a different feeling creeping up my insides now, like cold fingers trailing along my ribs. Chief Clark and I sat in thought for a few minutes. Questions kept coming, but I knew there was no point in asking them now. I needed to take a breather, get my head straight. Sort out the avalanche of actions I would have kicked off between Sean, Amanda, and Val. Figure out how I was going to take this case with my daughter in my care.

“I’m approving you to assist on this case,” Clark said, clasping his hands firmly on the table. “But I don’t want Amanda Pharrell anywhere near it.”

I should have known this was coming. During our last case, Amanda and I had been tasked with discovering who killed two young bartenders in a roadside hovel east of the lake. We’d worked alongside the police, and Amanda had taken the lead, as I’d been tied up down in Sydney fighting a new accusation against my name. Amanda had indeed discovered who murdered the bartenders, but a newly appointed detective in Crimson Lake had been killed. It made sense that Damien Clark blamed Amanda for Detective Inspector Pip Sweeney’s death. They’d been working together, like partners, and Amanda was just as hated for her own dark past as I was, having served eight years for the murder of her classmate Lauren Freeman. I found myself shaking my head immediately, hardly giving the issue any thought.

“No deal. We’re a team. Amanda and I work together.”

The door burst open beside me so hard it slammed against the stacks of chairs along the wall, almost toppling them over. As though summoned by the chief ’s words, Amanda strode triumphantly into the room and thrust her arms in the air.

“Never fear! Crack a beer! Let the people cheer, for Amanda is here!” she bellowed.

Whatever it is, it defies logic. It’s a slippery, indefinable thing that arms her with an eternal supply of social confidence, while at the same time preventing her from doing anything except horrifying, disturbing, or annoying people everywhere she goes. She has apparently no emotional range, no gut-deep reservoir of guilt or anger at her bloody past, and yet she wears the consequences of that same past on her skin in neck-to-toe tattoos. If she is scarred at all by her past, the only outward evidence of it is the jagged pink scars like lightning strikes that crack and crease her tattoos, the results of a crocodile mauling that almost took her life. When she was young, Amanda killed her teenage classmate by accident, stabbing wildly in the dark at the first thing she fell upon, trying to defend herself from a rapist. Amanda suffers a physical twitch from the incident, cannot travel in cars because of it, spends her life as the town pariah because of it, and yet claims it means nothing. She has militant rules for those around her, and none for herself, and those are just the beginnings of her problems. Having spent a year observing Amanda’s deep-seated quirks, I was only mildly surprised to see her there in the doorway, materialized out of thin air, in a gold-sequined mini- dress and six-inch stiletto heels painted with red flames. 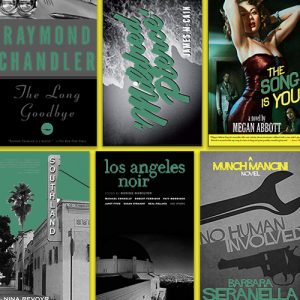