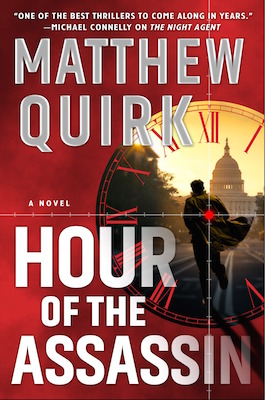 The following is an exclusive excerpt from Hour of the Assassin, by Matthew Quirk. Secret Service agent Nick Averose has made a unique career out of his ability to think like an assassin. But when he is sent to assess the security threats at the home of a former CIA director, he becomes entwined in a deadly plot that frames him as the perfect suspect.

How did that night go so wrong? Through the next desperate hours, the question wouldn’t let go of Nick as he picked apart every moment that had brought him to Widener’s office, looking for some way he could have known, could have stopped it all.

But the day that ended with Nick holding that knife had started ordinarily enough, or whatever passed for ordinary in Nick’s world.

Many former Secret Service agents go into corporate security, guarding VIPs and managing risk for multinational companies. But Nick had his own shop that he ran out of a converted carriage house in the Shaw neighborhood of DC. He liked working for himself and setting his own hours. His reputation brought in more clients than he could handle, and he could afford to pick the more interesting challenges.

That morning he’d come in early with breakfast sandwiches for himself and Delia Tayran, the twenty-seven-year-old engineer who handled the IT and technical side of the business. She was Nick’s only employee, though she was more like family.

They’d finished going over the plan of attack on Widener’s residence for a third and final time by eleven.

By eleven thirty, Nick was in handcuffs, his arms bound behind his back. Delia had locked him up like a pro. They were taking a break, messing around with a strange pair of cuffs, seeing if Nick could pick his way out of them. Locks and safes and restraints were all part of the trade. Delia always seemed to know when Nick could use a respite from the tunnel vision of plotting a job and the role he played.

He worked against his linebacker’s build, trying to pass the cuffs under his legs and in front of him. He hopped and tugged and felt them budge against the back pockets of his jeans. They moved an inch farther, but  that threw off his balance and he  had to lean against the wall.

“Mercy?” Delia asked, standing in front of him with her hands on her hips, laughing.

“Never. Who made these?” He slid his fingers over the metal, feeling along the hinge, looking for the keyway, trying to angle a bent pick inside.

“The Stasi. Some hacker guy I met at a conference let me borrow them. Don’t scratch them.”

Delia looked to her side and her jaw dropped slightly. Nick craned his head back.

A woman stood in the open door of the shop, arms crossed, a mix of apprehension and wonder on her face as she took in the scene.

Delia leaned down and fumbled with the key while Nick smiled at their guest. Her name was Alexandra Hart. She was a lawyer for Aegis, a high-end executive protection firm based in London and New York. They handled Malcolm Widener’s security and had hired Nick to run an audit at his residence that night.

Hart wore a tweed dress with short sleeves that showed the upper arms of a dedicated athlete. Her hair, her mouth, her posture—everything was pulled tight in a determined beauty.

“Be with you in a minute,” Nick said.

The cuffs released. Nick rubbed his wrists and held his hand out. “Alexandra, come on in.”

She tucked her small attaché under her left arm and shook his hand while eyeing the red marks from the cuffs.

“Escaping illegal restraints,” he said. “Part of the portfolio.”

“Of course,” she said primly, and brought out a file. Nick always signed the letter of authorization in person. They executed three copies. After Nick did tonight’s job at Widener’s house and saw just how vulnerable the former director was, he would document any weaknesses and report them back  to Hart.

“I’m eager to hear your findings,” she said.

“I look forward to it,” Nick replied, and puzzled over his own formal diction. He was too old and too married and too professional to be thrown by a gorgeous woman, but there was some- thing else about her his attention kept snagging on, something beneath the all-business exterior.

Nick watched her walk out and turned to see Delia looking at him. She rolled her eyes. Nick checked his watch. They were way ahead of schedule. He pointed to the cuffs.

Delia squinted and seesawed her hand in the air. “‘Close’ would be generous. I know we’ve been over this before, but I have one word.”

“Yoga,” she said, and closed the cuffs around his wrists. He was out of them in eight minutes.

That was it. A regular day. A good day. No sign of the storm to come.

At six o’clock, Delia went home after they finished prepping gear. Nick liked to do his final run-through alone, sitting in silence, going through the  whole  operation  second-by-second in his mind.

He was ready. He drew his knife from the sheath and put   it in the top drawer of his desk, then went out to the cabinet safe where he kept his gun. He checked and rechecked that the Smith & Wesson magazine was unloaded and the chamber clear. He placed the ammo in the safe, along with a copy of the letter of authorization in case anything went wrong.

He put the paperwork in his pocket and—armed with an empty sheath and gun—locked up and went outside. His truck was parked in the front. He started it up and headed for Malcolm Widener’s house. 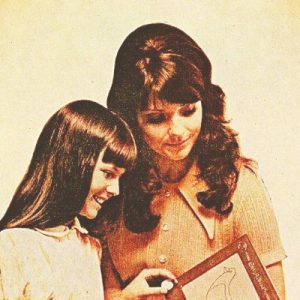 The Complicated Literature of Daughters and Mothers There are few relationships as fiercely loving or as potentially fraught as that between a mother and her daughter. For most...
© LitHub
Back to top