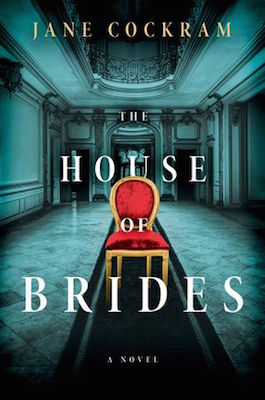 The following is an exclusive excerpt from House of Brides, by Jane Cockram. Miranda is a famous social-media influencer whose meteoric rise has ended in a reputation-ruining blow. Desperate for some peace and privacy, she travels to England at the request of a distant cousin. Miranda only knows about this side of the family from a book written by her deceased mother—but the more she stays in their mansion, the more she realizes that the women of the family are embroiled in a dangerous game.

“Have you been in this part of the country before?” the taxi driver asked as we approached Barnsley for the first time. The en- tire countryside was bathed in tepid light, the day not quite sure if it had arrived or not.

“You’re in for a treat.” The car eased off the motorway and onto a smaller carriage road.

The land around began to open into fields, and beyond them, wild hills covered in bracken for which I had no reference point. The never-ending plane ride followed by a long wait at Heath- row for  the bus and now a taxi from the nearest town: I had    no idea whether it was day or night, let alone where on earth I was or what the local fauna was called. It was a far cry from the warm and fuzzy scene I had envisaged for my arrival at Barns- ley. I knew it had been a fantasy, but in my jet-lagged and dis- oriented state I was beginning to rethink my plan to show up unannounced.

In the distance, an unfamiliar animal stood frozen on a rocky outcrop.

The driver seemed to sense my confusion. “The edge of the moor,” he said. “We follow it all the way around to Barnsley now.”

“A stag. They’re rampant around here. There’s talk of culling them, especially after the accident, but you know, animal rights groups and the like . . .” He left the sentence unfinished and shifted in his seat.

After a moment more, he added, “Do you have sensible clothes?” “Yes, I think so. I have a proper jacket, and boots—is that what you mean?”

His eyes scanned my travelling outfit in the mirror. The cotton pullover and jeans that had seemed appropriate in the rising heat of an Australian summer were barely enough in the whipping cold that had confronted me when I left the bus. I saw his eyes glance over my mother’s fob chain around my neck. It shimmered in the last of the afternoon light, and I attempted to tuck it into my clothing.

“You’ll need practical clothes down here. Wellingtons. Wet weather gear.” He looked at me in the rearview mirror, sizing me up. “I don’t suppose you’ll fit into Daphne’s things.”

My skin, below its layers of impractical clothing, prickled slightly. We sat in silence as the day resolved itself into evening, darkness settling quickly. Finally, a long way down a twisting lane covered on either side by scraggly hedgerows, the driver stopped the car in a small turnout.

Alongside, I could make out the shape of an enormous pair of iron gates unequivocally fastened with a sturdy chain and lock. There was a sign, with gold letters announcing Barnsley House, but the light above was dark.

“They don’t know you’re coming.” It was a statement, not a question.

“My phone doesn’t work over here. Is there another way of getting in?”

“The family use the private entrance down the road.”

“Yes.” Trying to sound more confident this time, I added, “That’s what they said, I remember now.”

I waited. The driver hesitated, and then sighed. He pushed the hand brake down and eased the car back out onto the road.

“Who did you say you were again?”

“A friend. Of the family.” It had been a split-second decision to lie. Not sure why. Reverting to form. I hadn’t wanted this man to ask questions.

“They don’t get many friends calling in these days.”

He watched me carefully in the rearview mirror. I could only hope the surrounding darkness was disguising some of my nerves. The last thing I needed was questions. I had reclaimed Sophia’s letter from my father’s study; it burned in my jacket pocket. It was surely my imagination, but it seemed to radiate heat as we drove slowly along the tree-lined road, like it was picking up some kind of signal from the landscape.

“Here it is. Barnsley House,” he said as we pulled in again, only slightly farther down the road.

The gates were open. The driver hesitated before he decided to press on, an ever so subtle lurch that brought me against the tension of my seat belt.

The driveway, now we were off the main road, was winding, and in some places it dropped right down to meet the rough grey sea. “You look familiar,” the taxi driver said, eyeing me in the mirror. “Have you been in the news?”

I had, but it seemed unlikely that news of my misfortunes would have spread this far. Before everything that happened, I used to get a little frisson when people recognized me. I used to feel special. Even though it was rare, I liked it. It was one of the things I missed about my old life. “I don’t really follow the news,” I said, and it was true. Much to my father’s despair, I had never had the thirst for news he did. Like many people, I only found the news interesting when it had some bearing on my own life, and then in the last year, suddenly, my life became the news, and I lost all taste for it. I knew from experience just how destructive the news could be to a person.

Which is why I had stopped googling Barnsley and the Sum- mer family soon after I started. Certainly, I had enjoyed an initial frenzy of gorging myself on the history of the house and reading about the restaurant, but there were some links I couldn’t click on. Some publications I couldn’t read. After what they had writ- ten about me, I had sworn never to read anything written on their pages again.

“You look like that actress, that’s it. Thought I knew you for a second.”

I breathed a sigh of relief.

There were gaping holes in my knowledge, but I preferred it that way. I was going to find out firsthand or not at all. I wasn’t interested in someone else’s trial by media.

As if he read my mind, the driver said, “The internet down this way isn’t terrific.”

“It’s okay, I can find somewhere in town if I need to go online,” I said, not really sure which town I was referring to, hoping that somewhere in this isolation lurked a town, preferably one with a cozy café and free Wi-Fi. As much as I was enjoying being offline, it was still somehow comforting to know it was there.

Just call me Patty Hearst. “Which town is that, love?”

“The one where I got off the bus, South Bolton.”

“Did you get a look at the place?” He laughed. “That’s it, a bus stop on the main street. There’s no internet cafés tucked away, you know.”

“Is there a library?”

“Right.” That might come in handy down the track. I made a note to keep an eye out for Minton. And Jean Laidlaw.

Low clouds, barely visible in the dark, moved towards us, and the first drops of rain landed on the windscreen. “Right on cue,” the driver said from the front seat, giving me yet another curious look in the mirror. There was something else in the look this time as well. A warning.

I chose to ignore it as we rounded the last bend and emerged from under a canopy of trees, and I saw the house for the first time. The magic of Barnsley entered my bones from that very moment.

It was not what I was expecting. It looked different from the back. Smaller, more like a house than the colossal fortress I had conjured up in my mind. I didn’t know the darkness was conceal- ing the vast bulk of the house, and that light shone only from the windows in the part of the house the family used, and that was a very small part. The house would reveal itself in increments, just like the family who lived inside it.

To me, the dark trails of bare ivy vines framing the glowing windows and doors were beautiful, far lovelier than the sunlit images I had seen. But the place was deserted. We had stopped in a large gravel turning circle beside a small vestibule. There were no cars anywhere. I couldn’t see any guests. The garden was in darkness.

If my intuition was right, I was the only person in the place. My plan of arriving as an anonymous hotel guest was on shaky ground.

A black Labrador came racing out from the side of the house, and the taxi driver gave a cry of delight. He leapt from the car and let the dog jump all over him, not bothered by the muddy paws or the slow-falling drizzle. The wrestling might have gone on in- definitely had I not gone to fetch my rucksack from the boot. He extricated himself and intercepted me.

The dog jumped around him, whipped into a frenzy and unable to calm down. His tail whacked into my leg, hard, and I cried out. The driver looked at me strangely and then patted the dog on the head reassuringly. “There you are, Thomas, there you are,” he said, his voice soothing.

“Not a dog person, really,” I mumbled, as if it wasn’t self-evident. I paid the driver, carefully counting out the unfamiliar notes, uncertain whether I needed to tip him. I decided to give him five pounds, mostly for not asking too many questions. He seemed de- lighted with that and was about to go when he changed his mind and came up close.

“Are you sure you’re all right, going in there?”

“Fine. They’re expecting me.” Still the dog circled. There was no movement inside the house, no light switching on in the vestibule. Surely someone would follow the dog out any moment now, or else what was the point of him?

In the small vestibule outside the back door  was  a  rusty dog’s bed and piles of discarded shoes. Gumboots and trainers, flip-flops and school shoes, they were all tossed together in an indiscriminate pile. Everything about it said domestic bliss: a happy family lives within.

“You don’t have to worry about me,” I said, my hand instinctively going to the necklace, touching it through the light cotton of my jumper.

The door in the vestibule opened, and a woman’s head popped out. A cat slunk out behind her. The dog barked, and the driver ducked quickly back into his car. He started the engine, and the wheels turned so quickly that small pieces of stone flicked up and hit me in the shins.

It was only once the noise of the car had subsided that the woman spoke.

“Have you come about the nanny job?”

From House of Brides by Jane Cockram. Used with the permission of the publisher, HarperCollins. Copyright © 2019 by JAne Cockram.

The Real Dracula Is a Detective Story—and an Incredibly Complex, Fascinating Mystery 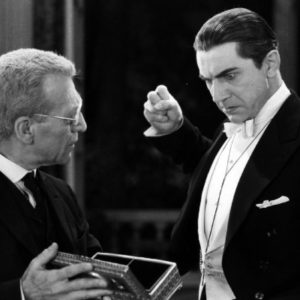 The Real Dracula Is a Detective Story—and an Incredibly Complex, Fascinating Mystery Though it might have you think otherwise, the epistolary Victorian monster novel Dracula is a detective story. Written...
© LitHub
Back to top