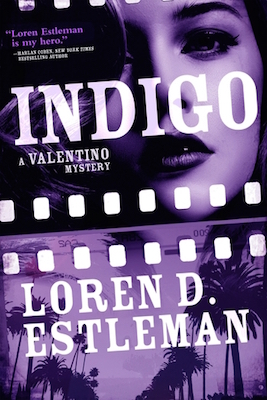 The following is an exclusive excerpt from Indigo, by Loren Estleman. Hollywood film industry detective Valentino is called to an estate to help a studio reacquire an old film which never saw the light of day after its mob-affiliate star went missing. Valentino is instructed to begin a PR campaign around the disappearance, but as he does that, he realizes that some secrets are meant to stay buried...

“Retired film editor died last year; he was there when RKO changed hands.  I bought his estate.”

“Don’t tell me.  You bought it all just to get that one item.”

“No, there were some out-takes from a couple of Astaire-Rogers musicals and six minutes of the original Untouchables nobody’s seen in fifty years; also a Movieola machine in cherry condition and a box of cutting and splicing tools.  I sold the tools to a collector for five times what they were worth.  I usually make money on these deals.  Heck, I unloaded that theater in Prague to Hilton.”

“I can’t believe I missed a sale like that.  What was the editor’s name?”

“You wouldn’t recognize it.  He was out before the industry gave negative cutters screen credit.  It was a private deal in Europe.”

Valentino was certain this rapid-fire response was a lie.  Shrewd as he was, Bozal lacked the imagination to make up a name for his mysterious source that would convince a fellow traveler.  Most likely he was protecting a favorite fishing hole.

“You have the negative?”

“No such luck.  Studio security never let those out of their sight, even when the high exalted muckety-mucks decided against release.  He probably remastered the film, made a fresh positive, and smuggled it out in the confusion during the change in management.  When you think of how much contraband managed to walk off those lots over the years—”

The old man showed no offense at the interruption.  He smiled and scooped a telephone handset from its niche in the wall.  “Esperanza.”

Minutes later the attractive young Hispanic woman entered the booth.  Her simple red sheath and modest heels accentuated the contours of her muscular (but by no means unfeminine) calves.  She directed another brief appraising glance at the visitor, then shifted her attention to her grandfather.

“Mr. Valentino will show you what to do.”

“Grandfather, I know how to handle film stock.  On top of what you taught me, my teachers gave me a thorough grounding in all aspects of communications technology, even obsolete—”

“Handling is precisely what I don’t want you to do, niña.  Pay close attention to everything this man says and does.  If he isn’t satisfied that you can be trusted to carry on in his absence, I’ll have to be a rotten host and keep him at work.”

However irked she might have been by Bozal’s lack of faith in her abilities, she slid her eyes toward the archivist in a way that harbored no animosity; quite the reverse.

Bozal seemed not to notice.  Still holding the large flat can, he turned to the archivist.  “Is there anything you need that you didn’t bring?”

“Depends on what condition the film is in.  I have a kit in the car, but if the integrity is compromised in any way, I wouldn’t take a chance on screening until the techs have had a chance to examine it back at the lab.”

“’Compromised.’  The way you guys talk.  You’d think it’s a dame instead of a movie.”  Bozal chuckled.  “No vinegar stik, no yellowing.  A little rust inside one of the original cans, so I had the reels taken out and put in these.”  He thumped the can, which was made of brushed aluminum and rust-proof.

“How about the reels?”

“You tell me.  I wouldn’t let anyone unwind and rewind the stock onto fresh ones except an expert.”

It was Valentino’s turn to smile.  “Someone’s been doing his homework.”

“Sure.  I didn’t just fall off the turnip truck.”

“Then I’m ready.”  Valentino slid a pair of latex gloves from his inside breast pocket.

There were five cans on the rack, each containing a reel.  Esperanza was a keen student and a fast learner—all the better for her tutor, who was relieved to break free of her spell early.  Throughout the lesson she stood closer than seemed necessary.

He wasn’t flattered.  There was something impersonal in her frank interest; calculating, as if she’d set herself a challenge, either to annoy the family patriarch or to win some kind of bet, perhaps only with herself.  No, there was nothing flattering about the situation.  He was spoken for, and had no intention of becoming a notch on someone’s belt.

If getting Grandfather’s goat was her purpose, it seemed to have failed.  He showed no interest in her behavior, or for that matter in the process of managing fragile film.  Valentino suspected he knew more about silver-nitrate etiquette than he cared to let on.

So why had he been so eager to invite the film archivist to this private premiere?  The man was (in a phrase borrowed from Kyle Broadhead) “a riddle wrapped in a mystery inside an enigma—with a chewy chocolate center.”

But this sense of unease fled before the prospect ahead.  This was how an archaeologist must feel upon discovering an ancient civilization long thought lost.  Descending the steps to the theater, he leaned heavily on the handrail; more so than his elderly host, whose gait remained steady.  Valentino had gone rubbery in the knees.

They took center seats facing the curtained screen.  Bozal tilted back the top of an armrest, exposing a row of switches and a gridded speaker.  “Refreshment?  Popcorn, a soda, something with more of a kick?  I like to match the drink to the movie, like the right wine with supper.  Rum with Fairbanks, champagne with Garbo, beer with Brando.”

Out came the porcelains.  “Scotch, straight up.”

“Still too early, but thanks.”

“You’ll never get to be as old as me if you don’t start pickling your innards.” He flipped a switch. “Sí, abuelo?” came a youthful male voice from the speaker.

“Can it, Eduardo.  You speak English better than all your teachers. Pour me a Dewars.”

Presently a trim, dark-complected boy of twelve or thirteen entered from the hall carrying a tall tumbler on a tray.  His blue-black hair was cut close to the scalp and he wore a white tunic buttoned at the shoulder over black chinos, orange Reeboks on his feet. Bozal scooped the glass off the tray and made a sort of magician’s gesture with his other hand.  A folded twenty-dollar bill had appeared on the tray.

When he’d left, Valentino asked the old man how many grandchildren he had.

“Eduardo’s a great-grandchild; and I don’t know how many of them there are either.”

“But you know all their names?”

Another switch spread the heavy curtains with a hum, exposing a high-quality screen wide enough to display Lawrence of Arabia in all its original glory.  He raised the top of the armrest on his other side and lifted a telephone receiver.  Valentino overheard  Esperanza’s voice.

“Cut the comedy and roll the film.”  He hung up and closed the armrest.  “You got any kids?”

“If you ever do, first time they tell a joke, smack ‘em in the kisser.”

“That sounds like something from a movie, but I can’t place it.”

“It’s in the second reel.  Shush, now.  If there’s one thing I can’t stand it’s mugs that yak during the movie.”

Bozal threw yet another switch.  The lights went down.  Valentino’s excitement level went up. 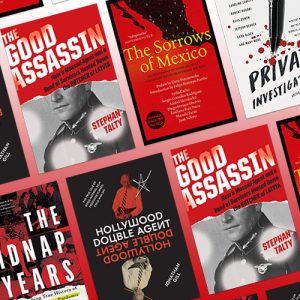 Five True Crime Books You Should Read This Month These are boom days for writers and readers looking for thoughtful, hard-hitting stories about real-life crime. Whether you’re...
© LitHub
Back to top