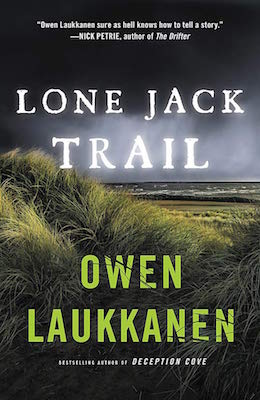 The following is an exclusive excerpt from Lone Jack Trail, by Owen Laukennen. Ex-Marine and now trainee sheriff's deputy Jess Winslow is stunned when a body washes ashore near Deception Cove, and it turns out that her boyfriend, ex-convict Mason Burke, was the last person to see him alive.

What remained of “Bad” Boyd washed up on the beach at Ship- wreck Point on a pretty morning in the middle of May, three days after anyone in Deception Cove last saw him alive. Those three days away hadn’t been kind to Boyd, and neither had the Pacific Ocean; the crabs had taken to the body by the time Cable Proudfoot and his grandson stumbled across it, nibbling away at what was left of Boyd’s once-famous good looks.

Cable spotted the body before his grandson did, and for a split second that stretched to a couple of minutes, he debated with himself whether to just turn the kid around and walk in the other direction, down the mile or so of empty, windswept shoreline until the corpse was out of sight, pretend like he hadn’t seen it, and spend the day digging for clams and exploring the tide pools, searching for sand dollars as planned. He didn’t get to spend much time with his daughter’s boy, not now that they’d moved to Port Angeles, and Cable was hoping to make the most of it: the first beach day after a long, dreary winter, then Tim Turpin’s signature fried halibut and chips at Spinnaker’s in Deception Cove, and maybe an ice cream cone from the dairy bar back on the reservation in Neah Bay. Heck, he’d been looking forward to this day since the rains started, last November.

But the grandson was seven, and the grandfather nearly seventy, and it didn’t take the kid long to grow bored with the rock crab he’d captured by the tide line, to look up and hurry after Grand-pop, catch up with him and follow his eyes twenty yards ahead to the wet, stinking mound of seaweed and torn clothes and ruined flesh, surrounded by waves of hardy flies and tenacious crabs and even a few lingering seagulls— the whole tableau unmistakable, even to an old man and a little boy, as anything but human remains.

The boy saw the body. The boy began to cry. The boy knew, and Cable kissed any notion of fish and chips and ice cream goodbye.

Cable put the boy in the back seat of his truck and tried to speak calm and reassuring things as they drove away from the beach. There was no point in calling the police; cell service was spotty out here, on the cusp of the Olympic Mountains amid towering, second-growth timber. It would take just as long to find a signal as it would to drive the highway back to Deception Cove and inform the deputies in person.

The road wound through the trees and along the shoreline, and Cable drove the speed limit. There was no sense in hurrying; the body would stay dead, and the tide wouldn’t rise high enough to claim it back again for hours. Soon, the forest widened into open space, and then he passed the gas station and Hank Moss’s motel, and he turned north, down the hill on Main Street toward the ocean again and town, the boy in the back seat saying nothing, watching the world pass by his window, swinging his legs and humming softly to himself.

The Makah County sheriff’s detachment in Deception Cove sat in a squat, one-story building at the foot of Main Street, overlooking the government wharf and the little harbor beyond, the open strait beyond that, and Canada beyond all. Main Street was quiet, and there were a couple of vehicles parked in front of the detachment, a Makah County SUV and a black, two-door Chevy Blazer. Cable parked beside the Blazer and rolled down the windows partway for the boy, told him he’d be right back and don’t try and wander off anywhere.

A young Makah man in a deputy’s uniform that might still have had the tags on it sat at the desk inside the detachment doors; Cable recognized him as Lily Monk’s boy, Paul, and wondered at  how the child had grown up so fast. Although maybe Paul hadn’t quite fully grown yet. The rookie deputy blanched as Cable explained the situation, barely waiting for Cable to finish before he craned his neck toward the rear of the detachment and called out Jess Winslow’s name. Cable watched Jess come out of a private office in the back and figured it was probably better that she take a look at the body anyway, figured Paul Monk could probably use a little more breaking in before he had to deal with this kind of thing.

Jess looked healthier than the last time he’d seen her, before all the trouble with Deputy Kirby Harwood and his buddies. She’d put on some weight, like she’d finally remembered to eat something now and then, and she didn’t look quite so pale, so haunted in the eyes. She listened to Cable, squared her shoulders and nodded, dug in her pocket for her keys, and told Monk to call the county coroner and tell her to meet Jess at Shipwreck Point. Monk picked up the phone as Cable turned to walk out to the vehicles and his grandson, and Jess looked back toward the private office and gave a whistle. Shortly, Cable heard a chain jangle and some kind of shake, and then the black-and-white dog ambled out of the office, sixty-odd pounds of pit mix and muscle, stretching and blinking like she’d just woken up from a nap.

“Come on, Lucy,” Jess called, and the dog shook herself one more time and walked over lazily. Jess clipped a lead on her and told her she was good, and then she straightened and met Cable’s eyes. “We’ll follow you out there, okay?”

Cable watched the deputy in the rearview mirror of his truck as he led her county cruiser back out toward Shipwreck Point. He’d forgotten about Lucy the dog, some kind of rescue, a “companion animal,” he’d heard, prescribed by the VA docs to help Jess deal with what she’d been through overseas. Cable looked at the dog— tongue lolling out the passenger window, enjoying the sunshine and the spring air— and wondered if he ought to have driven the extra few miles into Neah Bay, talked to the sheriff himself, wondered if another body might not send Jess Winslow back to the dark places, whatever she’d endured as a Marine that had scarred her so bad.

But he remembered how she’d been in the middle of the trouble with Deputy Kirby Harwood, how the dog had been there too. If she’d come through that strong enough that the new sheriff saw fit to deputize her, well, hell, maybe that dog was just her good buddy at this point and not some kind of mental-health necessity.

The parking lot at Shipwreck Point was still deserted, and Cable parked his truck where he’d parked it before, killed the engine, and climbed out and stood beside his door and watched as Jess pulled the cruiser in beside him. She got out of the cruiser, and the dog tried to follow, but Jess closed the door first, circled  around to Cable’s side, and Cable pointed through the trees and back east toward Deception Cove.

“A couple hundred yards that way,” he told her. “You can’t miss it. If it’s all right with you, I’ll stay here with my grandson.”

Jess looked past him at the boy in his car seat in the back of the truck, and her mouth twitched and she nodded.

“You’ll tell the coroner where to find me when she gets here?” she said.

“I will,” Cable said. “Are you going to need me to give a statement?”

She shrugged. “Not sure yet.” Then she looked out through the trees and toward the water. “You get any sense who it might be?”

“Didn’t get close enough to tell,” Cable said. “I didn’t really want the boy to see any more than he already had.”

“Yeah, okay.” Jess started down the trail toward the beach. “I guess we’ll find out soon enough, anyhow.”

Cable waited, listening to the sound of the breakers crashing onto the beach and across the black jagged rocks that bordered the sand, and the wind in the trees and the gulls and a raven overhead. After a while he opened the back door of the truck and let the boy out of his car seat, and together they stood in a patch of sunlight and smiled at the dog in the passenger seat of the cruiser.

Jess returned, slogging up through the sand to the dusty parking lot with a grim look on her face.

“Maybe sit the kid down in the truck again, Cable,” she said. “I’m going to need to take your statement after all.”

The boy, once freed, would not go back easily until mollified with a book and a hunk of a candy bar. Then Cable returned to the front of the truck, where Jess waited with weary eyes.

“That’s Brock Boyd down there,” she told him, and she shook her head slightly and kind of smiled, though the smile was hollow and there was no humor in her words. “And judging by the hole in his head, Cable, I’d say he’s been shot.”

James Lee Burke on Art, Fascism, and the Hijacking of American Christianity 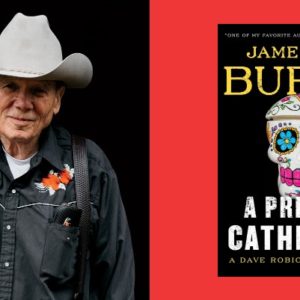 James Lee Burke on Art, Fascism, and the Hijacking of American Christianity The artist who can offer a moment of transcendence exists in the rarest category of human creativity. They enchant us with...
© LitHub
Back to top