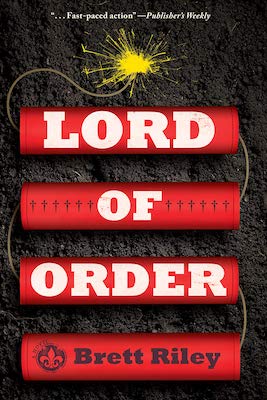 The following is an exclusive excerpt from the gritty new dystopian novel Lord of Order, by Brett Riley, about several rebels who attempt to keep New Orleans free from the dangerous theocracy that has overtaken the rest of the United States.

The man stood on the crumbling road. Green grass grew through its many fissures. Old, faded symbols with long-forgotten meanings stretched into the distance down its center and near its edges. To the man’s right, the boy rubbed his eyes, blond hair tousled and pillow-matted. He stood nearly as tall as the man, his father, though he had not yet seen twelve summers. To the left, the girl shielded her face against the rising sun, her curly red hair billowing in the breeze. Soon they would follow the road down the hill to the graveyard where, among monuments great and small, dew sparkled on the grass, though not for long; the air already felt warm. A scorching late June, portending a July that would fell strong men in their fields. But not yet. First came the telling.

The man embraced the children. The girl laid her head against him. Below them, the meticulous workers cropped the graveyard grass with handheld shears and their own sweat, dumping the detritus into cloth bags. When the sacks were filled to bursting, the landscapers tied them with heavy string and left them behind. Several dotted the ground like mottled warts.

Other workers scrubbed the monuments with horsehair brushes and water from barrels in horse-drawn carts. The clean stones marched outward in neat, straight rows. In some sections, marble gave way to wooden crosses. Unless the history books were wrong—always a possibility, given how long they had been banned, how nameless heroes hidden in darkness and damp had extended them with cramped and often near-illegible handwriting on flimsy parchment—the cemetery had once been reserved for the honored dead of a great army serving a country called the United States of America. Now, even the word country sounded archaic. Countries existed only in books and tales told around hearths. Generations ago, the Cult had risen, blasting old Earth and its ways into scree on which nothing could find purchase.

But all that was already known. The children had come to learn something both more and less than the wide world’s story.

The girl fidgeted. Sweat gleamed on her freckled face. The boy stood as still as stone, but he was older. Only weeks ago, he had come to the man with questions about how things came to be. By custom, the man was bound to answer. So here they were.

We’re looking for a grave in the very back, the man said. The workers won’t reach it until dusk. Perhaps even tomorrow. Gather your packs and follow me.

He grabbed his poke from where it lay at their feet. Like his father before him, he had packed it with full canteens and jerky and a single blanket, the barest of provisions.

The boy and girl shouldered their own packs, and the three of them set out. Soon enough, they could not avoid stepping on graves, but they did so with their heads bowed, silent. Sooner or later, everyone returned to the earth.

They walked until the children’s breath tore in and out of their lungs, until they grunted with every step, until sweat soaked their hair. The man seemed oblivious to their struggles. The children did not cry out or complain.

Finally, the man followed a row of sturdy white wooden crosses. The grass grew midcalf high. The cemetery’s rear border was lined with thick foliage, as if it were the edge of the known world. Near that tree line, one cross stood three times as tall as the others. This grave had been tended even as the others grew their green beards. Surrounded by the lush blooming whites and purples of dogwood and crepe myrtles, the cross was made of polished stone the bleached color of desert sand. It had been festooned with flowers now in various stages of decay—red roses shriveling against the base, orchids and lilies lying wilted and desiccated. The man stopped before this monument.

He took off his pack and spread their blanket over the grave and sat cross-legged, back straight, the pack beside him. He motioned to the children. They unshouldered their burdens and sat, one near each of his knees in the shadows of the trees and the cross. The man closed his eyes for a moment and gathered his strength, knowing the tale would be long and the telling hard. But it was his duty, and he had never shirked duty in his life.

He opened his eyes and said, We come to celebrate what is and mourn what was. Here, we acknowledge the growth of your bodies and your minds. Here, you learn where you come from and who you are. You must remember what I tell you today for the rest of your lives. I’ll not tell the tale again, and one day, you must come to this place and tell it to your own children. That is your charge. Take this greatest of all gifts—knowledge—and pass it on in your turn, and you will perpetuate all that is good in the world. You will stand vigil against the vile, the destructive, the cruel and merciless. There is nothing more at stake today, and nothing less. Do you understand?

The children nodded, solemn, eyes wide. Crickets struck up their low, buzzing orchestra. The sun trekked across the sky. The Earth turned. And the man began his story.

What the Devil Knows 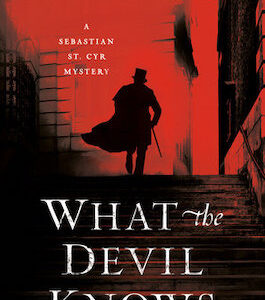 What the Devil Knows Saturday, 8 October 1814 Molly Maguire hated the fog. Hated the way it reeked of coal smoke and tore at her throat. Hated...
© LitHub
Back to top