What the Devil Knows 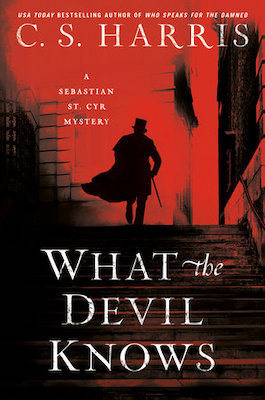 The following is an exclusive excerpt from What the Devil Knows, by C.S. Harris. It's October, 1814, and Sebastian St. Cyr finds himself investigating a string of horrible murders that bear resemblance to the horrific Ratcliffe Highway murders from 1811.

Molly Maguire hated the fog. Hated the way it reeked of coal smoke and tore at her throat. Hated the way the damp, suffocating blan­ket could turn even the most familiar lane into something ghostly and strange.

It was always worse at night, when the temperature plummeted and folks lit their fires. That’s when the mist would drift up from the docks, swallowing the dark hulls and tall masts of the big ships at anchor out on the river and creeping along the mean streets and foul alleyways of the part of East London known as Wapping. Sometimes Molly would dream of a different life, the life she’d once known, when cold, wet nights were spent safe and dry in a warm, gently lit cottage. But that life belonged to the past. In this life Molly walked the streets at night.

She’d been on her own since before she turned thirteen, and she told herself she should be used to it by now. Yet after three years, she still shrank from servicing men with foul breath and rough hands and urgent, rutting manparts. It didn’t hurt anymore like it had at first, at least not usually. But Molly still hated it even more than she hated the fog.

The bell in the clock tower of St. George’s‑in‑the- East struck mid­night, the dull clangs sounding oddly loud in the dense fog. If business had been good, Molly would have given up and gone back to the small, wretched room she shared with five other girls. But she was desperate for money. It might be Saturday night, but the fog had driven most po­tential customers off the streets. She’d had a couple of drunken seamen who took turns on her, one right after the other, then demanded a dis­count. But even they weren’t as bad as the fat old magistrate who’d pinned her against one of the looming towers of St. George’s.

A man like him, he could’ve bought himself a fine piece of Haymar­ket ware and tumbled her in the back room of a Covent Garden coffee­house. Instead he’d picked up a cheap little Wapping doxy and taken her up against the soot-stained old stones of the church, his big hands tear­ing at her bodice and painfully squeezing her breasts as he thrust into her hard enough to make her wince. She could still smell the stink of his spilled snuff and fine brandy clinging to her. And when it was all over and she’d asked for her money, he’d laughed at her.

“I don’t pay whores,” he said, buttoning his flap over his ponderous gut.

“Whaaat?” she’d wailed. “What you think? That I did this because I—”

He backhanded her across the mouth, splitting her lip against her teeth. “Consider yourself fortunate that I’ve decided not to have you committed.”

“Fat old wagtail,” Molly muttered now to herself. It felt good, saying it out loud, so she said it again. “Fat old wagtail. Should’ve lifted his bloody watch, that’s what I should’ve done. He owed me, he—”

She broke off as a dark, bulky shadow emerged from the fog swirl­ing up near the corner. Probably old Ben Carter, she thought. She’d al­ready tangled with the watchman once tonight and was in no mood to deal with him again. The black mouth of a noisome alley yawned beside her, and she ducked into it, gagging as the stench of rotting fish heads, rancid cabbage leaves, and what smelled like raw entrails enveloped her. She had her head turned, looking anxiously over her shoulder for the watchman, when her foot caught on something and she pitched forward.

“Mother Mary and all the saints,” she swore softly as she came down on what felt like a big overstuffed sack. Her outflung hands slid over warm, smooth cloth and something else. Something wet and sticky.

Rearing back with a gasp, she stared down at the man before her, at the familiar greatcoat with silver buttons, at the hideous yawning wound in that fat neck, at the fine once- white cravat now soaked dark with blood. More blood matted his bushy gray hair and swooping side- whiskers. She sucked in a quick breath and smelled him, smelled the brandy and the snuff and the blood.

A scream rose in her throat, but she choked it back. In her mind she was screaming, screaming over and over again, her heart pounding in her chest. She heard the sound of heavy approaching footsteps and threw a panicked glance back at the mouth of the alley in time to see Watch­man Ben pass with his lantern.

“Twelve o’clock on a foggy night and all is well,” he called.

She pushed to her feet, ready to run as soon as the watchman was safely gone. Then her gaze fell on the body before her, on the gold watch and chain spilling from that blood- splattered silk waistcoat, and she hesitated.

Molly might be a whore, but she’d never been a thief. Still, the man did owe her, didn’t he?

She told herself he owed her. 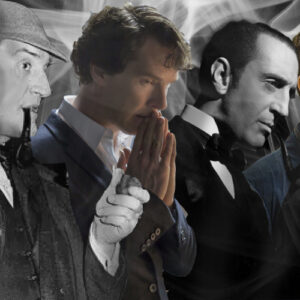