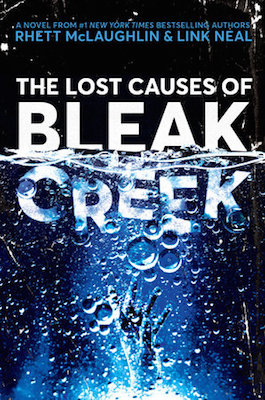 The following is an exclusive excerpt from Lost Causes of Bleak Creek, by Rhett McLaughlin and Link Neal. The Whitewood School is a notorious institution where unruly teens are sent for permanent reform. Regardless of the many suspicious deaths there over the years, the school has an incredible record. Rex and Leif are two teens behind an accident that sends their best friend Alicia to Whitewood. And they realize they should believe the sinister rumors about the school and get her out.

“Well, boys,” Steve McClendon began, “I think we all know why you’re here.”

Leif and Rex sat in the two formal high-backed chairs in the McClendon living room. Rex’s parents, along with Leif’s mom, Bonnie, were lined up across from them on an antique wood-trimmed couch. Leif figured that the impending discussion would not be pleasant, as he’d only seen Rex’s mother let two types of people sit in her living room: out-of-town guests she was desperately trying to impress, and children she was desperately trying to discipline.

“Yes, sir,” Rex replied, which Leif quickly repeated. Even though Alicia had been the one who’d leveled

Wayne Whitewood, she wasn’t present. As usual, Rex’s parents had decided to treat the two boys as a unit, something Leif’s mom had passively accepted years ago. Leif had grown used to receiving whatever punishment Rex did, and he didn’t mind; enduring the same sanctions as his best friend somehow made them closer.

“What you two did,” Rex’s dad continued. “It was just so . . . disrespectful.” There it was. The worst offense a Bleak Creek youth could commit: failing to show proper reverence for the institutions the town held so dear. And, in a sick twist of fate, because their stunt had rudely interrupted a prayer during a pig pickin’, they had simultaneously dishonored the town’s most sacred deities, God and pork. Double whammy.

“I thought we raised you better than that,” Rex’s mom said, looking over to Leif’s mom, who put down one of the at-least-five-year-old Andes mints she’d picked up from the porcelain bowl on the coffee table. She nodded in an effort to lay on the collective condemnation.

“You did, Mom,” Rex offered. “It was really stupid. And I can promise you that it won’t ever happen again.” Leif signaled his agreement by assuming the most contrite posture he could, pressing his knees together and drawing his elbows to his sides.

“Well, it won’t happen again because I’m takin’ my camera back. Your dog movie is over,” Rex’s dad said.

Rex and Leif exchanged a look like they’d both been punched in the stomach.

“I was never comfortable with you makin’ a movie about a ghost in the first place,” Rex’s mom said. “There’s no such thing as ghosts. That stuff is demonic!”

“It’s just a movie, Mom. Please, please, please . . . don’t take the camera! We’ve been working on this all summer.” Leif thought Rex was going to cry, and figured it might help the cause.

“No, son. I’m sorry. You can finish it later,” Rex’s dad insisted. “Because, you know, your mother’s right,” he added, looking to his wife. “You’re starting high school. This is no time to be messin’ around with . . . demon stuff.” Leif doubted that Rex’s dad really thought PolterDog was Satanic, but figured he wanted to present a united parental front. “If you start behaving—not to mention begin puttin’ some of that movie energy into gettin’ yourself in shape for basketball tryouts—then maybe you can use the camera next year.”

Leif looked to Rex, who sat quiet, resigned that arguing further would only make things worse.

“And . . . we think you should take a break from spending time with Alicia,” Rex’s mom added.

“What? No!” Leif had planned to stick to nonverbal communication, but he couldn’t help himself. “It wasn’t even her fault! We’re the ones who made her run into Mr. Whitewood!”

“It doesn’t matter whose fault it is,” Leif’s mom said, breaking her similar practice of letting the McClendons do the talking. “Between hitting Mr. Whitewood and that . . . mannequin situation, she’s getting a bad reputation.”

“That’s right,” Rex’s dad said. “And you two are too. Would hate to have to bring the Whitewood School into this, but . . .”

Leif found himself short of breath. In all previous disciplinary episodes in this room, the McClendons had never mentioned the possibility of sending him to Wayne White- wood’s reform school. This was new. And terrifying.

Leif tried to steady his shaky knees as Rex began to speak again.

“Mom, Dad, Mrs. Nelson,” he said, making eye con- tact with each adult as he addressed them. “We know what we did was wrong, and we feel horrible about it. We’ll do whatever it takes to regain your trust. Even if that means not finishing PolterDog and never talking to Alicia again.” Leif nodded accordingly, though he was relatively certain his best friend was being strategic rather than sincere.

The Art of Interviewing Subjects—And Actually Getting To the Truth 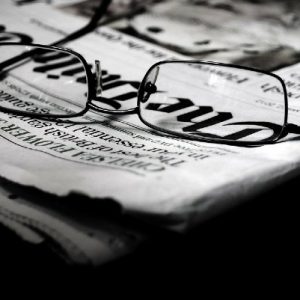 The Art of Interviewing Subjects—And Actually Getting To the Truth When I shifted from writing nonfiction books to novels, something unexpected happened. People began to be more inclined to tell...
© LitHub
Back to top