Love and Other Crimes

The following is an exclusive excerpt from the title short story in the new collection Love and Other Crimes, by Sara Paretsky, which includes two new tales about V.I. Warshawski.

“Fucking Warshawski snob,” she said. “I might have known. Like your mother, too good to walk around the planet with the ordinary mortals.”

“Anyone who compares me to my mother is paying me the highest possible compliment. But I still don’t—oh, Gregory? Baby Gregory? Are you Sonia Litvak?” She’d given her name as Sonia Geary when she made the appointment.

“I got married. Did you think that was impossible?” she jeered. She saw my inadvertent glance at her bare left hand. “It didn’t last. Neither did yours, what I heard, but you had to keep your own name, didn’t you? No one else could be as good as a Warshawski.” “Do you want to tell me who framed Gregory for what?” I asked.

“Or just needle me about my family?”

“I want you to understand I don’t need any Warshawski pity or handouts. I came here for help and I plan to pay your bill.”

“That assumes I agree to help you,” I snapped.

“But—you have to!” She was astonished. “You’re from South Houston, same as me. And I need a private cop to go up against the city, although come to think of it, your father was a Chicago cop and—”

“If you insult my father on top of my mother, you’ll have to leave.” “Oh, don’t get your undies in a bundle,” she grumbled. “I never

It was as close as she would come to an apology. I turned away to type Gregory Litvak’s name into a legal database, and he popped right up: charged with second-degree homicide along with criminal destruction of property. Ten days ago, someone—allegedly Gregory Litvak—had gone through the Roccamena warehouse and smashed about twenty-five million dollars’ worth of wine and booze.

Sonia was reading over my shoulder. “See, I told you—they framed him for this.”

“Sonia—this doesn’t prove anything about anyone.”

I scrolled down the screen. Roccamena had fired Gregory a week or so before the destruction. The state—and the liquor distributor—claimed he sought revenge by rampaging through the warehouse.

He might still have made bail, but the crime held a second, more serious offense: when the cleanup crew started hauling out the debris, they’d found the body of Eugene Horvath mixed in with the broken bottles in aisle ninety-seven. Horvath was Roccamena’s accountant; the state’s theory was that Gregory blamed him for losing his job.

“They fired Gregory for no reason,” Sonia burst out. “And then, because they feel guilty, they have to frame him for destroying the warehouse and killing Horvath. The Roccamenas probably did it themselves to collect insurance.”

“What made the police pick up Gregory?” I asked.

Sonia didn’t want Warshawski pity, and I didn’t want to give her any, so it annoyed me to find myself stirred by it.

She glared fiercely. When she’d been young, carting baby Gregory around, her hair grew in lopsided clumps around her head, as though she got her brother Donny to cut it for her. Today the thick curls, dyed bright orange, were symmetrically shaped. Her face was covered with the armor of heavy makeup, but be- neath that, she was still the ungainly, needy girl of fifteen.

Sonia didn’t want Warshawski pity, and I didn’t want to give her any, so it annoyed me to find myself stirred by it.

“The public defender. We’re trying to put the money together for a real lawyer, but we can’t even make bail right now. They set it for two million. Who can come up with that kind of money? Reggie could help, but he won’t. Taking his brats to Disney World instead of taking care of his own flesh and blood.”

I didn’t think suggesting that his children were also Reggie’s flesh and blood would help. Instead, I laboriously pried details from her. Reggie had moved to Elgin, with his own little company. Sonia was vague about what they did, but it had something to do with computers. She seemed to think Reggie had become another Gates or Jobs, and that he wouldn’t help Gregory out of spite.

Donny worked for Klondike insurance. This was an agency that had the inside track on a lot of city and county business, which somehow, inevitably, also seemed to mean some of their clients were Mob fronts. It sounded as though he was the agency’s handy- man, repairing broken machines, changing lightbulbs, ordering supplies. I could picture him siphoning off supplies and selling them on Craigslist, but not engineering the big deals that make a successful mobster.

“So it’s not like Donny’s got a lot of money,” Sonia was continuing to whine, “and then his ex is sucking the marrow out of his bones. He doesn’t even get to see the kid except weekends and then the kid doesn’t want to hang around Donny because Donny doesn’t have a PlayStation or any of that crap.”

“He dropped all the way out.” Sonia snorted. “First he was in business with Reggie, but he said late-stage capitalism was drain- ing his lifeblood, whatever the fuck that means. He lives in a cabin in the hills somewhere in Arizona and thinks great thoughts. Or maybe it’s no thoughts.”

“Gregory is super smart,” Sonia said. “Like, he had really high ACT scores, so Daddy wanted him to go to college. He even got a scholarship to go to the University of Illinois, but then he never went. So Daddy threw him out of the house, which was when I was married, and he lived with me, then Ken threw him out, which led to me beating Ken up and him getting an order of protection and then a divorce. Anyway, that’s when Donny found Gregory a job at Roccamena’s, and he’s been there ever since. Until they fired him for no reason at all.”

“They must have told him something.”

She tossed her head, but the orange curls didn’t move. She must have sprayed some kind of epoxy on them.

“Ask him yourself. Maybe you can turn on some Warshawski charm and he’ll tell you stuff he won’t talk to me about.”

The chin beneath the thick makeup wobbled; she fished in her handbag and blew her nose, a good loud honk. “You going to help me or not?”

Not, I chanted silently. Not, not, not.

So why did I find myself printing out a copy of my standard con- tract for Sonia? I thought when she saw my fees and the nonrefundable deposit she’d walk out, but she signed it with every appearance of nonchalance, counted out five hundred dollars in twenties, and swept from the office. Sort of. She was wearing a sweatshirt that proclaimed her attachment to Liggett Bar and Grill’s Slow Pitch team; the sleeve snagged on the lock tongue on her way out and she had to stop to pull it free.

Even the cockiest gang members look wilted after a week at County, and Gregory Litvak hadn’t been cocky to begin with. Like all the Litvaks, he was short, with wide shoulders and a mass of wiry curls. Unlike his siblings, he sat hunched on his side of the table, looking at the floor.

I hadn’t seen him since he was a baby, seemingly glued to his sister’s hip, but when the guard brought him into the room for lawyers and clients, I recognized him at once.

“I used to live up the street from your family,” I said, to break a growing silence. “I sold my house when my dad died. Are you still in South Chicago? ”

“I, uh, moved,” he mumbled, without looking up. “After Karen and Arthur died. Over to Fernwood. Sonia and Donny, they found me a place.”

It took a minute for me to realize Karen and Arthur were his parents. “Did Sonia tell you she’s hired me to find evidence to exonerate you?”

His thick neck bobbed fractionally. He’d been shifting boxes of liquor at the Roccamena warehouse for the best part of twenty years; his broad shoulders were also heavily muscled. I could see him easily bashing—but I was on his team. Put those thoughts firmly away. Anyway, he wasn’t a fighter: the bruises all over his face and arms showed that he was easy prey in the halls and exercise yard.

“Sonia says you didn’t do it.”

“I didn’t.” His voice, even in protest, remained a monotone. “It sounds awful, what happened, but I didn’t see it. I didn’t do it.”

He looked up for a second. “They showed me pictures. But I didn’t see it happen. I don’t know who did it.”

“Do you have an alibi for the night?”

“I live alone. I guess you could ask Gattara.” He gave a bark of unhappy laughter. “That’s my cat. It’s the name of a wine we—they sell. It has a cat on the label.”

“Donny says you do have an alibi.”

“He told me,” Gregory said, listless. “I don’t know what he’s talking about. I guess he thinks he can rescue me. Him and Sonia, like they’ve always done.” His voice trailed away.

Counting Down the Greatest Crime Films of All-Time: #11 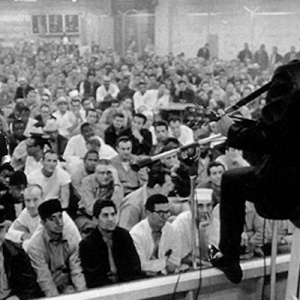 Let It Bleed: Anti-heroes at the crossroads of crime fiction and popular music “When in doubt have a man come through a door with a gun in his hand.” Swap “gun” for “guitar” or “microphone”...
© LitHub
Back to top