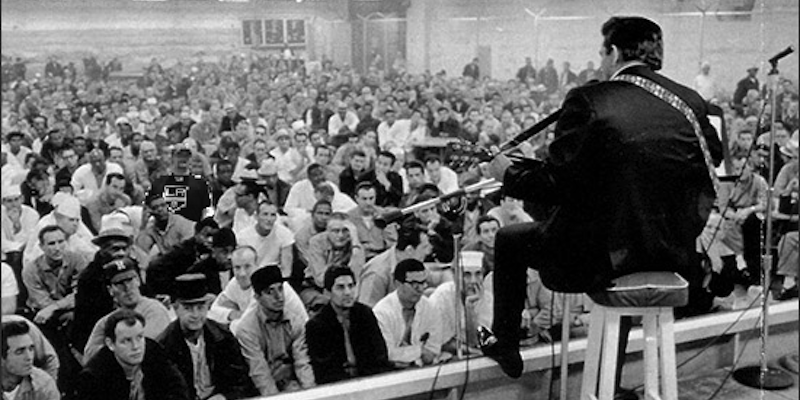 The history of music is full of outlaws and criminals, killers and their victims, shady dealers and backstage dreamers...

“When in doubt have a man come through a door with a gun in his hand.” Swap “gun” for “guitar” or “microphone” in Raymond Chandler’s famous quote about writer’s block, and the advice still works. Likewise, this quote from Rage Against The Machine guitarist, Tom Morello, could easily apply to crime fiction: “Music, I think, is best when it honestly explores personal demons, and it stirs around in the silt of the psyche to find out what’s really there.”

I’ve always thought the music industry was fertile ground for crime fiction. The huge egos, big paydays, drug- and alcohol-fueled psychoses, and shady back room deals lend themselves to the hard characters, bad choices and tough situations that propel the darkest plots. But first let’s agree on a definition for crime fiction—I like this one: “The greatest crime stories deal with a moral accounting on the part of the hero for his entire life, or provide some new perspective on the tension between society and the individual,” author David Corbett wrote in his Writers Digest article, “The Difference Between a Crime Novel, Mystery Novel and Thriller Novel.” (This succinct Keith Richards quote from his autobiography, Life, seems like the perfect call and response to Corbett’s sentiment: “If you’re going to kick authority in the teeth, you might as well use two feet.”).

It’s undeniable that the history of popular music—like the best crime novels—is populated by anti-heroes. From the moment early icons like Little Richard, Chuck Berry, Elvis Presley, and Jerry Lee Lewis hit the mainstream, rock stars have been synonymous with juvenile delinquency and outsider culture. A handful of those early rock and rollers actually embraced the criminal lifestyle (Lewis earned the nickname “The Killer” for a reason), while many more exploited the myth in the name of fame and riches. Devoted fans have been trying to separate the facts from the fiction ever since.

It’s undeniable that the history of popular music—like the best crime novels—is populated by anti-heroes.

But those early rock stars (and their pop progeny) didn’t come up with this anti-authoritarian image on their own. Unlike the murky origin story of crime fiction—which many believe crossed into the mainstream during the mid-1800s with authors like Edgar Allen Poe and Arthur Conan Doyle—the history of modern music is much easier to trace. Start with immediate predecessors like Sister Rosetta Tharpe, Jimmie Rodgers and Fats Domino, and all roads quickly lead back to rhythm & blues, boogie-woogie, folk, jazz and (perhaps most importantly) blues. This is where we catch a glimpse of early anti-hero archetypes, in the Faustian myths of Robert Johnson and the violent reality of Lead Belly. A hundred years later, their musical offspring still exist somewhere between those two extremes. “That’s why I love being in rock ‘n’ roll. It’s a whole life thing. You’re not a rock ‘n’ roll person four hours a day or even when you’re on stage. It’s become the rhythm of your whole life,” Patti Smith told Interview magazine in 2015.

Johnny Cash hit his “Man In Black” stride in the ‘60s, eventually releasing Johnny Cash At Folsom Prison toward the end of the decade and turning his 1955 song “Folsom Prison Blues” into a Top 40 hit (featuring one of the best crime fiction lyrics of all time: “But I shot a man in Reno, just to watch him die”). Meanwhile, girl groups glorified bad boys with songs like “He’s A Rebel” by The Crystals, and “Leader Of The Pack” by The Shangri-Las (“They told me he was bad, but I knew he was sad”). The same decade gave us Richards (incredibly, only the second most rebellious Rolling Stone behind self-destructive multi-instrumentalist, Brian Jones; the band’s 1969 album is the title of this essay), John Lennon, Lou Reed, Ike & Tina Turner, Keith Moon, Jim Morrison, Janis Joplin, Jimi Hendrix and Iggy Pop.

The outlaw musician image evolved and expanded in the ‘70s with artists like Suzi Quatro, Bob Marley, Joan Jett (although it was Runaways drummer Sandy West who later did jail time), Ozzy Osbourne, Alice Cooper, Johnny Paycheck and Sid Vicious. Punk, New Wave, Heavy Metal and Hip-Hop broke into the mainstream in the Parental Advisory ‘80s, giving us acts ranging from Black Flag to Motley Crue, Rick James to Steve Earle, The Plasmatics to NWA. The ‘90s were ushered in by the dysfunctional king and queen of grunge, Kurt Cobain and Courtney Love, pinballed stylistically mid-decade from Rage Against The Machine and Wu-Tang Clan, to TLC and Sublime, and closed out with the Shock Rock and Nu Metal of Marilyn Manson and Korn. The list goes on and on into the 2000s, from Amy Winehouse to Lil Wayne and beyond.

The combined rap sheet for some of the artists mentioned above would include everything from public intoxication, public indecency and weapons possession, to assault, battery, and (in the case of Sid Vicious) murder. But the Sex Pistols’ bassist isn’t alone when it comes to murderous musicians. Jim Gordon, a famous session drummer and member of Derek and the Dominos, killed his own mother during a schizophrenic episode in the early ‘80s. Motley Crue lead singer, Vince Neil, was convicted of vehicular manslaughter after a drunk driving accident resulted in the death of Hanoi Rocks drummer, Razzle, in the mid-‘80s. Norwegian black metal musician, Varg Vikernes, served a 15-year prison sentence for arson and murder in the ‘90s.

It’s a ghastly list, for sure, but criminal activity in the music industry certainly isn’t confined to performers. Elvis Presley’s manager, Colonel Tom Parker, has become shorthand for exploitative and predatory business practices in the record business, but many followed in his footsteps. Like great white sharks attracted to blood in the water, career criminals and grifters have always found safe haven and illicit profits in popular music. Some of the most often repeated tales include Alan Freed, an early rock and roll DJ who became the face of the late-50s “payola’ scandal that shined a light on music industry corruption; Small Faces manager, Don Arden (aka “the Al Capone of pop,” and father of Sharon Osbourne), who famously had his goons dangle a competitor from a fourth floor balcony over an artist dispute; songwriter and producer, Phil Spector, who invented the “Wall of Sound” with acts like The Ronettes in the ‘60s, was found guilty of murdering actress Lana Clarkson at his home in 2003; and Hip Hop impresario, Suge Knight, who pled no contest to voluntary manslaughter in 2018.

Music’s crime streak also extends to the fans. Nowhere is this better represented than Charles Manson, a frustrated musician and Beatles fanatic (see “Helter Skelter”) who became one of the most notorious cult-leaders and mass murderers in U.S. history. Prior to orchestrating the Tate-LaBianca murders around Los Angeles in 1969, he befriended Beach Boys drummer, Dennis Wilson, who convinced his already legendary band to record Manson’s song “Cease To Exist” (retitled “Never Learn Not To Love,” and released without a Manson songwriting credit).

When it comes to killing sprees connected to music, Manson is not alone. LA-based serial killer Richard Ramirez (aka “Night Stalker”) was forever connected to Australian rockers, AC/DC, after leaving a hat bearing their logo at one of his murder scenes in the mid-‘80s. Similarly, shock rocker Marilyn Manson became a self-described “media scapegoat” in the wake of the tragic Columbine High School massacre in 1999. “America loves to find an icon to hang its guilt on. But, admittedly, I have assumed the role of Antichrist; I am the Nineties voice of individuality, and people tend to associate anyone who looks and behaves differently with illegal or immoral activity,” Manson wrote in Rolling Stone.

Tragically, some artists become the victims of violence themselves. John Lennon was gunned down outside his New York apartment building in 1980 by a disgruntled Beatles fan. Soul musician, Marvin Gaye, was shot and killed by his father during a domestic dispute in LA in 1984. Reggae star, Peter Tosh, was shot and killed during a robbery at his home in Jamaica in 1987. Mia Zapata, of The Gits, was brutally murdered in Seattle in 1993. Former Pantera guitarist, “Dimebag” Darrell Abbott, and three others were shot and killed at an Ohio nightclub by a deranged fan in 2004. Sadly, the drug overdoses, suicides, and car, bus and plane crashes are too numerous to list.

Given this pronounced dark streak, it’s no wonder so many authors use music as the backbeat for their crime fiction.

Given this pronounced dark streak, it’s no wonder so many authors use music as the backbeat for their crime fiction. Jo Nesbo is best known for his Harry Hole series, including The Redeemer, The Devil’s Star, The Snowman and Police, but he’s also the lead vocalist and guitarist for the pop rock band, Di Derre. Makes sense that his bedraggled, alcoholic detective is also a music lover. Scottish crime author, Ian Rankin—himself the lead singer for the band, Best Picture—also imbues his beloved character, Inspector John Rebus, with a passion for music ranging from classical to indie rock. New York author, Charlotte Carter wrote a series about jazz saxophonist, Nanette Hayes, and, of course, Michael Connelly’s Harry Bosch is a jazz aficionado. Texas musician Jesse Sublett published a series about blues musician, Martin Fender, and San Diego-based author, Corey Lynn Fayman, wrote the Rolly Waters PI series about a guitarist. The list goes on and on. There is even a crime fiction super group called Fun Lovin’ Crime Writers featuring authors Mark Billingham, Val McDermid, Chris Brookmyre, Stuart Neville, Luca Veste and Doug Johnstone.

In addition, several music-themed crime anthologies have been published in recent years including Crime Plus Music: Twenty Stories Of Music-Themed Noir (edited by music critic, Jim Fussilli), Trouble In The Heartland: Crime Fiction Inspired By The Songs Of Bruce Springsteen (edited by Joe Clifford), and Mama Tried: Crime Fiction Inspired by Outlaw Country (edited by James R. Tuck). I have personally contributed stories to a few of these collections including the Anthony Award-nominated Murder-A-Go-Go’s: Crime Fiction Inspired By The Music of The Go-Go’s (edited by Holly West). More recently, my short story “Dead Beats” (about a murderous rock band, naturally) appears in the Rock-N-Noirror: Horror and Noir from the Seedy Side of Rock-N-Roll collection from 10th Rule Books. And my music-themed novelette, Good Girls Don’t: A Second Power Pop Heist, is available now on Amazon.

S.W. Lauden co-edited the essay collection, Go All The Way: A Literary Appreciation of Power Pop. His crime fiction novelette, That'll Be The Day: A Power Pop Heist, was released in 2019. The follow up, Good Girls Don’t: A Second Power Pop Heist, will be available June 29, 2020. His Greg Salem punk rock PI series includes Bad Citizen Corporation, Grizzly Season and Hang Time. S.W. Lauden is the pen name of Steve Coulter, drummer for Tsar and The Brothers Steve.

Love and Other Crimes 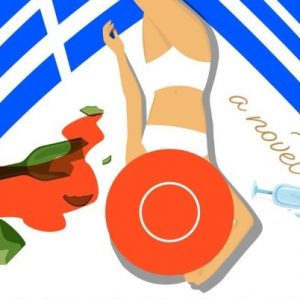 Another week, another batch of books for your TBR pile. Happy reading, folks. * Karen Robards, The Black Swan of Paris...
© LitHub
Back to top