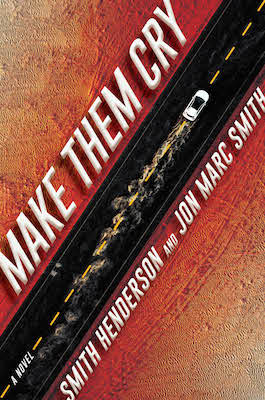 The following is an exclusive excerpt and cover reveal from Make Them Cry, by Smith Henderson and Jon Marc Smith, scheduled for release in September 2020 from Ecco Books. DEA Agent Diane Harbaugh heads to Mexico to investigate a black market. She discovers a horrifying conspiracy, and so enlists the help of jaded CIA agent Ian Carver. But it’s not long before they become the focus of an international manhunt, targeted by assassins, spies, and even the US Government.

Two motorcycles had pulled alongside them now, one on each side. One in front. She could hear the Toyota rumbling close by. Out of the corner of her eye, she saw Gustavo raise his pistol toward her. She instinctively leaned back, grabbed the barrel and as the motorcycles raced ahead again, saw his wild and bewildered expression and realized he’d been aiming out the window.

He threw open his door.

He seemed to consider the roadway blurring beneath him, the pistol in his hand.

He raised the pistol to his head.

She swerved the car suddenly to the right and caused the passenger door to swing shut, not of a desire to save his life or even to avoid something in the roadway. She had simply felt something. A startle from nowhere that made her yank the wheel before she realized that it came from between her legs: the phone. When it vibrated a second time, she picked it up and held it in front of her face. An UNKNOWN number.

“I’ve got eyes on you. You need to listen closely and we’ll get you out of this.”

“Are you the one driving?”

“Who is that?” Gustavo asked.

“Shut up,” she said, she couldn’t hear Carver talking. “Sorry, what did you say?”

“What am I supposed to do?”

The Toyota truck motor rumbling like the sound of a battalion behind them. The F-150. She couldn’t see any of the bikes.

“Can you see the bikes?” she asked.

Carver didn’t answer. Neither did Gustavo.

She thought she heard shouting, even over the traffic and the Toyota engine, and the sound of the F-150 peeling. The Toyota pulled to her right bumper.

“Who you talking with?” Gustavo asked again.

The Ford pulled up onto her right. She knew immediately that it was going to force her into the Toyota, edge her into the grill guard, and the two trucks would send the little sedan into sideways skid.

The Ford pulled up onto her right. She knew immediately that it was going to force her into the Toyota, edge her into the grill guard, and the two trucks would send the little sedan into sideways skid. She set the phone on the seat and gunned the gutless engine, but the Toyota matched her speed, stayed on her corner. The Ford squeezed over.

The Ford a few feet from her shoulder, her face. The Toyota on her ass. She tapped the brakes, the Toyota clipped her, braked and skidded. She wrenched the wheel right, swerved free and in front of the Toyota and sped on. The Ford hung up behind an old pickup in the right lane, the Toyota raced up on her rear. She reached over and grabbed the phone.

The bikes had appeared again, veering ahead and behind, not doing anything yet, waiting.

She looked down. UNKNOWN. She toggled to speaker, hit it.

“I’m here,” she said. “Forgot to put you on speaker. They were gonna run us off the road.”

“I missed the turn.”

There were coming up on a slow-moving van now.

“On my signal, pass this van on the right side,” Carver said. “Now.”

She accelerated in the non-lane between the van and the sidewalk, heard the whoosh of a motorbike’s evasion, and wished she’d knocked the motherfucker over. Tilting the wheel to the left, she cut in front of the van with very little to spare. The antenna in the air vent whipping around like trash in a tornado.

She pushed down the gas and the Hyundai did what it could, not much, but something.

“Go all the way to the left lane.”

She drifted over smooth and swift.

“When I say, you brake hard. We’re gonna pop you over the median.”

“You’re head back the other way.”

“Not quite yet, though. Get past these cars.”

Three vehicles in this lane. She caught and veered around them, and then cut back quickly. Behind her, squeal of tires, honking. The Toyota swerved. A horn. The Ford maybe. She sped up.

Gustavo had turned around, was looking out the back window.

“They gonna shoot,” he said.

Gustavo was blocking the rearview. She shoved him out of the way. She could make out the passenger in the Toyota leaning out his window, the unreal shape of a submachine gun. There was another car in the lane. She was heading straight for it.

Gustavo said something she couldn’t hear. She kept on right ahead, heading straight for the car less than fifty meters away.

She braked hard, spun the wheel and the car lurched up onto the grassy median, clipping a palm but bouncing through and across, skidding all the way into the far right north lane, facing back in the direction they’d just come from. Stopped. She watched in awe as the Toyota driver locked eyes with her going the other direction.

She shoved her foot on the gas, making sure not to hold the wheel too tight, let it find its own high-speed equilibrium.

The bikes leapt over the median in front of them, jarred their riders, swerved, some stalled as the sedan passed through them. And then already there was one outside Gustavo’s window, another buzzing around next to her, yet another right behind them. But she wasn’t scared anymore.

“Keep going,” Carver said. “You’re all clear ahead for the next little bit.”

“What about the bikes?”

“You’re gonna make the turn this time. Get ready.”

Holding the car steady she slipped around two cars and then got the car up to 110 kmh. When she heard the Toyota ’s engine loud and getting louder very quickly, she gripped the wheel tighter.

“The small pickup’s coming up behind,” Carver said. “Hang on. Don’t decelerate—”

A sudden crash threw them forward, her shoulder smashing into the wheel, the phone flying  onto the floorboard. The car swerved, she regained control, righted it. In the rearview the Toyota. Fucker had rammed her. She yanked her seat belt on. As did Gustavo. A wonder they hadn’t done so yet.

“The phone,” she said to Gustavo.

“The floor. The phone! We gotta make a turn. I need to know when!”

He unlatched his seat belt and bent to find it.

“It’s down near my feet!” she shouted. In the mirror she saw the truck coming hard. “Shit, get up!”

She shoved herself back into the seat again and braced as much as she could.

The blow pulled her into the seat belt, tight against her breastbone, she could feel her organs boucing as her head flew forward. The car wobbled and careened. Her vision blurred. She blinked and pressed the gas. Gustavo was gone.

“Take it!” he said from the floor, handing up the phone. He climbed back into his seat, pulling on the seatbelt.

She jammed the phone into her bra strap.

“You still hear me?” she said, turning her chin to the side.

“Keep driving. Stay in this lane. It’s not far.”

The Hyundai was still handling okay, but in the side mirror she could see a panel of the car’s tail razoring in the wind like a flame.

“We lost one the bikes,” Gustavo said. “And the Ford, tambíen, I dunno.”

“This car can’t take more hits like that,” she said.

“Just listen to me and drive,” Carver said.

She looked in the rear view. It was urging up on them again.

She braced—for nothing. The truck lunged and then it dropped back. A few seconds later, did the same thing. Sped up, got right on her tail, backed off.

“Okay, sure, no fucking problem.”

“Don’t brake until I tell you. Pass this car.”

She cut around the slow vehicle in front of her. She glided back into the center lane and accelerated. They were coming up on a light, changing, yellow, now red. She let off the gas. 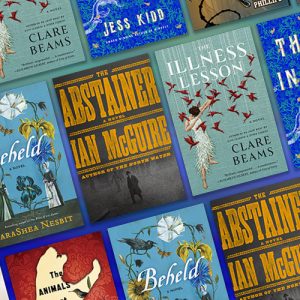 The Best Historical Fiction of 2020 (So Far) Historical fiction fulfills many needs in our lives. It educates us and entertains us, soothes us and challenges us. It can help...
© LitHub
Back to top