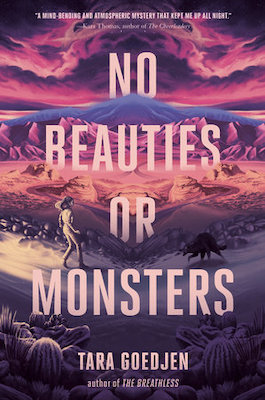 The following is an exclusive excerpt from No Beauties or Monsters, by Tara Goedjen. When Rylie and her mom return to Twentynine Palms in the Mojave Desert, the place where Rylie's dad died and her mysterious grandfather cut ties with them before he, too, passed away, she is unnerved to learn that one of her old friends, Lily, is missing. Not only that, but there are rumors of a killer roaming through the desert. But most unnerving of all are the horrifying visions she sees herself.

Her stepbrother’s voice isn’t as soft as the hypnosis record­ing, but when he counts down slowly—five, four, three, two, one—an image comes to Rylie: a boulder, gray in the moonlight. The one she fell from.

And then she’s back in the memory. It’s all coming back to her and she’s there, lying on the ground next to the boulder—rocks are digging into her arm from how she landed. She scrambles to her feet, feeling dizzy. A few feet away is a coyote, watching her. Another is at the edge of the boulder. They seem . . . especially large. Their paws look dark, almost cloven.

She crouches down and grabs a loose rock. Just in case. Then she steps back. Another step. She feels cold and slow on her feet, and she can’t see the trail.

One of the coyotes growls but doesn’t move. She tight­ens her grip on the rock. There’s a searing pain at her temples—she must have hit her head. A burst of heat light­ning flashes across the sky, lighting up the ground and the boulder she fell from. On its side is red graffiti: we enter the circle at night and are consumed by fire. Next to it is a drawing of something that looks like a star, or six long, razor-sharp petals surrounded by a circle. Above the circle is an arrow and the number sixteen, and it suddenly reminds her of something.

Her grandpa’s cabin—the number that’s etched into his door. The number sixteen. So the arrow . . . might be pointing toward it?

She raises the rock as she takes another step back. The coyotes aren’t following her. It’s fine; she’s fine. She turns, and a shadow flits past. At the edge of her vision, other shadows start to move, hunched things with too-big heads and shining eyes.

Oh God. She throws her hand over her mouth. Every­where, all around her, are yellow-green eyes.

There’s another burst of lightning, and then she’s run­ning, sprinting in the direction the arrow points. Overhead, more bright gashes tear across the sky. She gets a burst of speed, her necklace thudding against her collarbone, her breath ragged. It’s just ahead—her grandpa’s cabin. She hears a faint whistle, hears her name in the distance. Kai must be calling for her, Nathan too.

But she can’t see them, and the cabin is closer.

She keeps running, passes a gaping hole in the yard, comes up to the door. Reaches for it.

And then, all of a sudden, she stops.

She slowly turns around. Behind her is a girl covered in blood.

She blinks, rubs at her eyes. Her face is wet, her heart pounding. Kai’s hand is on her shoulder, and a gasping sound is coming from somewhere close.

“Deep breaths,” Kai says, and she realizes that her chest is heaving and she can’t get air. She leans forward, her whole body tense, desperate. It’s like she’s at a higher altitude, that’s all; it’s like she’s trail running up Mount Laguna, keeping a fast pace. I can do this; I can breathe. I can breathe. She stares down at the bandages on her arms until her lungs start to work, and then she shrugs off Kai’s hand.

“I’m fine now.” But she’s not; she feels like she did on the drive here when she thought she’d hit someone, and her shirt is drenched for some reason.

Her eyes narrow on the dog bowl that Kai’s holding. “You threw water on me?”

“You were doing this really freaky thing with your breath, and then when you started screaming—”

“Usually. Not now.” Kai shoves the hypnosis book at her. “Five percent of people are highly suggestible. You must go really deep, like you’re asleep or something. Dad will kill me if he knows we tried this.”

“That’s why we’re not telling him.” But it’s not Ben she wants to keep it from. It’s her mom.

“You were talking about coyotes, how they were every­where.” Kai picks up his guitar, absently runs his pick over it. The strings are out of tune. “I’m no wildlife expert, but I’m pretty sure coyotes don’t normally travel in packs. What do you think—”

“A panic attack,” Rylie says, sounding it out. “I saw two coyotes, and I panicked and thought there were more.”

It’s one explanation. There’s another one too. Dr. Singh told her that head injuries can cause visual hallucinations. But something else is bothering her about the hypnosis. Something Kai wouldn’t understand.

“And that graffiti on the boulder,” Kai says. “ ‘We enter the circle at night and—’ ”

“Hang on a minute.” Rylie pushes past him and heads into the bathroom. The front of her shirt is wet and stick­ing to her skin. In the mirror, the bruise on her forehead looks dark and tender, and she clutches the granite counter to steady herself. She feels dizzy. She feels like she did last night. Flashes of the hypnosis come back: the coyotes, the cabin, the hole in the yard, what she saw when she turned around . . .

But now she needs to go back to the cabin.

Excerpted from NO BEAUTIES OR MONSTERS. Copyright ©2021 By Tara Goedjen. Reprinted with permission of Delacorte Press. All rights reserved.

To Investigate Serial Killers with the FBI, First She Had to Pass the Test 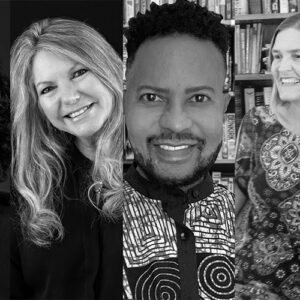