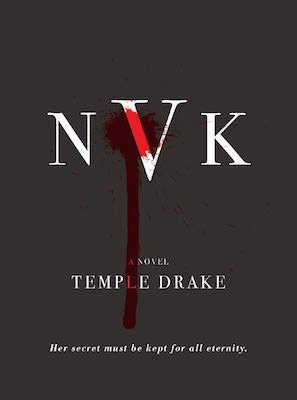 The following is an exclusive excerpt from NVK, by Temple Drake. Set in an alternative Shanghai, the novel follows a Chinese businessman named Zhang Guo Xing who meets a Western woman named Naemi Vieno Kuusela, who seems to be too alluring to be real. But as they fall in love, he begins to learn that she is not what she seems—and may not even be precisely human.

Once in the taxi, Naemi leaned forwards, her el­bows on her knees, her hands covering her face. She was sweating, and her brain whined and crackled like a radio stuck between stations.

“You’re not going to throw up, are you?” The driver was eyeing her in the rearview mirror.

He muttered a few derogatory words, then shifted into gear and pulled away from the hotel.

She hadn’t wanted breakfast in the first place, but Zhang had talked her into it. And it had gone well, she thought. Then, just as she was about to leave, she heard a name she hadn’t heard in almost half a century.

She corresponded to the memories they had of her—because she hadn’t changed at all.

If Torben hadn’t told her who he was, would she have guessed? She doubted it. Unless, perhaps, she had closed her eyes and listened to his voice, which was tentative and candid, exactly as she remembered it. To look at him, though? No. He was just a middle-aged man in a crum­pled beige suit. She had a sudden, sickening realization. The world was full of such people. Since they looked older, they could stand right in front of her, and she’d be none the wiser. It was as if they were in disguise. To them, though, she was instantly recognizable. She corresponded to the memories they had of her—because she hadn’t changed at all. Time had rendered her conspicuous, like a rock ex­posed by an ebbing tide, there for everyone to see.

She ought to have had a strategy in place, but she had been caught off guard. In a panic, she had done the only thing she could think of doing. She held on to the genu­ine bewilderment she had felt when he said, “Nina.” She pretended she had no idea who he was. Then she fled. Through the restaurant, down in the lift, and out into the sunlight, trembling…

The bars on Changyi Road slid by, their exteriors sleepy, shut-eyed, unsuited to the daylight. In her mind she traveled back to London. June 1974. She was in the Students’ Union with friends when a young man came over, an empty beer glass in his hand. He stood in front of her in his maroon velvet loon pants, his hair unfash­ionably short.

“They tell me you’re Finnish,” he said.

“Do they?” Her voice was lightly mocking, but she already knew that he posed no threat to her, and that she could be kind.

She lit a cigarette. “I’m from North Karelia, originally.”

“I was born in Helsinki.”

“Ah,” she said. “The sophisticated type.”

“What kind of Finn are you?”

He was joking, or half joking, but this was a ques­tion she had often asked herself, a question she had no answer to, and she looked at him steadily, no longer smil­ing. He didn’t understand the look—how could he have done?—and yet it didn’t seem to bother him. He was a little drunk, of course. He told her later that he had been wanting to talk to her for months, but had never dared.

“Am I so frightening?” she asked.

Was it that same night that she and Torben set off through the streets of Bloomsbury? When they came to Coram’s Fields he spread his raincoat on the ground and they sat down. They smoked roll-ups and talked, with London all around them, murmuring and mumbling under a warm charcoal sky…He seemed oddly familiar to her. It was as though she already knew him, or had known him before. As though he belonged to the part of her life that she thought of as the happy time, the life that had come to such a sudden end on that day of sun and wind, when the world went dark while she wasn’t looking. Perhaps he reminded her of somebody she had been close to as a child—or perhaps it was simply that he was gentle.

They began to seek each other out. They drank end­less cups of coffee in cheap cafés. They went to art galler­ies, and to the cinema. They walked for hours—through the West End, in Richmond Park, on Hampstead Heath. Since they shared a secret language—Finnish—they could talk about people without them knowing. They laughed a lot. Once she had Torben as a friend, it be­came clear to her how lonely she had been before. And there was something about his company that rekindled the innocence in her. The youth. He helped her to be the age she appeared to be. The age she was supposed to be. Up until then, she had felt like an actor in a spotlight, delivering a monologue. Now, suddenly, she had some­one on stage with her who she could play off, someone who could give her cues. Also, she was able to unbur­den herself without arousing suspicion or being judged.

Once or twice, she came close to telling him the truth. Since she couldn’t make sense of it herself, though, she doubted she could explain it to him, despite the fact that he was intensely loyal, and would want to believe her. At times, the temptation was almost irresistible, but she never quite gave in.

Though she realized he might want something from her, and that he might, at certain moments, long for that, she also realized he was in no position to insist. In other circumstances, this might have caused him pain, and yet it seemed to her that theirs was a relationship from which both parties stood to benefit. No, she wouldn’t sleep with him, but he gained in confidence and stature just by being in her company. They were both able to inhabit them­selves more fully. Like balloons that were filled with air, almost to bursting, they became lighter, and more joyous. And perhaps, in the end, she thought, it came as a relief to him that he couldn’t entertain the possibility of sex with her. As much of a relief as a regret, at least. Not to have to win her, or risk losing her. As it was, he could have it all—or almost…

Back in her apartment, she stood at the window, star­ing down at the murky, polluted waters of Suzhou Creek. She took out her phone and called the gallery, saying she would be late. She still couldn’t quite believe that Torben had appeared—and in Shanghai, of all places…But what could he do, really? He was on a business trip, or on hol­iday, and he would be gone again in a few days. There was little chance of a second meeting. She’d had a fright, nothing more. Shaking her head, she walked into the bathroom and turned on the shower.

Later, as she dressed for work, the sense of being threatened was replaced by a feeling of nostalgia. She could see the young man in the old one—the halting quality, the persistence. He had loved her, and she, in her own way, had loved him too. She wished she could have sat down with him and asked him about his life. Had it gone the way he thought it would? Had he been happy? And later, perhaps, when they had got over the shock of running into each other after so many years, when they were laughing again, just as they used to, she would ask him, half jokingly, if he had missed her…

But what was she thinking? Torben would expect her to be in her sixties, as he was. The fact that she hadn’t aged would render any normal conversation quite impos­sible. She wondered what had happened after she walked out of the restaurant. Had he apologized to Zhang and then staggered off, his mind in a daze, only half believing what he had seen? Or had the two men fallen into con­versation? If they talked, what would Torben have said?

How much would he have said? And what effect would the whole episode have had on Zhang? She took out one of his business cards, which she had stolen from his jacket pocket while he was sleeping. Perhaps she should call him and find out.

25 (More) Crime Books You Can Finish in an Afternoon

The Timeless Joys of Pet Cozies 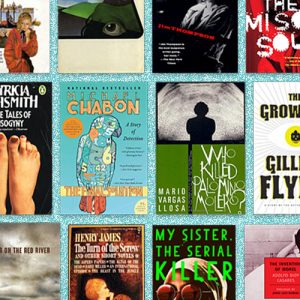 25 (More) Crime Books You Can Finish in an Afternoon In an age of distraction, it's hard to find time to read an entire book at one go, but the depth of concentration achieved...
© LitHub
Back to top