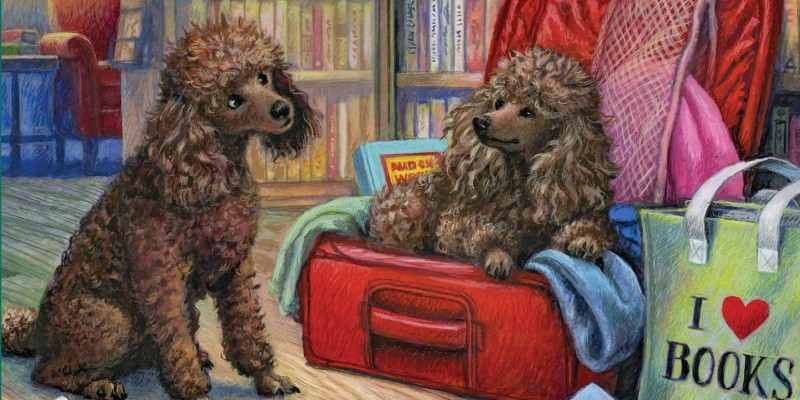 The Timeless Joys of Pet Cozies

Because every amateur sleuth needs a dog or a cat, or both.

A long time ago in a galaxy far, far away…Okay, I’m exaggerating. The early 2000s weren’t that long ago (even though some days it feels like it) and Michigan isn’t another galaxy (although, in the winter it looks like it compared to Tennessee). My point is when I was a lot younger and much more active, I used to train and compete with my two toy poodles, Coco and Cash. I was involved with a lot of activities when I lived in Michigan. My dogs were both registered therapy dogs with Therapy Dogs International and every month we visited people in hospitals, nursing homes and my personal favorite a convent for retired nuns. The nuns had dementia so each visit, our old tricks were received as though it was a joyous new experience. As a member of Echo Dog Club, Inc and St. Joseph Valley Agility Club (SJVAC) in Buchanan, Michigan we offered training classes and held trials for American Kennel Club (AKC) and United Kennel Club (UKC) canine performance events. Check out some pictures of my dog, Coco in her glory days schmoozing with her adoring public and soaring over obstacles on the agility course.

Most people don’t compete in canine performance events with their pets, but pets are still an important part of many of our lives. According to an article in the Washington Post, the number of households in the United States that own pets, varies depending on who you ask. The variance ranges from 68% or about 85 million families, according to the American Pet Products Association (APPA) to 57% or 77 million dogs and 58 million cats as reported by the American Veterinary Medical Association. Whether you believe the total is closer to 68% or 57% isn’t really important. The bottom line is that Americans have a lot of pets. So, it seems logical that this love of pets would show up in all areas of American life, and they do.

Pets are everywhere, from beer and car commercials to…you guessed it, books. Mystery lovers, especially amateur sleuths, and pets go together like peanut butter and jelly, wine and cheese, biscuits and gravy (don’t ask, it’s a Southern thing). Two of the mystery series I write feature pets. In my Dog Club Mystery Series, Lilly Echosby has a black toy poodle named Aggie and Samantha Washington in my Mystery Bookshop series has two toy poodles, Snickers and Oreo. Why? Because, I have a black toy poodle (Kensington), and when I started writing the Mystery Bookshop series, I had two chocolate toy poodles (Coco and Cash). My dogs are not only the inspiration for the dogs in my books, but Coco and Cash are also the models for the Mystery Bookshop covers. If you scan the shelves of your neighborhood library or bookstore, you’ll be amazed how many cozy mystery series include pets. I’ve pulled together a list of some of my favorite pet themed mysteries that’ll make you want to cuddle up with your own furry friend and get cozy with a good mystery. 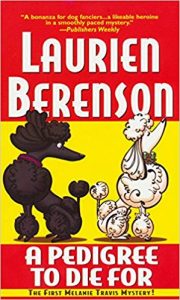 Laurien Berenson, A Melanie Travis Mystery, A Pedigree to Die For

The apparent heart attack that killed kennel owner Max Turnbull has left seven pups in mourning, and his wife Peg suspecting foul play. But the only evidence is their missing prize pooch–a pedigreed poodle named Beau. That’s when Melanie Travis, a thirty-something teacher and single mother is talked into investigating.

This fantastic series was one of the first dog-themed cozies I ever read and I fell in love with Berenson’s poodles along with her knack for weaving a good mystery. 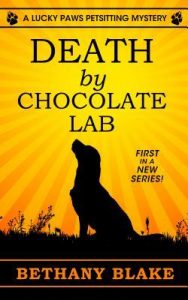 Pet sitter Daphne Templeton has a soft spot for every stray and misfit who wanders into the quaint, lakeside village of Sylvan Creek. But even Daphne doesn’t like Steve Beamus, the controversial owner of Blue Ribbon K-9 Academy. When Steve is murdered during a dog agility trial, Daphne’s sister, Piper, is the police’s number one suspect. Daphne sets out to clear her sister’s name—and find Axis, Steve’s prize-winning chocolate Labrador, who went missing the night of Steve’s death.

Death by Chocolate Lab is the first book in this series. One of my absolute favorite things about this series is that in addition to dogs, and mysteries, it also includes recipes for homemade dog treats. How cool is that! 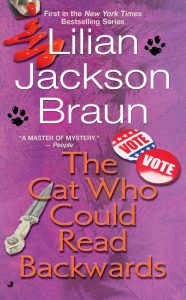 A stabbing in an art gallery, vandalized paintings, a fatal fall from a scaffolding—none of this is what Jim Qwilleran expects when his assignment with The Daily Fluxion turns his reporter talents to art. But Qwilleran and his newly found partner, Koko the brilliant Siamese cat, are in their element—sniffing out clues and confounding criminals intent on mayhem and murder. This riveting beginning to the Cat Who series is the perfect cozy mystery for cat lovers to start sleuthing!

This is the first book in this New York Times Bestselling series which features a whopping 30 books. Cat lovers will enjoy the antics of Koko and later Yum Yum in this lighthearted and humorous series. 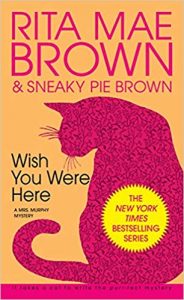 Crozet, Virginia’s post-mistress, Mary Minor Haristeen, “Harry” to her friends, has a tiger cat (Mrs. Murphy) and a Welsh Corgi (Tucker), a pending divorce, and a bad habit of reading postcards not addressed to her. When Crozet’s citizens start turning up murdered, Harry remembers that each received a card with a tombstone on the front and the message “Wish you were here” on the back. Intent on protecting their human friend, Mrs. Murphy and Tucker begin to scent out clues. Meanwhile, Harry is conducting her own investigation, unaware her pets are one step ahead of her.

For any pet owner that ever glanced at their cat or dog and wondered, what they’re thinking, this series is for you. Rita Mae Brown is a bestselling and prolific writer of southern cozies (there are 28 as of this writing) that include talking animals who are adept at solving mysteries. Their human companions aren’t bad either. 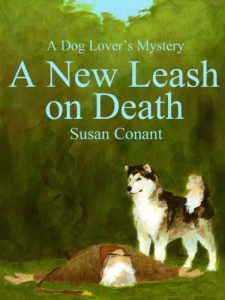 Why didn’t the elderly Dr. Frank Stanton return to release Rowdy from a long down? Because Dr. Stanton was on the longest down of all, strangled with his Alaskan malamute, Rowdy’s leash! Dog’s Life columnist, Holly Winter goes to a class at the Cambridge Dog Training Club to help out, but ends up offering temporary shelter to the victim’s dog and risking her own life to discover who killed Dr. Stanton.

No list of pet themed mysteries would be complete without Susan Conant. Whether you’re a cat or dog lover, you’ll find something to love in one of Conant’s mystery series (she has both A Dog Lovers and A Cat Lovers series). 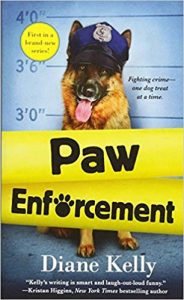 Officer Megan Luz is lucky she still has a job after tasering a male colleague where it counts the most. He had it coming, which is why the police chief is giving her a second chance. The catch? Her new partner is Brigit, a big furry police dog. When a bomb goes off at the mall’s food court, it’s up to Megan and Brigit to dig up clues and collar a killer.

Paw Enforcement is the first book in this popular (and extremely funny) series. The eighth book, Paw of the Jungle, is scheduled to release on Tuesday, November 26th.

V. M. Burns is the author of the Mystery Bookshop series, as well as many other works. Her latest book is A Tourist's Guide to Murder, now out from Kensington Books. Burns was born and raised in South Bend, Indiana. She currently resides in Tennessee with her two poodles, Coco and Kenzie. Valerie is a member of Mystery Writers of America and a lifetime member of Sisters in Crime. Readers can visit her website at vmburns.com.

Knives Out Is a Surprisingly Subversive Mystery 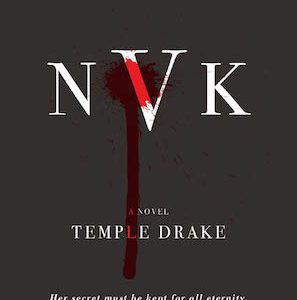 Once in the taxi, Naemi leaned forwards, her el­bows on her knees, her hands covering her face. She was sweating, and her brain...
© LitHub
Back to top