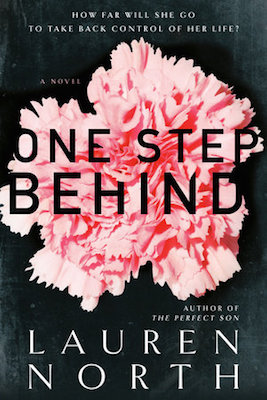 The following is an exclusive excerpt from One Step Behind, by Lauren North. Jenna, is a doctor, is horrified when her family is endangered by a man who has become obsessed with her. The police are unable to do anything, and she fears for her life. But then her stalker falls into a coma, and she winds up having to treat him.

The conviction rate for stalkers is less than 15 percent. I looked it up early on, before you peeled away all of my confidence and stole the last vestige of hope.

Even back then, even with the percentage so low, I clung to it. I reported you to the police, feeling so silly and time- wasting when I slid the cards you sent across the desk of the interview room with Stuart by my side. I was still trying to convince myself it was a silly joke, but they took it all seriously.

It was December. The same day I half saw you for the first time, when you were just a shadowy figure who threw that . . .that thing at me, and they wanted to know when it started.

“July,” I said, realizing for the first time how long it had been going on. And then it didn’t feel like a joke, it felt crazy that I hadn’t reported it earlier. But it all happened so slowly, and I kept telling myself it was harmless, that it would go away.

How naive I was when I opened that first card with the pink carnations on it that you sent to the hospital. Just two words inside:

I remember thinking it was odd that no one had signed it, but it didn’t toy with my mind in the middle of the night like the next one did a week later. The second card came through the letterbox. Same flowers on the front. Different words, and this one hand delivered.

They kept coming after that, like you were writing out the messages from a pack of Sweethearts.

At first, weeks could go by without a single incident, but since you stepped out of the shadows in May and showed me your face, your cold dark eyes, barely a day passes without you messing with me. You’re so good at appearing when I least expect it, staying around just long enough to wreak terror on my life and then disappearing before the police can find you.

“Keep a diary, Dr. Lawson,” the police told me. “Write it all down. Every sighting or attempt at contact and how it makes you feel. Prosecuting harassment isn’t easy. Often just a warning from us does the trick, but if it does go to court then having a diary of each event can make a difference.”

That was back when they were confident too. But how can they warn you when they don’t know who you are? When they can’t find you to talk to? All they have to go on is my description, and even that I was only able to give them last month when I saw you properly. While I’d love to say you’re the very essence of evil, you’re not. You’re just so . . . so average. Average height, average build. Dark hair, not short, not long. Jeans and T-shirt style of clothes, often a backpack. That’s how I described you to DS Church.

One average-looking man in a seaside town of two hundred thousand. And that’s not including the tourists who flood in and out like the tide any time the sun shines and most times when it doesn’t. You aren’t even a needle in a haystack, you’re one tiny piece of hay.

You aren’t even a needle in a haystack, you’re one tiny piece of hay.

“He’ll slip up one day,” they said. This was a while in, when they were no longer confident but apologetic. “Just keep doing what you’re doing. Vary your routine as much as possible the routes you take. Always carry your mobile with you.”

What they didn’t say, but what they was that stalkers escalate their harassment. Their obsession grows and with it their need for more, and that is when they make a mistake. I read that little tidbit online late one night, shining the light of my phone away from Stuart’s sleeping as not to wake him.

But even though I’ve stopped expecting it to lead to anything, I still log every sighting with the police

Five minutes before my shift starts I walk through the hospital doors. I ignore the sign for A& E and head toward the back of the hospital. Stopping by the police station to drop off your latest gift has almost made me late, but I still have time to gather myself before I’m due to start work.

I turn a corner and then another, until I reach my destination—a set of three female toilets half-hidden beneath a staircase.

The walls are painted a garish yellow and the room smells of human waste and bleach, mingled together with the lavender air freshener that squirts out from a little box by the sinks every five minutes, but I like the quiet compared to the new toilets at the front of the hospital.

I choose the last cubicle in the row and lock the door. I drop the lid of the toilet seat and sit for a moment, feeling so tired. So spent. And I haven’t even started my shift yet.

I reach inside my bag for my diary— a black A5 day planner I bought just for you. The first entry is the day I saw you standing in the park across the road from the house. It was early December when I was going to work and coming home in pitch- black darkness most days. It’s hard to remember how I felt back then as I opened the front door. Alert, I suppose. Since July I’d been receiving cards and the occasional e-mail that made my blood run cold. There’d been hang- up calls to the house. The phone would ring endlessly in the middle of the night until we unplugged it and decided to go without a landline.

My head was full of the pre-Christmas panic of trying to fit in even one of the long list of festive events the school had invited parents to. Plus Christmas shopping and the set meal the A& E staff all begrudgingly paid for and went to each year, plus work itself which was a constant stream of homeless people with pleurisy or pneumonia, and office party mishaps. Not to mention the barrage of accidents from hanging Christmas lights.

I stepped out of the front door, pulling my scarf tighter around my neck and there you were. A shadow behind the railing in the park. I didn’t see your face and probably wouldn’t have noticed you at all if you hadn’t moved, swinging your arm back and throwing something at me. It flew through the air, catching in the light of the streetlamps and that’s when I saw what it was— a doll with dark red hair, like mine.

Terror shot through my body like a bullet firing from a gun. I raced back into the house and up the stairs to wake Stuart, but by the time he went out there, you were gone. We found the toy in the gutter and took it with us to the police station, along with the cards. It was the sort of thing Beth used to play with when she was younger, the kind of baby doll with the eyes that close by themselves whenever it’s lying down, except this one had no eyes. They’d been picked out, and one of its arms was burned until the plastic had melted into a gloopy blob. But the worst thing about that doll, the thing that spreads dread through my body every time I think about it, was the clothes it was wearing—little green doctors’ scrubs.

I skip through empty pages until I come to the first sick gift you left me in January— a pale pink box left on my doorstep with my name scrawled across the top. Beth scooped it up as she walked in from swim lessons and brought it to me in the kitchen.

I thought it was a gift from her and grinned as I pulled off the lid.

It was hair. Dark red hair, cut from a doll, the police told us later. No head this time, or body, just clumps of hair cushioned on a bed of pink carnations—Christ, I hate those damn flowers now—and burned bits of photographs.

The photos were black in places, bubbled and brown in others, but I still recognized the happy faces of my children, the family snapshots of us from holidays.

“What’s in it, Mum?” Beth asked me, stepping closer.

I shoved the lid back on and pulled Beth into my arms so she couldn’t look.

The 35 Most Iconic Caper Movies, Ranked 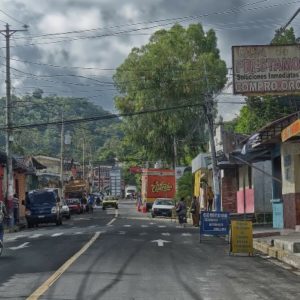 MS-13: How Neo-Colonial Violence and Exploitation Gave Birth to America's Most Notorious Gang People enter the US without authorization to escape violence, threats, civil war, natural catastrophes and economic peril,...
© LitHub
Back to top