Poppy Redfern and the Midnight Murders 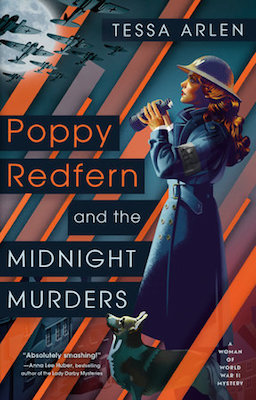 The following is an exclusive excerpt from Poppy Redfern and the Midnight Murders, by Tessa Arlen. It’s 1942 and Poppy is trying to make the best of the war. Her family’s property has been seized by the War Office and she spends nights as a neighborhood guard. But when two young women (who were dating American officers) are found strangled, the town turns upside down with mistrust and fear, and Poppy must catch a killer hiding in her own backyard.

Police Inspector Hargreaves of Wickham’s Criminal Investigation Department loomed over me as I sat on the edge of my chair. The furniture, brought with us when we had moved from Reaches, was far too large for the lodge’s front parlor, and so was the inspector.

“Thank you for waiting for me, Miss Redfern. I am sorry to be so late getting to you.” He had the careful manners of a considerate man. “Now then, you were walking your ARP patrol last night.” A glance down at his notebook. “Do you know what time it was when you met up with Miss Newcombe, Miss Wantage, and Sergeant . . .” He hesitated over the last name and mispronounced it. “Perrin?”

“I can’t give you the exact time, but I can come close. It would have been between ten twenty and ten forty; something like that.”

“And where was that?”

“Outside the village on the road to Lower Netherton where it junctions with the new road to the main entrance to the airfield.” As I had waited for Detective Hargreaves I had replayed the last time I had spoken to Doreen. I was surprised to realize that when someone you know has been murdered, it colors everything about the last time you saw them, and so I had tried my best to remember our meeting as accurately as I could.

“Hiya, Poppy,” Ivy Wantage had sung out as I walked down the lane toward them. It had taken her less than five days to pick up the slang used by the young men up at the base. Ivy is a happy, outgoing girl, but the village is all she knows, and I had realized just how naïve and impressionable she was. “You should have come to the party up at the base with us! It was ever so much fun, wasn’t it, Doreen?”

Doreen had not answered her friend. She stood apart from Ivy, who was arm in arm with an American in uniform. A three-quarter moon shone through the trees on the edge of the lane, and Doreen’s hair had gleamed white-gold in its light, her carefully lipsticked mouth dark against pale cheeks. She had looked like a doll I had once seen, and desperately wanted to own, in the window of Whiteleys toy shop in London: untouched, perfectly dressed, and self-contained in its glossy white box.

“Poppy, this is Sergeant Joseph Perrone. He’s a flight mechanic with the American Air Force. Miss Redfern is our Air Raid Precautions warden for the village, Joe; that’s why she couldn’t come to the party.” Ivy had completed her introductions and then said, with pride, “Miss Redfern did her air-raid training in London.” Roundly pretty and taller than her best friend, Ivy snuggled closer into the crook of the sergeant’s arm.

The doll came to life: Doreen laughed and shivered her shoulders in pretend fear of night bombings. But Sergeant Perrone automatically extended his right hand. “Pleased to meet you, Miss Redfern. I can’t imagine what it would be like to be in London right now.” His tone had been respectful. “Is it still as bad as the newsreels say?”

I had nodded. “Yes, I am afraid it is, but nothing quite as bad as the Blitz last year.” And to make up for my ungracious manner when I had met Lieutenant O’Neal: “We are so glad you are all here . . . you know . . . to help us win this war. I’m sorry I couldn’t come to the party.”

“You weren’t the only one. Bud is still in the sick bay.” Doreen’s laugh was dismissive. “That’s that comes of being daft enough to eat Woolton pie in Wickham.” She waved an unconcerned white hand with darkly lacquered fingernails at the absent Sergeant Bud Sandusky, who had monopolized all her time since he had arrived, and cast a glance under her lashes at Perrone. “I told you boys that stuff was poison. It could have been cat meat.” She had deftly turned the conversation back to an evening that I had not taken part in.

“Certainly wasn’t chicken potpie,” Sergeant Perrone had agreed. “Now, which one of you young ladies do I drop first?”

“Me,” said Doreen. “And then you can walk Ivy all the way down the lane to her house.” A flirtatious laugh as she gave her consent to their continuing on alone.

Article continues after advertisement
I had seen dead people being dug out of the rubble of bombed-out buildings and had hoped their end had been quick, but I couldn’t begin to imagine what it would be like to have your life choked out of you.

I related our conversation to Inspector Hargreaves as accurately as I could. Doreen was always so sure of herself, I thought as I waited for him to write down my account in his notebook. Even when she was six it was Doreen who decided what games to play and who should sit next to her in Sunday school. The image of popular and pretty Doreen lying dead in the churchyard flew into my mind again. I had seen dead people being dug out of the rubble of bombed-out buildings and had hoped their end had been quick, but I couldn’t begin to imagine what it would be like to have your life choked out of you.

“Did everything seem as usual with the two young ladies and the American?” Mr. Hargreaves’s voice cut in on my thoughts. “No arguments or that sort of thing?”

It was the way he said, “American,” as if he were describing a savage from a barely civilized  country. After Mrs. Wantage’s observations about how the village was already quite sure that Doreen had been killed by her “American” boyfriend, I found the way he said it distasteful. I was not going to endorse a change in attitude toward the base. “No, they were enjoying each other’s company. I don’t know about ‘as usual’ because it was the first time I had met Sergeant Perrone, but he struck me as a  gentleman: thoughtful, polite, and considerate. We said good night and I continued down the lane. I heard the click of the door latch and Doreen’s voice called out something like: ‘Good night, you two—don’t do anything I wouldn’t do.’ They all seemed to be having a pretty nice time of it.”

Inspector Hargreaves cleared his throat. “And you saw Miss Newcombe go into her house?”

“No, their front door is screened from the road by a hedge. I heard her lift the door latch—she called out good night to us and then I heard the door shut.”

“Door shut.” He repeated as he wrote. “And you think that Miss Wantage and the sergeant  followed you down Smithy Lane?”

“I know they did. I walked on ahead and had already turned right onto Streams Lane when they reached the smithy—where the Wantages live.” He looked up from his notes, his eyebrows raised. “I looked back,” I said. “I could see them quite clearly against the white plaster walls of the house.” I did not say that they had been locked in each other’s arms.

“And the rest of your patrol, how long did it take you to reach the churchyard?”

No need for hesitation now. “Forty minutes, no stops, and we were walking at a fast pace.” I nodded down at Bess, who was sitting upright at our feet, her long ears pricked forward as she considered the policeman.

“You didn’t check your watch, or the church clock as you walked past the graveyard?”

“The church clock hasn’t kept time for years. But I was home a little after midnight; I checked my watch then.” He flipped his notebook shut and tucked it and his pencil into the inside breast pocket of his rumpled suit jacket.

“You didn’t see Miss Newcombe in the churchyard as you walked up the hill?” And just like that, the tenor of our interview changed.

“See Miss Newcombe?” The thought was an unwelcome one. “No, I didn’t.”

“And, as you say, you saw or heard nothing unusual? Not as you were walking up Water Lane toward the churchyard?”

“I would have said if I had.” I looked directly into his face.

“Miss Newcombe was a friend of yours?”

“Not really. I knew her, though; she grew up in the village. I didn’t go to school here . . .” I  stopped, at a loss to explain how isolating my girlhood had been.

“Haldean, wasn’t it?” He said the name of my pretentious girls’ boarding school—a place where I had spent ten miserable years, which had successfully separated me from the other children of my age in the village. His expression made what he was thinking quite clear: a Haldean girl would not run around with a baker’s daughter.

Part of me wanted to say that it wasn’t the difference in background that had made my grandparents send me away to school quite as much as their belief that growing up without brothers or sisters would make me an even more shy child than I already was. They had hoped that the company of other girls of my age and background would bring me out more. But I am a natural loner, so if anything, Haldean simply made me more of one.

“Doreen and Ivy are at least two years younger than I am.” I sounded stiff, defensive even, and flushed with embarrassment.

“If you remember anything at all, however trivial it might seem, please get in touch with Constable Jones.”

He picked up his hat and in two strides was out of the drawing room and into our cramped hall, where he barked his shin on an oak settle. I followed him. There had been one question nagging away at me all morning— I might as well ask it. “Chief Inspector Har—”

The deep lines from his nose to the corners of his mouth and his pouchy eyes gave him the look of a tired basset hound, but his expression was kind. “Her murderer? It’s too early in our inquiry to know— we won’t have the time of her death for a day or two.”

The glance he cast my way, as we said good- bye, was thoughtful. I’m certainly on his list of suspects, I thought as I closed the front door. 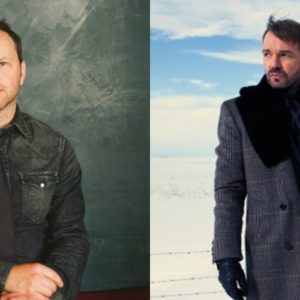 Noah Hawley and Billy Bob Thornton Look Back at the First Season of Fargo Excerpted from FARGO: THIS IS A TRUE STORY by Noah Hawley. Copyright © 2019 by Metro-Goldwyn-Mayer Studios Inc.  Reprinted...
© LitHub
Back to top