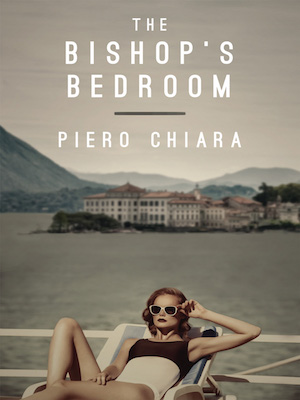 The following is an exclusive excerpt from The Bishop's Bedroom, by Piero Chiara. Originally published in 1978, this elegant thriller begins in Italy in 1946. Its protagonist is trying to put off returning to work when he winds up a guest at a beautiful seaside mansion. Invited to stay in a bedroom once occupied by a deceased relative, a bishop, he doesn't yet realize the strange mystery that is about to unfold.

For five days I resisted the temptation to return to Oggebbio, where it seemed I’d scented one of the lake’s many hidden mysteries. But one afternoon, while I was on my way back to my home port, I moved out of the wind so I could pass within sight of the villa. I was three hundred meters offshore and moving beyond it when I noticed a signal from the terrace. Someone was waving a towel, or a large white handkerchief. I drew up and recognized Orimbelli on the lookout. There was nothing for me to do but lower the sails and coast into his dock.

“I spotted you half an hour ago with my binoculars when you were abreast of Laveno,” he said from the edge of the terrace. “Come on in. You’re in time for tea.”

The two women were in fact taking tea under the great copper beech that stood on the shady side of the villa. Matilde was serving, and she had the vague air of being happy to see me again. After tea, she was anxious to go down to the dock to inspect my boat with her brother-in-law. I showed them everything, from the rigging to the couchettes, even the little toilet I’d fixed up under the prow.

“A veritable yacht!” Orimbelli exclaimed. “And to live on it, like you do, all summer long …”

“A tub,” I said with false modesty. “Not much more than a rowboat or fishing boat.”

It was understood that I’d stay for supper. Even the old serving maid, Lena, nicknamed Lenin, welcomed me with a lovely smile. I realized that my presence was actually necessary in order to breathe some fresh air into that atmosphere, and to make Signora Cleofe bearable. I noticed later that she retracted her claws only when I was around. Not only did she retract them, she sought to convince me that she didn’t have any, that she was a wounded spirit, aggrieved, yet full of resignation and tolerance.

A young man like me, in his thirties, free and well-off, if I really did have a yacht, one of only two or three of all the boats on the lake at that time … A serious person (and by now she was convinced I must be), who would go back to work in some bank or family business after the holidays. It was clear she didn’t dislike me at all, even if my way of life was somewhat perplexing. She went as far as asking me openly what sort of work I did.

“So, are you in industry or business? Or maybe you’re a professional, an engineer, perhaps, like my poor brother?”

“To tell you the truth, I don’t have any employment at the moment,” I replied. “Last summer I came back from Switzerland, where I was a refugee, as your husband will have told you. I’m still looking around for something to do, something suitable …”

“If you wait much longer,” she retorted tactlessly, “you’ll end up like my husband. At forty he has yet to discover what work suits him.”

So as not to disenchant her, I invented a story on the spot, telling her that come autumn I would begin work with a friend, a furrier and importer of hides. I’d end up in the leather business, a few days in the Milan office and a few at the tannery at Verolanuova in the province of Brescia. But I didn’t have any pressing need to earn, since I was from a good family and wasn’t—how could I put it?—exactly penniless. I explained. “I’ve got some little places inherited from my uncle, houses I’m going to renovate which rent fairly well.”

Matilde was watching me unobtrusively. She’d changed for dinner, and had put on an iron-gray dress over a puffy, rose-colored blouse that ballooned over her bosom, making it look like an enormous carnation.

Taking advantage of his wife’s exceptionally good mood, Orimbelli talked about the war in Africa. It seemed to obsess him. He’d been an officer in the Somalian mounted squadron under General Aimone Cat, had fought with honor and made a victorious entry at Gondar. His brother-in-law had also been at the front during one of the counterattacks that decided the war in the Lake Ascianghi region, but he hadn’t been seen or heard from since the 2nd of April 1936. Orimbelli passed over his brother-in-law to talk about the marches and the battles, about Addis Ababa, Badoglio and Graziani, but above all about Aimone Cat, who’d recommended him for a silver medal. It came to nothing, however, when it was discovered that Orimbelli was not an enlisted member of the Fascist party.

During the discussion, it emerged that three months ago, they’d begun the process of filing papers at the Court of Assizes in Milan to have the poor engineer, Angelo, declared “presumed dead.” The requisite ten years had passed since he’d last been heard from alive.

“We were married by proxy at the end of November ’35,” said Matilde, shaking her head.

Signora Cleofe gave her a severe look, perhaps to shut her up on a subject unsuitable for discussion with strangers.

“Yes, by proxy,” Matilde went on, indifferent to her sister-in-law’s glare. “Poor man! It seemed he knew he wouldn’t be back. We should have been married before he left, but the papers weren’t ready, so our marriage was celebrated in absentia. He presented himself to the bishop of Asmara and four weeks later, when the papers came from Milan, I went to get married in my own parish. My husband’s proxy, Professor Ernesto Configliacchi, put the ring on my finger. He was my husband’s professor from the polytechnic. You’ll have heard of him as he’s a celebrated man.”

“Of course!” I responded. “Who hasn’t heard of Professor Configliacchi!” even though the name was new to me, and faintly ridiculous. “So are you legally a widow?” I continued.

Orimbelli interrupted. “What does it matter? Proxy marriages become invalid if they’re not consummated within six months, and after six months he was no more … She’s wanted to consider herself married these ten years,” he nodded knowingly at Matilde, “out of devotion to the memory of the missing. But my wife has presented the application, and with the declaration of ‘missing, presumed dead,’ she’ll come into possession of the whole of the inheritance, which her father left undivided. As it should be, if you like.”

“If you like, and even if you don’t, Mr. Lawyer!” his wife pointed out. When her husband had said he was a lawyer, or rather, a law graduate, she responded to the line with, “Graduate in law, or rather in nothing, since if a law graduate doesn’t practice as a lawyer or a notary, what good is the degree? It’s a piece of paper, an excuse for saying: I’ve made the effort, and now I have the right to take it easy for the rest of my life.”

That’s how I got involved in their affairs that night, and when Orimbelli suggested I should sleep in the house, his wife showed not the least surprise.

“Of course!” she said. “You wouldn’t want to send him to sleep in his boat in the dock!”

“Then let’s put him in the bishop’s room,” he said. The evening ended with a Chartreuse, and he took me up to the first floor. He opened the third door on the right, turned on the light and ushered me into a room carpeted in red, with a canopy of gold-painted wood hanging from the ceiling. From the canopy and around the bed hung brocade curtains, the same red as the carpet. At the foot of the bed was a white trunk framed in metal. On its rounded lid the letters T.M.O. could be seen stamped in black.

“The bishop?” I asked, indicating the three letters.

“Monsignor Alemanno Berlusconi, the bishop, was my wife’s great-uncle. He died in ’28, and until twenty years ago, he spent summers at this villa.”

“No, it’s my trunk. It’s gone everywhere with me since I went to university. It’s been all over Europe, and of course to Africa. My name is Temistocle Mario Orimbelli,” he said, pointing to the initials.

“And the bishop? How does he come into it?”

“Monsignor Alemanno Berlusconi, the bishop, was my wife’s great-uncle. He died in ’28, and until twenty years ago, he spent summers at this villa. My wife’s father decorated the best room for him in the manner suited to a prelate who’d been a papal legate in various parts of the world and part of the Congregation of Rights. At the time I wasn’t around to know him, but Cleofe remembers him well. As you can see, his prayer stool is still there, beside the bed. And here: look …”

He went over to the large wardrobe and opened it. Up high, on a hanger, was a bishop’s cassock in red cloth, with buttons right down to the hem and an amice over the shoulders. Over the crook of the hanger you could see the skullcap positioned where the head might have been. Placed neatly together on the floor of the wardrobe below the vestments was a small pair of shriveled black shoes, the silver of the buckles so faded it looked like lead. Despite the odor of naphthalene issuing from the wardrobe, the bishop’s clothing seemed fairly moth-eaten.

Orimbelli closed the doors again with a satisfied smile. He then opened a little door beside the bed which was concealed by a curtain. I hadn’t noticed it before.

I looked in, spotted a sink and imagined the rest.

With the air of having completed his duties as head of the house, my host made as if to retire discreetly. I said good night, thanked him and closed the door.

Then, suspicious of the trunk—it seemed I’d heard a thud from within—I tried to open it, but found it secured with three locks and a padlock. So I opened the wardrobe again and looked at the bishop’s clothing. It was from there that the sound had come: beside the shoes, I spotted a sack of mothballs that must have fallen from within the vestments when the door was closed a few moments before.

From The Bishop’s Bedroom, by Piero Chiara, translated by Jill Foulston. Used with the permission of the publisher, New Vessel Press. Copyright © 2019 by Piero Chiara.

Poppy Redfern and the Midnight Murders 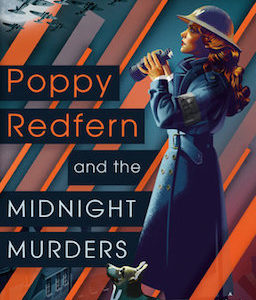 Poppy Redfern and the Midnight Murders Police Inspector Hargreaves of Wickham’s Criminal Investigation Department loomed over me as I sat on the edge of my chair....
© LitHub
Back to top