The following is an exclusive excerpt from Real Life, by Adeline Dieudonné. In this dark coming-of-age story, a young girl and her little brother live in fear of their terrifying, game-hunting father. Their mother can't stand up to him either. But while the children spend their days playing, a terrible accident happens, with devastating effect.

One summer evening, my mother had made peaches stuffed with tuna, which we ate on the blue stone terrace overlooking the garden. My father had already left the table to settle down in front of the tv with his bottle of Glenfiddich. He disliked spending time with us. I think nobody in our family liked gathering for the evening meal, but my father imposed this ritual upon us, as much as he imposed it upon himself. Because that’s how things were. A family takes its meals together, whether they enjoy it or not. That’s what we saw on tv. Except that people seemed happy on tv, particularly in the commercials. They chatted, they laughed. They were beautiful and loved each other. Family time was sold as a reward. Along with Ferrero Rocher, it was supposed to be the treat you were entitled to after long hours working in the office or at school. Our own family meals seemed more like a punishment, a big glass of piss we had to drink daily. Each evening proceeded according to a ritual that bordered on the sacred. My father would watch the tv news, explaining each subject to my mother—on the principle that she was incapable of comprehending the slightest bit of information without his enlightenment. The tv news was important to my father. Commenting on the news gave him the impression of having a role to play in it. As if the world depended upon his reflections in order to progress in the proper manner. When the end credits boomed out, my mother would yell: “Dinner’s ready!” My father would leave the tv on, and everyone would sit down to eat in silence. When he got up to return to his couch, we felt something like a liberation. That evening, too, like all the others.

Sam and I had left the table to go play in the garden. The sun caressed the fading day with a light that bore the sweet scent of caramelized honey. In the hallway, my mother was cleaning Coco’s cage. I had tried to tell my mother that it was cruel keeping a parakeet in a cage. Especially as the garden was full of them—which was a problem, in fact, because the parakeets ate the food of the little birds such as the sparrows and chickadees; not to mention our cherries, which they devoured before they had time to ripen on the tree. The reason we had parakeets around was that there had once been a small zoo several miles from the Demo. But it went bust when an amusement park opened nearby and drew all its visitors away. Most of the animals were sold to other zoos, but nobody gave a damn about the parakeets, and transporting them would have cost too much. So the director simply opened their cage. Perhaps he thought they’d die of cold. But they didn’t. On the contrary, they adapted, built nests, and had young. They always moved as a group, forming big green clouds that flew across the sky. It was pretty. Noisy but pretty.

I didn’t understand why that poor Coco had to stay in a cage and watch the others having fun without her. My mother said that it wasn’t the same, that she’d come from a store, that she wasn’t used to it. But still.

So my mother was cleaning Coco’s cage. It was “Flower Waltz” and ice-cream time. The truck had stopped alongside our house, by the hedge. The old ice-cream man was there, a dozen children chirruping around him. Monica had told me that he wasn’t like the owner of the car boneyard, he was kind.

Article continues after advertisement
When she had talked about him, I had seen something strange in her eyes.

When she had talked about him, I had seen something strange in her eyes. I told myself that since they were both old, perhaps there had been something between them once. Perhaps a beautiful love story thwarted by old family feuds—I was reading quite a lot of Harlequin books at the time.

When the ice-cream man handed Sam his vanilla and strawberry ice cream, I looked at his hands. There’s something reassuring about old people’s hands. As I imagined how their delicate, elaborate mechanism had functioned and obeyed this fellow without him thinking about it, for such a long time, and as I thought about the tons of ice creams they had made, without ever letting him down, it gave me faith in something I couldn’t define. It was reassuring. The hands were beautiful too, the skin so thin over the tendons they were almost bare, the blue veins like streams.

He looked at me, eyes twinkling:

“And for you, my little darling?”

It was my turn. I’d been repeating the line in my head for the past five minutes. I didn’t like to improvise when ordering an ice cream, I don’t know why. There had to be someone in line ahead of me, giving me time to choose what I wanted and to put together my sentence. So it would come out right, with no hesitation. We were the last that day, the rest of the kids having had their ice cream and left already.

“Chocolate and stracciatella in a cone with whipped cream, please sir.”

“With whipped cream, my little lady! But of course …”

He winked as he pronounced the words whipped cream to let me know it was still our little secret. Then his hands, his two faithful dogs, set to work, repeating their little dance for the hundred-thousandth time. The cone, the ice-cream scoop, one scoop of chocolate, the tub of warm water, one scoop of stracciatella, then the siphon, a real siphon, containing homemade whipped cream.

The old man leaned forward to put a pretty whirl of cream on top of my two scoops. His blue eyes were open wide, tightly focused on the cloudy spiral, the siphon against his cheek, the movement gracious, precise. His hand so close to his face. Just when he had reached the summit of the little cream mountain, right when his finger was preparing to ease off and he was about to straighten up, the siphon exploded. BANG!

I remember the sound. It was the sound that petrified me first. It slammed into each wall of the Demo. My heart skipped two beats. It must have been heard as far as the depths of Little Gallows Wood, as far as Monica’s house.

Then I saw the kind old man’s face. The siphon had smashed into it like a car through the front of a house. Half of it was missing. His bald head remained intact, but his face was a mash of meat and bone. A single eye hung in its socket. I took it all in.I had time. The eye looked surprised. The old man stayed standing for a couple of seconds, as if his body needed time to realize that it now had mincemeat for a face. Then it crumpled.

It seemed like a joke. I could even hear laughter. Not real laughter, and not coming from me. I think it was death. Or fate. Or something like that. Something much bigger than myself. Some supernatural force that decides everything and that was in a mischievous mood that day, and so decided to have a little fun with the old man’s face.

I don’t remember much after that. I screamed. People came. They screamed too. My father came. Sam stood motionless, his big eyes open wide, his little mouth agape, clutching his cone of vanilla and strawberry ice cream. A man puked up melon with Parma ham. The ambulance arrived, then the hearse. 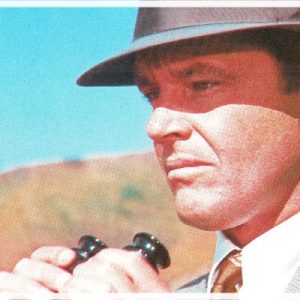 How Raymond Chandler and the Tate-LaBianca Murders Inspired the Making of Chinatown Nostalgia, in the wake of the Tate-LaBianca murders, redolent of a greener, guileless city, paled Robert Towne’s vision....
© LitHub
Back to top