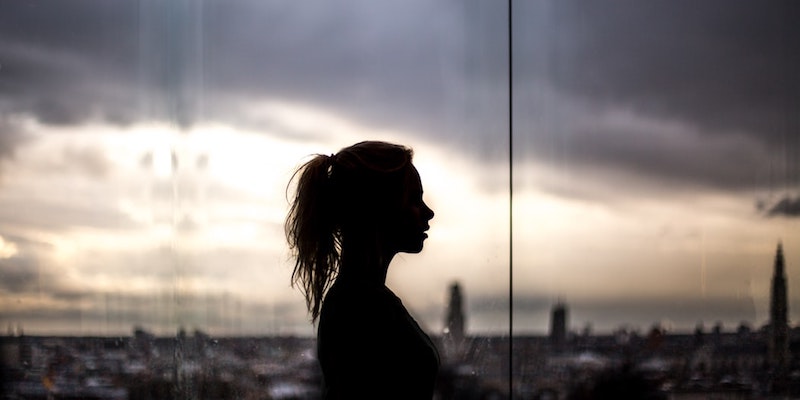 Rachel Louise Snyder on domestic violence, preventable homicide, and her work of nonfiction, No Visible Bruises

There is something telling about the fact that I nearly missed this book (it was published last May). I’m tempted to make an analogy here about domestic violence: it is the most intimate of crimes, one that is both a public epidemic and a private matter. I’ve written here before about how books about rape are often not treated as crime books. Similarly, I’ve seen no coverage of Rachel Louise Snyder’s excellent book about domestic violence, No Visible Bruises (Bloomsbury, 2019), on any of the crime sites, though it was covered by major outlets: it got a rave in the NY Times and was deservedly well-reviewed in the Washington Post, the Atlantic, and NPR. Snyder also just got nominated for the National Book Critics Circle award.

Snyder is both a passionate and a practical writer. She chronicles how difficult it is for the people working on the front lines to combat domestic violence, but she also gives domestic violence victims a welcome and necessary voice. As she says at the end of the interview (spoiler!), the best thing we can do to help those in abusive relationships is to listen to them. 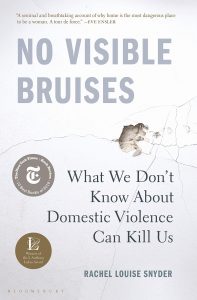 Lisa Levy: How did you start writing about domestic violence?

Rachel Louise Snyder: I had always done issues of human rights, stories of social justice—women jailed for love crimes in Kabul, child brides all over the world, kids who lived in the sewer’s tunnel system under the streets of Bucharest. For about six years, I lived in Cambodia and when I returned to the States, in 2009, I met a woman named Suzanne Dubus (sister of the writer Andre Dubus III). She’s a national leader in the field of domestic violence, and I was visiting Andre one weekend (we’ve been friends for decades) and she drove up. We chatted for a bit and she told me she’d helped create a program that tried to predict domestic violence homicide before it happened in order to prevent it. And it blew me away. I was like, “Why isn’t this a headline across the country?” No one was paying attention at all, and I realized that we had a real problem. Not just the obvious, domestic violence as a preventable crime, but with the media, who were simply not reporting on this. Total ambivalence. And I was the media. So I took it on.

LL: There’s an argument to be made that domestic violence is the crime behind crime, that people who experience violence at home are more likely to commit violent acts. Do you think this is true?

RLS: I think they’re separate questions. I don’t know that people who experience domestic violence are more likely to commit violent acts (victims who experience extreme domestic violence and kill their abusers don’t generally commit any other violent acts, actually. They often serve their time and get out and they go right back to being law abiding citizens). Where there are clear intersections are in mass shootings. There’s research now that suggests mass shootings are domestic violence homicides nearly two-thirds of the time, but because they include non-family members, they’re not framed as such. Think of Newtown, for example. Lanza killed his mother first. A second intersection is what you’re asking about, with domestic violence as a kind of warning… cases like the Orlando Pulse nightclub shooting. Mateen was terribly abusive to both his first and second wife, and he was never arrested, never charged.

LL: How many households in America have a man who hurts women and/or children?

RLS: There are a lot of different ways of looking at this. There’s physical violence, but there’s also coercive control, which can be even more debilitating. For women, somewhere around 1 in 4 will experience one or both of these. And of course women can be violent, too. It happens less often, but is still statistically significant. And any non-heteronormative relationship can have violence. Carmen Maria Machado’s recent memoir, In the Dream House, dissects this beautifully. It’s part of a really important conversation.

LL: Was it difficult to get domestic violence victims to open up to you? 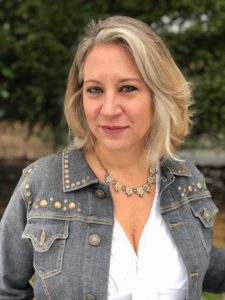 RLS: Not really, actually. I’m the kind of person who is comfortable talking to anyone, in any setting—from prisons to galas. So I think I must be easy to talk to, maybe. But also, victims don’t often have people listen to them. They live in a kind of perpetual anxiety and fear where their voices are muted, so I find that in fact most of them wanted to talk. What’s surprising is that the abusers want to talk, too. Sure, they often want to justify their behavior, but once you get past all that, you find they’re people in pain, too.

LL: There are some real heroes in the book working on this issue. Who stands out for you?

RLS: Suzanne Dubus and Kelly Dunne for sure—they created the prediction program for domestic violence homicides. And they’re doing the work today still. But there are so many. Martina Latessa, this amazing detective in Cleveland; if we could clone her, we could really solve some social crises in this country. There are researchers who aren’t out there like Latessa doing the front line work, but they’re informing everything the front line folks do—people like Jacquelyn Campbell, Gael Strack, David Adams, Neil Websdale. They’re all my heroes. I’m getting a lot of attention for the book, and it’s wonderful, but they’re the ones who really made it all possible. They paid attention.

LL: How could law enforcement do a better job of resolving domestic violence incidents, especially in the homes of people they know to be abusers?

RLS: This is getting into the weeds of domestic violence a bit, but they can start by not arresting victims (this happens far more than anyone would think). They need to understand the psychological forces at play. I sat in on a hostage negotiation training for domestic violence that was incredible, because I learned that hostage situations for, say, the proverbial bank robber is diametrically opposed to those in domestic violence; a bank robber wants to get out alive. An abuser who takes a victim hostage often doesn’t care whether he lives or dies; it’s losing control that he fears. This changes everything. And most police are not attuned to this, and not trained in it. Same with the different types of domestic violence—coercive control, for example, and strangulation. Both of these are very different markers. But also, I just want to note here, that victims often don’t ever interact with law enforcement at all. They are much more likely to call their clergy. So this awareness and training needs to be much broader than just the police.

LL: People might be surprised to find out how common domestic violence is. Is there still a stigma about talking about it? Can you talk about why that might be?

RLS: Totally a stigma! There is so much shame. When you’re the victim of a random crime—a carjacking, say. You will have empathy from the community in droves. With domestic violence there is still this subtext about it having been your choice to be with this person. And our system does not make it easy to leave—from cultural messages right down to the courts. What the #metoo movement has done, among many other things, is give an entryway to begin to talk about these things. We need to take away the stigma and shame and that requires all of us sharing our stories. That’s why Machado’s memoir is so important. And Kelly Sundberg’s work. And Leslie Morgan Steiner. And Terry Crews (the actor). And so many others.

LL: What do you think the most effective tactics have been in trying to wipe out domestic violence? Task Forces? Other programs?

RLS: Maybe it sounds odd, but I’m not sure I can answer this. I think different things work with different people in different geographies. A blue-collar worker in a rural area is going to respond differently than, say, a professor in an urban area. The key is that whoever it is, they have to want to change. And that’s the trick. Change is hard. We can’t arrest our way out of domestic violence. So we have to try every program everywhere; that’s my takeaway. Try it all. Some will fail. There’s a lot of controversy around the efficacy of batterer’s intervention. Does it work? Are our expectations too high? My view is that we have to try everything all at once.

LL: It’s hard to feel optimistic about this issue as it’s widespread, often unreported, and extremely dangerous. How are we supposed to combat it?

One summer evening, my mother had made peaches stuffed with tuna, which we ate on the blue stone terrace overlooking the garden....
© LitHub
Back to top