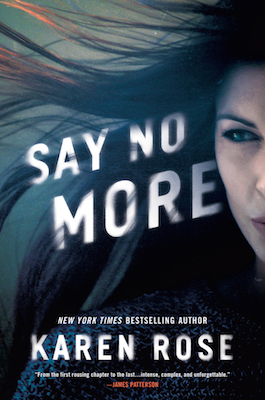 The following is an exclusive excerpt from Say No More, by Karen Rose. It's been seventeen years since Mercy Callahan left the cult where she was raised, and as long since she's seen its leader, Ephraim Burton. But when she, her brother, and a homicide detective learn the new whereabouts of the cult, they decide to try to stop it for good. But when Ephraim learns that Mercy is looking for him, he is determined to bring her back.

Rhoda stumbled to Mercy’s side, dropping to her knees beside her daughter. “Mercy? Say something. Please.”

But Mercy remained frozen where she lay, still in the fetal position. Wildly Rhoda searched the area, but the parking lot was deserted. There was no one to hear her. No one to help.

DJ was returning, his face dark and furious.

“What did you do to her?” Rhoda demanded, beyond caring what he’d do to silence her. All thoughts were for the daughter she’d failed in every possible way.

DJ smiled and the sight sent a cold shiver across her skin. “I told her that Brother Ephraim was on his way.”

The cold shiver became paralyzing dread. “Is he?”

DJ just smiled bigger. And drew a gun from beneath his jacket.

Rhoda’s heart stopped. This was it, then. The moment he killed her. “No. Not in front of her. Please.”

DJ laughed. “You made your bargain, Rhoda. I kept my end. You’re both here. Out of Eden.” He lifted the gun, but to Rhoda’s horror, he pointed it at Mercy.

Rhoda threw herself over her child. “No! You promised!”

“I promised to get you out. I never promised to let you live.” Leaning over, he pulled Rhoda away from Mercy as if she weighed nothing.

She expected a loud blast, but all she heard was a little pop.

Silencer, she thought dully. He planned this. He never intended to let either of us go.

Mercy’s body jerked and a bright red stain began to spread on the front of her dress.

“No.” No, no, no. Rhoda was sobbing, reaching for her daughter, but DJ held her just far enough away. “Mercy? Mercy. Please. Open your eyes. Please.”

“Say goodbye to Mama,” DJ said mockingly as he pressed the gun to Rhoda’s abdomen.

Rhoda’s body jolted, a searing pain exploding in her gut. She screamed, unable to contain the excruciating pain. How was Mercy not screaming?

But she wasn’t. Her daughter lay on the ground, staring up at her.

She was still breathing, though. She’s still alive.

“Shut up, Rhoda,” DJ snarled. “She’s not going to find anyone. She’s going to die here. Just like Gideon did. Just like you are.”

DJ shrugged. “Whatever.” He tried to yank her to her feet, but her knees buckled.

“Ephraim will kill you for this,” she rasped.

That made no sense, but Rhoda’s mind was spinning out of control and not much made sense. “Why are you doing this?”

“Because I can.” He tightened his hold on Rhoda’s arm and dragged her to the truck, hefting her to her feet, leaning her against its side. “Watch, Mercy.”

He pressed the barrel of the gun to Rhoda’s temple. This was it, then. “Say bye‑bye, Rhoda,” he said, humor in his voice.

“Selena,” she gritted out. “If you’re going to kill me, at least have the guts to say my name. Selena Reynolds.”

Watch, Mercy. Brother DJ had commanded it, so Mercy obeyed as she’d been taught to do. She watched, a scream frozen in her throat. Mama! But her mother didn’t answer because her mother was gone.

Her mother had collapsed against the side of the truck, a hole in the side of her head. For a moment she stared at Mercy, her eyes wide.

And then Brother DJ lifted her mother’s body, his arm under her legs, and tossed her over the side of the truck into the bed. The bed where he’d taken her mother three times since they’d left Eden.

The only home Mercy had ever known.

DJ hadn’t been gentle, but it was still better than . . . him. Brother Ephraim.

My husband. Just thinking the word made her shudder. And he was on his way. Brother DJ had told her so. Ephraim would find her here. He probably wouldn’t kill her. Although she’d wish he would.

She always wished he’d just kill her, but he never did.

Brother DJ rubbed his bloody hands on his pants and began walking her way. “Come on, Mercy.”

She just stared up at him, unable to say a word.

He leaned down, grabbed her arm, and forced her to stand, but her legs were like limp noodles. She hurt, everywhere. Her abdomen burned. She pressed her palm to her body, then stared at it dully. Her palm was covered in blood. I’m bleeding. Because he shot me. It was like a dream. Not real. Except it was. Her mother was dead. And I’m bleeding.

She continued to stare. She’d heard Ephraim use that “F”‑word, but only when he was really angry. Never in as casual a tone as Brother DJ’s.

He began to drag her toward the truck and she suddenly understood what he planned to do.

He’s going to kill me, too. He never intended to let either of us go. But why had he driven them all the way here? Wherever here was. The sign said Redding Bus Terminal. She knew what a bus was, but despite being able to read the other two words, she didn’t understand them.

They’d driven for hours. Why come all this way only to kill us both? He could have stopped at any time and killed them on the side of the road.

He was toying with us, she realized. Making her mother believe that Mercy would be free. Her mother had been so hopeful. Now she was dead.

Mercy squinted when bright lights abruptly blinded her. A car.

Another car had appeared and was pointing its lights at them. “Fuck!” Brother DJ cursed again. He lifted his gun, pointing it at the bright lights. He fired once, then dropped her arm when blue lights began flashing above the bright white lights. “Cops.”

He ran to the truck, firing at Mercy again. Every nerve ending in her leg sparked, the shot hitting her midcalf. She opened her mouth to scream, but no sound would come.

Brother DJ got in his truck and sped away, firing a final time, but the bullet missed her, hitting the asphalt near her head. Shards of stone exploded from the road, and little pricks of pain licked at the side of her face.

And then it was quiet, the only sound the soft motor of the car that had spurred Brother DJ to run.

Who were bad. They’d hurt her. Beat her. Take her to prison. Make sure she never saw daylight again. If they ever catch you, say nothing. Admit nothing. Never tell about the community. Never say “Eden.” The threats she’d heard a thousand times from her teachers in the community spun in her mind like a tornado, giving her a rush of energy. Get away. She had to get away.

The World of Robert B. Parker's Spenser and the Birth of the 1970's Private Detective 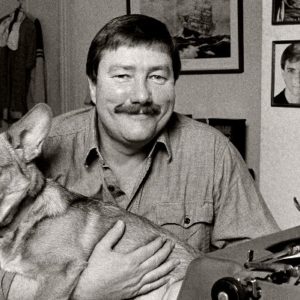 The World of Robert B. Parker's Spenser and the Birth of the 1970's Private Detective The 1970s detective would not be an American pacifist ready to burn his draft card down on Main Street, nor would he be a Lieutenant...
© LitHub
Back to top