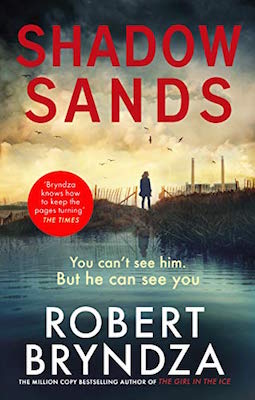 The following is an exclusive excerpt from Shadow Sands, by Robert Bryndza. When criminologist Kate Marshall takes her son for a scuba-diving adventure, she doesn't expect that they'll find the waterlogged body of a teenage boy. The police are quick to name it a tragic accident, but when Kate digs deeper, she stumbles on the trail of a serial killer, and a myth of a phantom who trolls the foggy coastlines, looking for victims.

Kate Marshall took a breath and dove into the cold water. She came back to the surface and bobbed for a moment, the rocky Dartmoor landscape and gray sky hovering above the waterline in her diving mask; then she sank down into the reservoir. The visibility underwater was good. Kate’s teenage son, Jake, was first in and was treading water below her, the air bubbles rising from his regulator. He waved and gave her a thumbs-up. Kate waved back, shuddering as the cold trickled into her wet suit. She adjusted her regulator and took her first tinny breaths of oxygen from the tank on her back. It tasted metallic on her tongue.

They were diving at Shadow Sands, a deep man-made reservoir, a couple of miles from where Kate lived near Ashdean in Devon. The algae-covered rocks they’d jumped off banked steeply away, and the cold and gloom increased as she followed Jake deeper. He was now sixteen, and a sudden growth spurt in the past few months had made him almost as tall as Kate. She kicked out strongly to catch up to him. At thirteen meters, the water took on a gloomy green hue. They switched on their headlamps, casting arcs of light around them that didn’t manage to penetrate the depths. A huge freshwater eel appeared out of shadows rippling between them, its blank stare caught in the light of their lamps. Kate shrank away from it, but Jake didn’t flinch, watching with fascination as the eel ribboned close to his head and back into the shadows. He turned to her, raising eyebrows behind his mask. Kate pulled a face and gave him a thumbs-down.

Jake had been staying with Kate for the summer, arriving after he sat his GCSE exams. In June and July they’d taken scuba lessons from a local diving school, and they’d been on several diving trips out to sea and to a sunken cave on the edge of Dartmoor with a phosphorescent, glowing wall. The Shadow Sands reservoir had been created in 1953 by flooding a valley and Shadow Sands village, and Jake had seen online that it was possible to dive down and see the sunken ruin of the old village church.

There was something eerie about floating above what once had been a village.

They were diving at the top end of the reservoir, a mile away from the sluice gates that drew water through two enormous turbines to generate electricity. There was a small area that was cordoned off for diving. The rest of the reservoir was strictly out-of-bounds. Kate could hear the low hum of the far-off hydroelectric plant, which was an ominous sound in the cold and dark.

There was something eerie about floating above what once had been a village. She wondered what it looked like down there. Their headlamps were lighting up nothing but silt and murky green water. She could imagine the once-dry roads and houses below them, where people used to live, and the school where children played.

Kate heard a faint beep and checked her dive computer. They were now at seventeen meters, and it beeped again with a warning to slow their descent. Jake reached out and grabbed her arm, making her jump. He pointed downward, to the left. A large, solid outline was emerging from the gloom. They swam toward it, and as they drew closer, Kate could see the huge curved dome of a church tower. They stopped a few feet from it, their headlamps illuminating a mass of freshwater  crustaceans covering the dome. Below the dome, Kate could see the bricks of the church tower furred green with algae, and the arched stone windows. It was eerie to see this man-made structure, which once towered so high, so far down in the water.

Jake unclipped a waterproof pouch containing a digital camera from his belt and took a few photos. He looked back at Kate. She checked her dive computer. They were now at twenty meters. She nodded and fol- lowed him to the window. They hovered outside for a moment, the silt in the water thicker as they peered into the vast, empty cavity of the old bell tower. Crustaceans covered every inch of the inside walls, bulging out in places. In spite of the thick layer, Kate could make out the con- tours of the curved vaulted ceiling. The tower had four windows, one on each face. The window to the left was teeming with crustaceans, and the window to their right was almost completely blocked up, leaving a small arrow slit that reminded Kate of a medieval castle. The window opposite was clear, looking out into the dim green of the water.

Kate swam through the window into the tower. They stopped in the center, and she swam up to get a closer look at the vaulted ceiling. One of the beams that would have held the church bells ran across one side of the ceiling. The crustaceans had covered this, and they had matched the ceiling’s arched contours. A huge freshwater crayfish, more than a foot long, appeared from under the beam and scuttled across the ceiling toward her. Kate almost yelled out in shock as she jerked back, grabbing at Jake, her arms flailing in slow motion. As the crayfish passed above, its legs rattled on the shells of the tightly packed crustaceans. It stopped above them. Kate’s heart was now pounding. Her breathing increased, and she drew hard on her oxygen supply.

The crayfish’s antennae twitched, and it scuttled across the vaulted ceiling and vanished through the window opposite. Kate noticed something floating outside the window where the crayfish had escaped. She swam closer, her headlamp lighting up the heels of a pair of bright-red trainers. They shifted in the water at the top of the window.

Kate felt a surge of fear and excitement. She kicked out, and using the stone arch, she slowly pulled herself through the window. The shoes were directly above the opening and connected to the feet of a dead body, suspended in the water, like it was standing up, next to the church dome.

Jake had followed her through the window, and he jolted back, his head hitting the wall of the tower. Kate heard his muffled cry, and a spray of bubbles from his regulator crowded her vision. She reached out and grabbed him, unable to get a proper grip because of his oxygen tank. She pulled him away from the tower. Then she looked back at the body.

It was a young man. He had short dark hair and wore blue jeans with a silver buckled belt. On his wrist was a smart-looking watch. The remains of a ripped white T-shirt floated in strips around his neck. He had a well-built, athletic frame. His head was flopped forward, and his face, chest, and bloating belly were covered in cuts and lacerations. What most unsettled Kate was the look on his face. His eyes were wide open, with a look of fear. He was still, but suddenly his neck shifted and pulsed. She felt Jake grab at her again, and for a horrible moment, Kate thought the boy was still alive. His head twitched, and his jaw swung open as a black, shiny eel appeared between his broken teeth and emerged, seeming to ooze from his open mouth.

Excerpted from Shadow Sands by Robert Bryndza with permission from the publisher, Thomas & Mercer. Copyright © 2020 by Raven Street Ltd. All rights reserved. 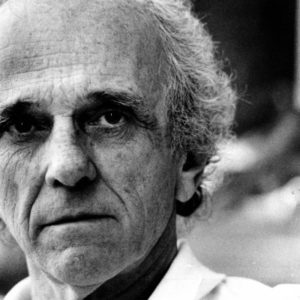 Rubem Fonseca: Modernist Crime Fiction's Reluctant Star A few years before his death from a heart attack, which he suffered last April, the renowned Brazilian crime writer Rubem...
© LitHub
Back to top