She Lover of Death 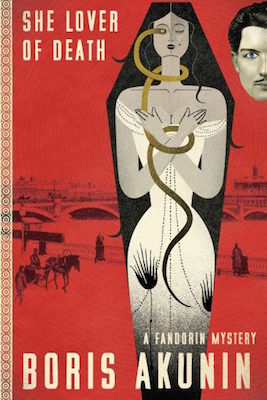 The following is an exclusive excerpt from She Lover of Death, by Boris Akunin. Aristocratic Inspector Erast Fandorin is back, this time, looking into a turn-of-the-century suicide cult run by poets. Fandorin infiltrates the group, hoping to protect Russian youths from throwing their lives away, but will he instead fall victim to the cult’s mysterious seances and their doom-laden instructions?

She spent several hours preparing for her meeting with Harlequin and left the house in good time, in order to make her first gala promenade through the streets of Moscow without hurrying and give the city a chance to admire its new inhabitant.

The two of them—Moscow and Columbine—made a great impression on each other. On this overcast August evening  the  former  was  jaded,  bored  and  blase´;  the  latter was wary and nervous, ready for any surprises.

For the Moscow premiere Columbine had chosen an outfit the like of which no one here could possibly have seen before. She didn’t put on a hat, because that was a bourgeois prejudice; she let down her thick hair and tied it with a broad black ribbon, gathering it together at the side, below her right ear, with a magnificent bow. She put on a crimson waistcoat with silver stars over her lemon-yellow silk blouse with Spanish sleeves and a frilly jabot; her immense skirt of opalescent blue with countless pleats swayed like the waves of the ocean. An important detail of this daring costume was an orange sash with a wooden buckle. All in all, there was plenty for the Muscovites to look at. And certain individuals who looked really closely were in for yet another shock: on closer inspection, the black glittering ribbon on the neck of this breathtakingly spectacular stroller proved to be a live snake, which would occasionally turn its narrow head this way and that.

Accompanied by gasps and squeals, Columbine strode haughtily across Red Square and across the Moskvoretsky Bridge, and turned on to the Sofiiskaya Embankment, where the respectable public was out strolling. And here, in addition to showing herself off, she gazed around wide-eyed, gathering new impressions.

For the most part the Moscow ladies were dressed rather boringly: a straight skirt and white blouse with a necktie, or silk dresses in dreary dark tones. She was impressed by the size of the hats, which this season seemed especially luxuriant. She encountered hardly any extravagant ladies of any age, except for one, with a gauze scarf fluttering over her shoulder. And there was a horsewoman with pearly ash-grey hair under a veil, who rode past, holding a long amber cigarette holder with a papirosa. Stylish, Columbine thought, as she watched the woman ride away.

There proved to be no small number of young men in Moscow with smocks and berets and long hair, and a large bow on their chests: she even called out to one after mistaking him for Petya.

She deliberately arrived at the rendezvous twenty minutes late, for which she had to walk back and forth along the entire length of the embankment twice. Harlequin was waiting beside a fountain where the cabdrivers watered their horses and he looked exactly the same as in Irkutsk, but here among the granite embankments and closely crowded houses, Columbine felt that this was not enough. Why had he not changed in all these months? Why had he not become something bigger, or something new, or something else?

And somehow the way Petya behaved wasn’t quite right either. He blushed and faltered. He was about to kiss her, but he couldn’t bring himself to do it—instead he held his hand out in an absolutely fatuous manner. Columbine stared at his hand in jaunty incomprehension, as if she had never seen anything funnier in her life. Then he became even more embarrassed and thrust a bunch of violets at her.

‘Why would I want these corpses of flowers?’ she asked with a capricious shrug of her shoulders. She walked over to a cabby’s horse and held the little bouquet out to her. The roan mare indifferently extended her large flabby lip over the violets and chewed them up in an instant.

‘Quick, we’re late,’ said Petya. ‘They don’t like that in our set. The horse-tram stops over there, just before the bridge. Let’s go!’

He glanced nervously at his companion and whispered.

‘Everybody’s looking at you. In Irkutsk you dressed differently.’

‘Do I alarm you?’ Columbine asked provocatively.

Could he really be embarrassed by me? she wondered in amazement. Did harlequins even know how to be embarrassed? She glanced round at her reflection in a brightly lit shop window and flinched inwardly—it was a very impressive outfit indeed—but the attack of shyness was dismissed as disgraceful. That pitiful feeling had been left behind for ever beyond the branching Ural mountains.

In the tram, Petya told her in a low voice about the place where they were going.

‘There isn’t another club like it in the whole of Russia, even in St Petersburg,’ he said, tickling her ear with his breath. ‘Such people, you’ve never seen anyone like them in Irkutsk! We use special names, everyone invents his own. And some are given their names by the Doge. For instance, he christened me Cherubino.’

‘Cherubino?’ Columbine echoed in a disappointed voice, thinking that Petya really was more like a curly-haired pageboy than a self-confident, imperious Harlequin.

Petya misinterpreted the intonation of her voice and drew himself upright haughtily.

‘You mean to say you’ve never heard of the ‘‘Lovers of Death’’?

‘That’s nothing. We have more bizarre aliases than that. Avaddon, Ophelia, Caliban, Horatio. And Lorelei Rubinstein . . .’

‘What, you mean Lorelei Rubinstein herself goes there?’ the young provincial gasped. ‘The poetess?’

There was good reason to gasp. Lorelei’s sultry, shamelessly sensual poems had only reached Irkutsk after a considerable delay. Progressive young ladies who understood modern poetry knew them off by heart.

‘Yes,’ said Cherubino-Petya, nodding portentously. ‘Her alias in our group is the Lioness of Ecstasy. Or simply Lioness. Although, of course, everyone knows who she really is.’

Ah, what a sweet tightness she felt in her chest! Liberal-handed Fortune had flung open before her the doors into the most select possible society, and she looked at Petya far more affectionately now.

He continued. ‘The leader of the club is Prospero. There aren’t many men like him—not one in a thousand, or even a million. He’s already getting on, his hair is completely grey. But you forget that straight away, he has such strength in him, such energy and magnetism. In biblical times the prophets were probably like him. And he is a kind of prophet, if you think about it. He’s one of the old prisoners from the Schliesselburg Fortress; he spent a long time in a cell for revolutionary activity, but he never talks about his former views, because he has abandoned politics completely. He says politics is for the masses, and nothing of a mass nature can be beautiful, for beauty is always unique and inimitable. Prospero looks rather severe and he is often abrupt, but in actual fact he is kind and magnanimous, everybody knows that. He secretly helps those aspirants who need money. He used to be a chemical engineer before he was in the fortress, but now he has been left an inheritance and is rich, so he can afford it.’

‘That’s what the members of the club are called. We’re all poets. There are twelve of us, always twelve. And Prospero is our Doge. That’s the same thing as a chairman, only a chairman is elected, and in this case it’s the other way round: the Doge himself chooses who to accept as a member and who not.’

‘But if there always have to be twelve of you, what about me? That makes me superfluous.’

Petya replied mysteriously: ‘When one of the aspirants marries, we can fill the place that is vacated with someone new. Naturally, the final decision is taken by Prospero. But before I take you into his home, you must swear that you will never tell anyone else what I have told you.’

Married? Vacated place? Columbine didn’t understand a thing but, of course, she immediately exclaimed: ‘I swear by sky, earth, water and fire that I shall say nothing!’

People on the seats nearby half-turned to look at her and Petya put one finger to his lips.

‘But what do you do there?’ asked Columbine, dying of curiosity.

The reply was triumphant.

‘We serve the Eternal Bride and dedicate poems to her. And some fortunate Chosen Ones offer up to her the supreme gift – their own life.’

‘And who is the Eternal Bride?’

His reply was a single short word, at the sound of which Columbine’s mouth immediately went dry.

‘But . . . but why is death a bride? After all, some of the aspirants are women—Lorelei Rubinstein, for instance. Why should she want a bride?’

‘We just say that because in Russian ‘‘death’’ is a feminine noun. It goes without saying that for women Death is the Eternal Bridegroom. In general everything about the club is highly poetic. For the male aspirants Death is like La Belle Dame sans Merci, or the Beautiful Lady to whom we dedicate our poems and, if necessary our very lives. For the female aspirants Death is a Handsome Prince or an Enchanted Tsarevich, it’s a matter of taste.’

Columbine wrinkled up her brow in concentration. ‘And how is the rite of marriage performed?’

At that Petya glanced at her as if he were gazing at some wild savage with a bone through her nose. He narrowed his eyes incredulously.

‘You mean to say you’ve never heard of the ‘‘Lovers of Death’’? Why, all the newspapers write about it!’

‘I don’t read the newspapers,’ she declared haughtily, ‘It’s too ordinary.’

‘Good Lord! So you don’t know anything about the Moscow suicides?’

‘Four of our people have already become wedded to Death,’ said Petya, moving closer, with his eyes gleaming. 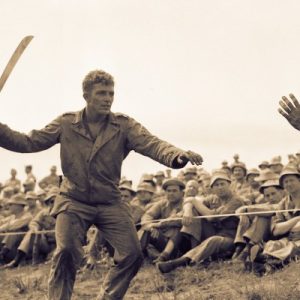 How to Write Believable, Realistic, and Responsible Violence “All fiction arises from conflict,” a professor once told me, and I believe that’s true. If the conflict in a story...
© LitHub
Back to top