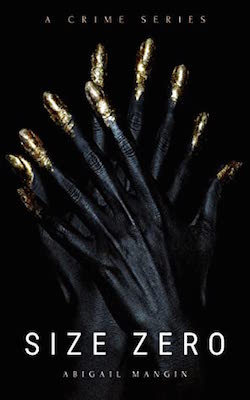 The following is an exclusive excerpt from Size Zero, by Abigail Mangin. When a coat made of human skin is worn down a runway, it turns out to have been fashioned from the body of a missing girl who disappeared a decade before in her wealthy ex boyfriend's apartment. Her ex-boyfriend, now a monk, and an ex-model must go undercover and find out what really happened, all those years ago.

The dining room table was set for one, adorned with pussy willow branches and white rose petals. The table was a glass aquarium filled with rainbow corals and piranhas. Their teeth jutted out like angry toothpicks. The air smelled of beach: fish and caviar, sand and seaweed.

“My jet leaves in an hour.” She unfurled her red napkin and it waved toward him like a matador’s red cape. It was a warning. “Sit,” she said.

“Sit,” she repeated. “I have some advice for you. I want to give you a parting message in case you die,” she said with a half-smirk.

His hands brushed over the roses on the table—how similar the petals felt to the flesh on a woman’s wrist. Perdonna’s eyes lingered like a cloudy sunset above the pussy willow buds.

“Someone put a microphone on me at the club,” Cecil said. “I just don’t understand. What could I have done to deserve this? Do I have an evil face? Home is hell for me.”

“There’s no place like home,” she said wistfully. “Unless you live in North Korea. Or Syria. Or most of Africa.”

Cecil chuckled despite himself. “My life could be worse, huh?”

“Much worse, bellino. Much worse.”

A rattling sound echoed from inside one of the covered silver platters on the table.

Perdonna shook her head. “God made it.”

The rattling continued, not different from the sound of rats scurrying through walls or subway tunnels.

He tried to lift the lid, but Perdonna placed her hand on his. “We have some time. No rush.” Her thumb stroked the tops of his knuckles. His hand never moved from the silver lid for fear that if he even flinched, she’d stop stroking him and he’d lose that familiar serenade of her pulse.

“You stare at my eyes too much,” Perdonna said, moving the pussy willows from her face. “I can see a bit, you know?”

Cecil felt his pulse speed up. “All men stare at you.”

“Not at my eyes,” she said, a light rose-gold glitter coloring her cheeks. She looked up to the reflective ceiling. “Even mirrors refuse to look me in the eye.”

A sloshing sound ricocheted from the other silver platter. Salt seeped into their nostrils. Swish. Swash. He felt like drowning.

When she removed her thumb from his, he saw goosebumps dotting the skin of her neck, like sand granules around her pearls.

“I hate that eating has become so complicated.” She fingered her fork. “We used to eat for fuel. We ate because we were animals that needed to fight for life. Today, the rich eat for pleasure. We drink wine because it’s sensual, eat sugar because it makes us feel sweet… Sometimes I just want to have to eat.”

Vanilla-infused drops of sweat trembled on her chest with each of her breaths.

Perdonna’s hair tumbled out of her bun like a crashing wave. A gust of perfume escaped her as she stroked his ear with her forefinger. “Ask me what you want to ask me,” she whispered.

The red scars around her eyes seem to glow like coils on a hot stove.

She finally lifted the lid. Spotted red shrimp danced upon a garnish of ivy leaves and conch shells. Angry red whiskers writhed against insect-like legs. They might as well have been tarantulas.

“I think someone forgot to cook them,” he said.

She used silver tongs to place the live shrimps on their plates. The critters tried to scurry away, but were stopped by an ornate lip on the plates.

Perdonna grabbed her shrimp by the tail, and with no hesitation, she tore the shrimp’s head from its body. Juice rained onto the plate. The tail contracted and writhed, decapitated. But the head remained alive, still moving its tiny mouth. Flicking its antennas like a dying butterfly would.

She put the eyes in her mouth and sucked, lips glistening with juice. Her tongue flicked around the head. And her gaze never left Cecil’s.

The tail went into her mouth whole.

“You’re going into The Mall with a false sense of security,” Perdonna said. “You think God will keep you safe. But he won’t. Not necessarily.”

Snap. He split the shrimp in two and felt half its life break in his hands. The tail felt gooey in his mouth, and the twitching legs tapped his teeth like fingertips. When he sucked at the head, he felt the pulsing muscles on his tongue. The heartbeat. He could see the shrimp’s fearful eyes below his nose. But he slurped the salty juice.

His jeans tightened around his crotch.

“How involved are you in all this?” Cecil asked. “How much power do you have? How—”

“I have power today because the wind blew in my direction,” she said. “Tomorrow, I may very well be the shrimp.”

She opened the last platter, and a slimy leg crawled up the silver. Tentacles and suckers sloshed and slurped.

With white chopsticks, Perdonna fished her octopus out of the water. She gripped the tentacles hard and twirled them around the sticks like she would spaghetti around a fork.

“The trick is to bite the head hard and fast, killing the central nervous system. If the suckers latch on to your tongue and cheeks, it becomes difficult to swallow.”

She slid the octopus into her mouth headfirst and munched for what felt like minutes. The octopus refused to go down without a fight.

When she finished, her chest was flushed, and her lips were swollen red from gnashing the octopus to death.

“Your turn,” she said with a smirk.

Perdonna fished the second slimy mollusk out of the water and put it on his plate. Purplish with a bulbous head, the squirming sack of mucus hardly looked appetizing.

Cecil tried to hold the creature in his hand, but it slipped away and rushed down the table.

“Fish are friends, not food,” he chided. “Because food doesn’t run away.”

The octopus wrapped around two of Perdonna’s fingers, and she carried it to him. “Open up,” she said.

Cecil laughed, eyes trailing down to her engorged lips. The tentacles slipped to his face from her fingers, and he opened his mouth. Slime dripped into his mouth, and he sucked the octopus off Perdonna’s fingers. Her warm pulse melted into the octopus’s cold meat.

“Don’t worry about biting my finger,” she whispered.

The muscled tentacles pushed against his cheeks, and he felt his throat contracting, trying to swallow the thing whole. He waged war in his mouth, with vanilla fingertips caressing him along. The metallic flavor of blood flooded his taste buds when he nipped Perdonna.

And it was delicious.

When she removed her fingers, Cecil felt the urge to reach out for her body, to whisper in her ear. But instead he asked, “Are you VD?”

“I have five minutes left with you. Is that really the question you want to ask me?”

No. But he couldn’t bring himself to ask what he truly wanted to know.

“Do you think I’m VD?” she asked genuinely.

The scars that marred her eyes seemed to disappear, leaving baby-soft skin. He traced his fingers over the fabric of her blouse, and he leaned in to hug her, feeling the cushion of her body.

“Do you trust me?” she whispered.

He swallowed hard, seeing the dark passion in her eyes. “Yes.”

His lips danced close to her mouth, but when he leaned in, she presented her cheek.

“Then I’m not going to tell you whether I’m VD,” she said. And as soon as her body broke from his, he felt empty again.

When they walked to the hallway, they found Immacolata red-faced, listening.

“Señora, your car is here. And you’re late,” she whispered and scurried away.

Her manicured nail tapped her Dial. “Well.” Perdonna’s lips brushed his cheek as the suitcases were carried to her car. “Goodbye, bellino. In bocca al lupo.”

“Into the wolf’s mouth.”

She paused for a moment and cocked her head. She looked like a cat careening toward a hummingbird. “Do you know what it means? I’ve been saying it to you for your whole life. But you don’t know, do you?”

“I assumed it was a cute threat.” 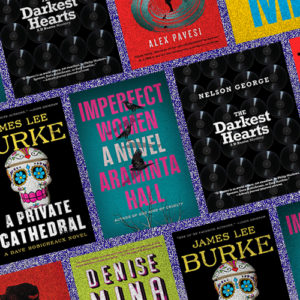 10 Novels You Should Read This August August brings another bumper crop of excellent crime fiction, and we'll be here all month helping you sort those reading...
© LitHub
Back to top