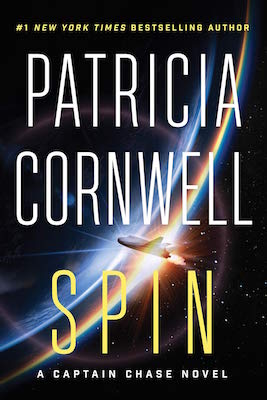 The following is an exclusive excerpt from Spin, by Patricia Cornwell. In the wake of a disastrous rocket launch, Captain Calli Chase has met her long-lost twin sister. And now she has to find out the truth about who they both really are.

The furnishings are the same as I remember, cheap pinewood painted white. A bed, a few chairs, and several framed beach prints on the scuffed pink walls.

I take in the kitchenette with its ancient drip coffee maker . . .

The vintage pink minifridge, a rust-spotted Coca-Cola bottle opener on the side . . .

I recognize the blue vinyl-upholstered sofa but not the non-reflective black robotic jumpsuit laid out on it, or the thruster jetpack propped in a corner near a large soft-sided carrying case. Next to the bed are a surgical lamp, and an IV stand hung with bags of fluid. On top of the bare mattress are folded disposable white sheets, black plastic flex-cuff restraints, and boxes of surgical gloves in different sizes.

Carme quick-releases the suppressor from her pistol, matte-black metal with rosewood grips, exactly like mine at home. Our gifts to ourselves for the holidays last year, the Bond Arms Bullpup delivers quite a wallop for a compact handgun, and when it comes to the barrel, size does matter. The longer, the more velocity, and if you do the math, that equals more stopping power and an explosive wound track.

She leaves the pistol, the suppressor near loaded magazines on a bedside table as I notice jugs of an oxi-action stain remover that can destroy blood and DNA, and there are spray bottles of disinfectants, rolls of paper towels. Carme grabs a packet of surgical gloves, peeling it open as she heads into the bathroom where cases of sterile purified water are stacked inside the tub.

“I assume that was you at the controls hijacking my GPS,” I talk to her through the open door.

“What you can be sure of is that you’re supposed to be here as long as you’re willing,” she says, deconning with an odorless disinfectant spray, spritzing herself, the bodysuit from head to toe. “Are you willing?”

“Obviously, not the ideal venue,” she sprays down a large green Yeti ice chest that looks like one we have at home in the basement. “I would prefer a place where the water’s not been shut off. But like Einstein said, the measure of intelligence is the ability to adapt.”

“And if you knew that someone, possibly an assassin, was following me, why would you lead him here and almost get us killed?” I ask as she washes up thoroughly with disinfecting soap, like a surgeon.

“I didn’t almost get us killed,” she opens another jug of sterile water. “You almost did by not being aware someone put a tracking device on your truck last night while it was parked at Fort Monroe,” she wipes herself dry on a sterile disposable towel.

“How do you know that for a fact? And who are you talking about?”

“I’m talking about the dead dude who parked his Denali out of sight near Vera Young’s apartment,” she says. “Going the rest of the way on foot, nobody seeing him as dark and deserted as it was,” working her hands into the surgical gloves. “It doesn’t take but a minute to attach one of those sticky-backed trackers to the undercarriage, the bumper. Meanwhile, someone’s doing the same thing to his unattended vehicle.”

That someone was Carme, and it would seem that while I was working Vera’s crime scene, my sister was in the area. No doubt moving about stealthily like she is right now, she placed a tracking device on the hitman’s truck while he was placing one on mine.

“But if you saw him do it, why wouldn’t you go right behind him and remove it?”

“He would have known it was gone,” she replies. “Now you’ve tipped your hand.”

“And if you can track him, who is he and where was he staying?”

“Don’t know because he didn’t go anywhere he might be staying, and it’s not my problem now.”

“But why have me lead him here?” I again ask as she body blocks my view, collecting something from the ice chest.

“Better than him following you home,” she offers that horrific thought, walking out of the bathroom, one hand held behind her so I can’t see what’s in it.

But I have a pretty good idea. And I don’t have to cooperate.

“He could have done that last night,” I remind her. “I left Fort Monroe and went straight home. It didn’t occur to me to scan my truck with my spectrum analyzer, and obviously I should have. I was none the wiser about the tracking device, and the point is he could have followed me home . . .”

“I wouldn’t have let that happen,” she interrupts. “Now shush! Take them off,” indicating my coat and gun belt. “There’s no time to waste. We’ve gotta get going.”

I do as she says just like I always have, placing my jacket and gun belt, my pistol, the Chinese assault rifle on top of the cigarette-burned white Formica coffee table. Nearby is a pair of gray-tinted sports glasses.

“Now or never?” Carme demands, and it’s like facing my doppelgänger or own reflection, both of us powerfully, compactly built except I tend more toward pudge unless I’m exceedingly careful.

We’re the same height, not too tall or short. Our hair is collar length and cut the same. But hers used to be shorter and less shaggy. And I notice she has reddish highlights just like mine, only hers aren’t natural.

“Now or never. What’s it going to be?” she says, and the deeper greenish tint to her eyes must be from contact lenses when neither of us needs them.

It’s as if Carme’s trying to look more like me when it’s always been me wanting to look more like her, and on closer inspection I recognize the patterns woven into her black speed-skater-looking skin. The smart fabric is loaded with sensors that interface with her environment, including the black electronic bracelet around her left wrist.

“What’s it going to be, Sisto?” Hugging me, she touches her head to mine, making our secret sign. “Now or never? You have to say which one.”

“Now,” I give my consent for what’s already begun.

“Going forward you won’t remember certain encounters when it’s best you don’t,” she rolls my left sleeve above my elbow. “Some results no one can be sure about,” and I feel a slight pinch near my cubital vein. “Some things are best forgotten . . . ,” the voice instantly far away. “If need be, erased . . . never to be restored . . .”

. . . Vaguely aware of the nonfragrant mist spraying over every inch of my body . . .

. . . But I can’t utter a sound or move my lips as something wet and cold is rubbed over my fingertips . . .

“. . . Think of it as an upgrade to your programming, dear . . . Of entering new dimensions with untold possibilities . . .”

The Best Crime Shows of the Decade 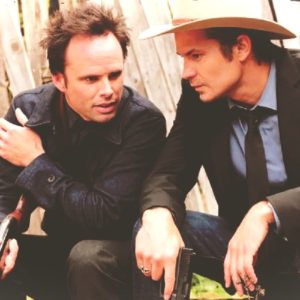 The Best Crime Shows of the Decade In all honesty, this article was meant to run as part of our best of the decade package at the end of 2019, but one thing...
© LitHub
Back to top