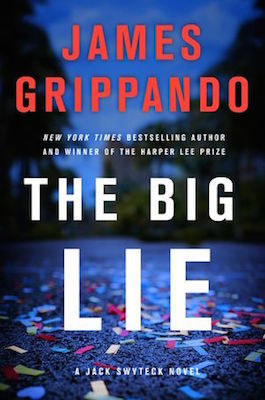 The following is an exclusive excerpt from The Big Lie , by James Grippando. Miami attorney Jack Swyteck has his hands full as an electoral college battle for the US Presidency winds up in his courtroom. He’s the last defense of democracy against President Malcolm MacLeod, the relentlessly corrupt and already-impeached incumbent who has won the Electoral vote by a small margin, and is determined to take the Executive Office back.

Jack lifted his gaze to the domed ceiling above the jumbotron, his attention drifting from the monotony onstage. Suspended high in the rafters, nestled in giant nets that stretched from one end of the arena to the other, thousands of shiny latex balloons hovered like red, white, and blue storm clouds ready to burst and bury the 4,763 delegates on the convention floor.

It had taken nearly a half century for the Democratic National Convention to return to Miami, and probably with good reason. The convention that had sent Senator George McGovern off to slaughter was remembered only for air-conditioning so faulty that delegates passed out from the South Florida heat, and organization so lacking that the acceptance speech was delivered after most of America had gone to bed. So uneventful was it that, just four years after clashing with Chicago Police and shouting, “The whole world is watching,” leaders of the antiwar movement spent most of the 1972 convention at the Poodle Lounge or the Boom-Boom Room at the Fountainebleau Hotel in Miami Beach talking about the good ol’ days.

“From my first day in office to my last,” the nominee droned on, “my primary mission as president will be to create more opportunity and more good jobs with rising wages.”

It was yet another stock line from Florida’s junior senator, which drew dutiful applause from the nation’s most enthusiastic Democrats, who were determined to make their nominee’s uninspired speech worthy of prime-time television. Some delegates on the convention floor looked on with adoration in their eyes and tears streaming down their faces. Jack could only guess what moment in party history they were reliving in their minds to tap such emotion. As for Senator Evan Stahl Jr., history would record that his ninety-minute speech had hit its high point roughly eighty-nine minutes before its ending, with “I accept your nomination with humility, determination, and boundless confidence in America’s promise.”

Jack was still counting balloons. There appeared to be an equal number of red ones, white ones, and blue ones. He wondered why. The American flag was mostly red and white.

“God, this is awful,” his father muttered.

Harry Swyteck had been Jack’s ticket to the convention. The former governor and his wife were guests of honor, but Jack’s step- mother was feeling under the weather, so Jack got the former First Lady’s ticket. Father  and son joined distinguished Democrats  in a mezzanine-level box that came with theater-style leather seats, flat-screen TVs, a wet bar, and waitress service. Had the arena been rocking for basketball instead of politics, not even a second mortgage on the house could have put these seats within Jack’s financial reach.

“So it’s not just me?” Jack  whispered.  He  and  his  father  were standing in the back by the bar, a semi-private area that was perfect for business talks that couldn’t wait until after the game, the con- cert, or whatever the event.

That was quite an indictment. Decades earlier, Harry had served in  the  state  legislature  with  Senator  Stahl’s  father,  where  they’d once combined to read the entire Tallahassee phone book into the record to filibuster a bill.

Harry didn’t answer, but Jack’s question was sincere. Evan Stahl was a skilled politician, and by all accounts he was living a charmed life.  Stahl had  been  a  three-time  NCAA  scholar-athlete  at  the University  of  Florida  and  a  Rhodes  Scholar,  then  earned  a  law degree  cum  laude  from  Harvard.  He’d  returned  to  Florida  with big  political  aspirations.  Marrying  the  daughter  of  a  Cuban immigrant  turned  multimillionaire,  the  ultimate  American  success story, certainly didn’t hurt his meteoric rise from state legislator to congressman to junior U.S. senator. As if to complete the presidential package, his wife had her own career as a hospital-based psychiatrist for the Florida Department of Law Enforcement, treating institutionalized  inmates,  but  still  finding  time  to  raise  a  nine- year-old daughter who was as smart and passionate as her mother.

It was the biggest speech of his life, and he was as flat as the Florida Everglades, his words lacking heart, as if his mind were elsewhere.

Some said that the senator was most effective in a town-hall setting, where he could engage directly with people. But never had he fallen on his face at the teleprompter the way he had tonight. It was the biggest speech of his life, and he was as flat as the Florida Everglades, his words lacking heart, as if his mind were elsewhere. “America is once again at a moment of reckoning,” the candidate continued. “Powerful forces are threatening to pull us apart. Bonds of trust and respect are fraying.”

Jack felt his father’s hand on his shoulder. “Moments like these make me truly sorry you had no interest in politics. You could do better than this with no script.”

Harry was right on one count: the political bug had never bitten Jack. Like three and a half million other Floridians, Jack was an independent with no party affiliation—a fact that Harry had kept quiet to get his son inside the building under the honored-guest invitation to the former governor “and guest.” Jack wasn’t exactly passionate about the Democratic candidate, but he was no fan of the incumbent, Malcolm MacLeod, whom Democrats had been threatening to impeach since retaking the House of Representatives in the midterm election. The House never did vote on impeachment, instead making a calculated strategic decision to oust him through the ballot box. MacLeod’s base rallied behind him, but rumors of corruption were so pervasive that most experts proclaimed him a one-term president. Heading into the summer conventions, pollsters projected a Democratic cakewalk to the White House. Pundits quite seriously proclaimed that it didn’t matter who the Democrats nominated, as long as the nominee managed to avoid indictment  for  a  capital  felony  between  the  convention  and  the general election in November.

The worry lines on his father’s face had Jack wondering if, as usual, the pundits were dead wrong.

“You know something, don’t you?” Jack said in a serious tone. “What is it, Dad?”

They retreated deep into the corner, farther out of earshot from the other guests. Harry kept his voice low as an added measure of privacy.

“I had a chat with Senior before dinner tonight,” said Harry, meaning Senator Stahl’s father. “He’s trying to talk his daughter- in-law out of suing for divorce.”

Black Power, Blaxploitation, & The Sounds of the Seventies 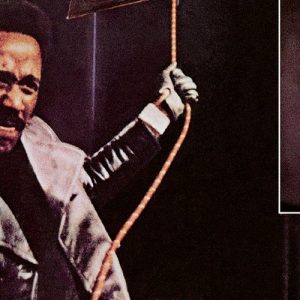 Black Power, Blaxploitation, & The Sounds of the Seventies You may have heard of the black private dick who’s a sex machine to all the chicks? Shaft? You damn right. From the day that...
© LitHub
Back to top