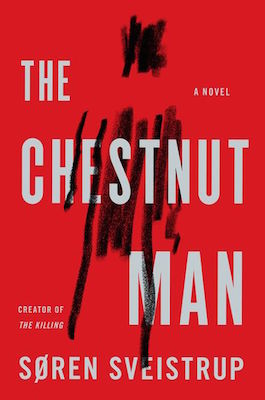 The following is an exclusive excerpt from The Chestnut Man, by Søren Sveistrup. A monstrous and attention-seeking serial killer has arrived in Copenhagen. He leaves a tiny handmade doll at the scene of each horrifying crime--but one of these dolls contains a clue. As investigators clash to try to identify and capture the killer, the discovery suggests that the stakes of this hunt may be even higher, somehow, than they had thought before.

Thulin gets Genz’s voicemail for the third time as she reaches the swing door. This time she leaves a terse message, making it clear that Genz should call back as soon as possible. The rain is still bucketing down outside, and as Thulin shrugs on her coat she de- cides it would be best to drive back to the station while she waits. By now they have confirmed that Hans Henrik Hauge left the trade fair the previous evening around nine thirty p.m. in his car, after having drunk a glass of white wine with one of his bosses and two colleagues from Jutland while they discussed a new firewall. After that, however, Hauge’s  alibi is shaky. He indeed checked into the motel, but nobody could say for sure whether his black Mazda6 was parked there all night. He could, in theory at least, have driven to the house in Husum and back, but as yet they don’t have enough evidence to justify investigating Hauge and his car more thoroughly—hence why she needs Genz and the results of his forensic tests promptly.

Hess has arrived at the morgue, emerging through the swing door. His clothes drip small puddles onto the floor, and he gives his soaking-wet jacket a shake.

“I couldn’t get hold of my property manager. Everything okay?” “Yep, all fine.”

Thulin strides through the swing door without glancing back. Emerging out into the rain, she jogs over to her car, trying to avoid getting wetter than absolutely necessary. She can hear Hess’s voice behind her.

“I don’t know where you’ve got to, but I can take statements from the victim’s workplace, or—”

“Nope, already done, so no need to worry about that.”

Thulin unlocks her car and climbs in, but before she can slam the door Hess catches up and blocks her. He shivers in the rain.

“I don’t think you understood what I said. I’m sorry about the delay, but—”

“I do understand. You screwed things up at the Hague. Some- body told you to clock in at the station here until you get the green light to come back, but you couldn’t care less about the job, so you’re just marking time while you do as little as possible.”

Hess doesn’t move. He just stands and stares at her with the eyes she still isn’t used to. “Well, today’s wasn’t exactly the tough- est assignment.”

“I’m trying to make things easy for you. You concentrate on the Hague and your apartment, and I won’t say anything to Nylander. Okay?”

Thulin glances toward the entrance, where the coroner has come outside and is standing under an umbrella.

“Genz says he can’t get through to you, but you’re to head to Forensics straightaway.”

“There’s something you’ve got to see. He says you need to see it or you’ll think he’s pulling your leg.”

The new, cube-shaped  headquarters of the Criminal Forensics Department is located in the northwest part of the city. It has begun to grow dark outside among the birch trees in the parking lot, but in the labs on the story above the large garage they’re still hard at work.

“Texts, emails, phone calls, have you checked all that?”

“The IT guys haven’t found anything significant yet, but any- way, that’s not as important as what I’ve got to show you.”

Thulin follows Genz, who has just fetched them from reception and confirmed that she and Hess are his guests. Hess insisted on coming along, but probably only so she can’t say he’s neglecting the investigation. In the car on the way over the man skimmed the autopsy report without much interest, and Thulin didn’t deem it necessary to discuss the case with him. The drive has put her on edge, and so has Genz’s cryptic reply, but he gives no sign of explaining further until they reach his lab.

There are large, frosted glass partitions everywhere. Forensics techs are swarming around their desks like small white bees, and a plethora of air-conditioning units and thermostats on the walls ensure that the temperature and humidity are kept at the correct level for the tests being conducted in the various glass compartments. It’s  at the Forensics Department that material gathered from any and every crime scene is examined and assessed. It’s of- ten the forensic evidence that determines the direction of a case, and during her short tenure on the murder squad Thulin has seen the Forensics Department carry out meticulous examinations of such various items as clothing, bed linen, carpets, wallpaper, food, vehicles, vegetation, and soil; in principle the list is endless. The coroner’s office and the Forensics Department are the two scientific legs of any investigation, and both identify the evidence that the prosecutor will later use to secure a conviction.

Since the 1990s, the Forensics Department has also been responsible for digital evidence, incorporating a subdepartment that investigates technological items belonging to victims and suspects. With the increasing focus on global cyber crime, hacking, and international terrorism, since 2014 its responsibilities have gradually been transferred to NC3, but for practical reasons the department still carries out smaller, local tasks itself, such as the examination of the computers and mobile phones from Laura Kjær’s home.

“What about other evidence? The bedroom, the garage?” Thulin stands impatiently in the big lab where Genz has taken them.

“No. But before I say more, I need to know whether we can trust him.”

Genz shuts the door and nods at Hess. Although Thulin is rather gratified that Genz is suddenly being so explicitly cautious about the stranger, it also takes her by surprise.

“What I have to say to you is big news, and I don’t want to risk the information getting out. It’s not personal, I hope you under- stand.” The latter remark is addressed to Hess, who remains ex- pressionless.

“He’s been taken on as an investigator by Nylander. And since he’s actually here, I’d say we can trust him.”

“I’ll take responsibility. Tell me what you’ve got.”

Genz hesitates a moment before turning to his keyboard and rapidly typing in an access code, while with his other hand he reaches for his reading glasses on the table. Thulin hasn’t seen Genz like this before, earnest and exultant at the same time. And she ex- pected a more sensational reason for his peculiar mood than the ordinary-looking fingerprint that now appears on the HD screen on the wall above the imposing desk.

“I found it quite by chance. We decided to brush the playhouse for fingerprints where the body had been placed, just in case the killer had supported himself on the posts, maybe cut himself on a nail or something. A waste of time, of course. It was teeming with prints, probably from all the children who use the playhouse. But for the same reason we did a routine check of the little doll, the chestnut man, because it was hanging so close to the body.”

“Genz, what is it that’s so important?”

“The print was on the bottom chestnut. On the bit you might call the body, I mean. It was the only one on the doll. I don’t know whether you’re aware of this, but when it comes to identifying fingerprints we normally look for ten points of comparison. With this print, unfortunately,  it was only possible to establish five points, because it’s  smeared. But five points ought in principle to be enough. Certainly it’s been sufficient in several court cases where—”

“Enough for what, Genz?”

As he spoke Genz was pointing out the five points on the finger- print with his electronic pen and the digital tablet on the desk, but now he puts down the pen and looks at Thulin.

“Sorry. Enough to establish that the fingerprint on the chest- nut man—at least, five points on it—are identical with Kristine Hartung’s fingerprints.”

For a brief moment Thulin forgets to breathe. She doesn’t know what bombshell she expected Genz to drop, but at least something in roughly the same solar system as hers.

“The match came from the computer as it gradually identified the five points. It happens completely automatically, because the material is connected to the database with thousands of prints from previous cases. Normally, of course, we’d like to see more points. Ten is most common, but as I say, five points is enough to—”

“Kristine Hartung is presumed dead.” Thulin has regained her poise, and when she continues her voice is exasperated. “The investigation concluded she was killed about a year ago. The case is solved, and the killer has been convicted.”

Genz removes his reading glasses and studies her. “All I’m saying is the print—”

“But it must be a mistake.”

“No mistake. I’ve been going over it again and again for the last three hours because I didn’t want to say anything until I was certain. But now I am. Going on five points of comparison, it’s a match.”

“What program are you using?”

Hess has risen from his seat in the background, where he’s been fiddling with his phone, and Thulin notices the new, alert expression on his face. She hears Genz guardedly explaining the dactyl- oscopic system he used, and she hears Hess confirm that it’s the same system used at Europol to identify prints.

Genz perks up, surprised and pleased to find his guest knows the system, but Hess doesn’t return his enthusiasm.

“Who is Kristine Hartung?” he asks instead.

Thulin looks up from the fingerprint on the screen and gazes into the blue-and-green eyes.

Interview with a Bookstore: The Raven Bookstore 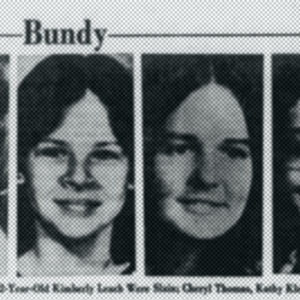