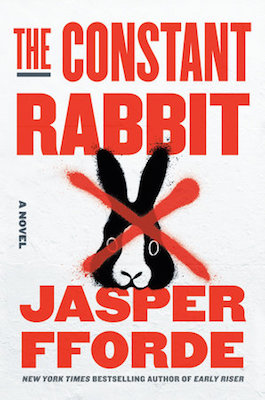 The following is an exclusive excerpt from The Constant Rabbit, by Jasper Fforde. It's 2022, and there are 1.2 million human-size rabbits living in the UK. When a family of rabbits moves into Peter Knox's charming village, most of the residents decide to leave. Peter finds he has a choice to make—but he soon learns that this is the least of his problems.

Rabbits always had trouble differentiating between humans. Hair colour, skin colour, clothes, gait, jewellery and voice all helped, but a lot of it was guesswork. In tests, eighty-two per cent of rabbits couldn’t tell the difference between Brian Blessed and a gorilla, if dressed in similar clothes.

Individual rabbit identification had always been an issue, right from the start. Fingerprints didn’t work as their paw-pads were hard and leathery, and DNA matching was pretty much useless as the rabbit gene pool was deplorably shallow. Mature bucks who’d been in several pistol duels could be recognised by the unique pattern of bullet holes in their ears – like an IBM punch card, as the joke went. But for   the most part, juveniles, unduelled bucks and females looked pretty much identical. Any rabbit—of Wild or Labstock—who was detained by the police or Compliance Taskforce required a ‘no mingling’ protocol as, once they got mixed up, it was impossible to say which was which.

But crucially, not all human eyes were blind to the complexities of rabbit physiognomy. Toby and myself and others—how many, it was never quite ascertained – possessed a gene anomaly that allowed us to differentiate between rabbits almost as well as rabbits themselves. As you’ve probably guessed by now, Toby and I weren’t lowly account- ants within RabCoT, we were a fundamental part of the Taskforce machinery. We were officially titled ‘Rabbit Identification Operatives’ but internally at RabCoT we were simply known as Spotters. Oddly, the skill was often discovered late: I only realised I had the talent when I noticed that the rabbit playing opposite Patrick Stewart in Waiting for Godot was the same one I’d seen playing Buttons to Les Dennis’s Widow Twanky in 1982. Then, recalling an online advertising campaign that offered ‘Dazzling Career Opportunities’ for anyone who could tell rabbits apart, I contacted the Rabbit Compliance Taskforce, passed their rabbit comparison test and, following a rigorous background check to ensure I had ‘no unhealthily positive attitude towards rabbits’, my career changed from Post Office Local Sorting Office Manager (Parcels) to RabCoT Spotter within a fortnight. To be honest, I didn’t really want a job in Rabbit Compliance as I’d never been leporiphobic, but was swayed by the good pay and final- salary pension options. Most of all, the work had job security. I could spot rabbits for as long as rabbits needed spotting, which as far as anyone could tell was, well, for ever.

So for eight hours a day, five days a week, Toby and I compared pictures of rabbits who for one reason or another—work, driving licence, detention, marriage, death, insurance claim, movement, prosecution, intelligence gathering—required confirmation of identity. For the most part it was fairly routine as rabbits either knew we  were watching so didn’t trouble to swap identities or were inherently honest. But occasionally we came across a rabbit who claimed to be a rabbit they weren’t. Spotter slang dubbed them a Miffy.

I logged in and started to work, the ‘target’ and ‘source’ pictures coming up in pairs on my screen. I allocated a percentage likelihood they were the same rabbit: one hundred per cent for a certain match, zero per cent for a certain non-match and everything in between. I was quite good at it. In testing I could spot a Miffy with ninety-two per cent accuracy, up from sixty-six per cent when I started. But it wasn’t an exact science. Any rabbit that got less than seventy-five per cent was referred to other Spotters and the scores aggregated using an algorithm to decide identity compliance.*

‘There you go,’ said Whizelle, who had returned with the teas. ‘Keep a close eye on the screens, lads, there’s been a lot of background chatter on Niffer, and while we’ve no idea what’s being said, the increased traffic might suggest something is going on, so remain vigilant.’

We acknowledged the intel—and the teas—then resumed our work, which while seemingly easy, wasn’t totally straightforward. Of the eighteen rabbits elevated to humanness at the Event, there were three distinct sub-groups: Wildstock, Labstock and Petstock. Petstock were the simplest to identify with their varied markings, easy enough for even a layperson. The brown-furred generic Wildstock variety were much harder—and Labstock harder still as they were always white with red eyes. Comparing the capillaries in the Labstocks’ ears was a pet project of mine and had won me the Taskforce Adequate Conduct Award seven years previously along with a rare word of encouragement from the Senior Group Leader. Despite the benefits, Ear Capillary Identification had one major drawback: the subject usually needed a bright light behind them, which they almost never had.

‘Shit,’ said Toby, echoing my thoughts, ‘these Labstocks are a bitch to tell apart.’

We continued working and for the next hour there was nothing but positive IDs, then a few around the fifty per cent mark. At a little after 11.30, I had my first Miffy of the day.

‘Bingo,’ I said as I stared at two pictures that were almost certainly not the same rabbit, ‘there’s a Petstock claiming to be one Randolph deBlackberry up in Berwick.’

There had been three Petstock rabbits anthropomorphised at the Event, house pets named Hercules, Blackberry and Buttercup. Only the last two still had clear and uninterrupted bloodlines. The ‘Von Hercule’ family died out during the Great Petstock Dynastic Exchange of Discourtesies** of 1980–88, and although several hundred carried the family’s notable black fur either wholly or in part, none carried the name. The deBlackberrys won the struggle for aristocratic dominance but it didn’t make them any more popular. Most Petstocks were greeted with suspicion by the Wild and Labstock members of the rabbit community—too cosy with humans in the past, it was said.

The all-white McButtercups, for their part, generally kept themselves to themselves, the way they liked it.

I gave the Miffy a four per cent, and Flemming asked Toby whether he concurred, which he did, so Flemming signed the warrant and Whizelle picked up the phone to coordinate the arrest of the rabbit on charges of identity fraud. Whizelle had done this before many times on my eye testimony, so the consequences of the unseen arrest and its aftermath were no longer something I worried too much about. The first month maybe, but not any more. Rabbits can be criminals too.

The excitement over, Flemming returned to her office and Whizelle busied himself with the paperwork, of which there was a lot. I took  a break and then, out of a sense of curiosity regarding Connie rather than because of Victor Mallett’s pleas, looked up ‘Clifford Rabbit’ on the RabCoT database. There were two thousand of them, so I narrowed it down to those off-colony and living in Herefordshire. This threw up three hits: one who was single, another who was currently doing time for ‘insider trading on collateralised carrot obligations’*** and one who lived in a temporary address for legal off-colony rabbits in Leominster. I discovered this last rabbit had been married almost exactly a year, and there she was: Constance Grace Iolanthe**** Rabbit, and I double-checked to make sure it was her by accessing her mugshot from the Rabbit Employment Database.

Reading further I learned that she was two years older than me and second generation from the Event. She was a respectable eight short of the rabbit’s ten-child policy, and was twice widowed, which was not unusual. The buck rabbit’s propensity for duelling prior to the breeding season could often have fatal results.

‘What you got there?’ asked Whizelle, looking over from his desk. I explained that a rabbit had turned up in our village and I wanted  to know who she was.

** The closest thing to a war amongst rabbits. The high point of the hostilities was Anton Von Hercule’s fourteen-hour ‘less than polite’ rant in July 1987, which was met by a barrage of sarcasm that is still talked about today, usually in hushed tones.

***Your guess is as good as mine on this

****Rabbits were quite big into Gilbert and Sullivan operas, despite not having good singing voices. Few, if any, would even attempt The

Crime and the City: Palermo, Sicily

Carlos Castaneda: The Mysterious Life of a Guru in 1970s California 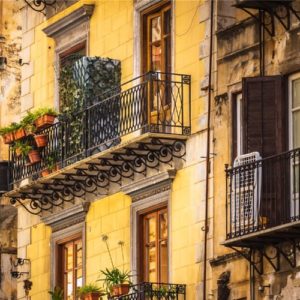 Crime and the City: Palermo, Sicily Palermo is a city that has known more than its fair share of violence and crime. An ancient city, a crossroads of the Mediterranean,...
© LitHub
Back to top